Date:
04 Dec. 2020
Changed on 26/07/2021
From surgical simulators to the use of diving masks for patients with Covid-19; from Harvard University to Strasbourg University Hospital; and from Inria research laboratories to the world of start-ups - Stéphane Cotin’s career has been sprinkled with success. Let’s take a look back at the achievements of the director of the MIMESIS project team, who is also an Inria ambassador and an expert in medical simulation. 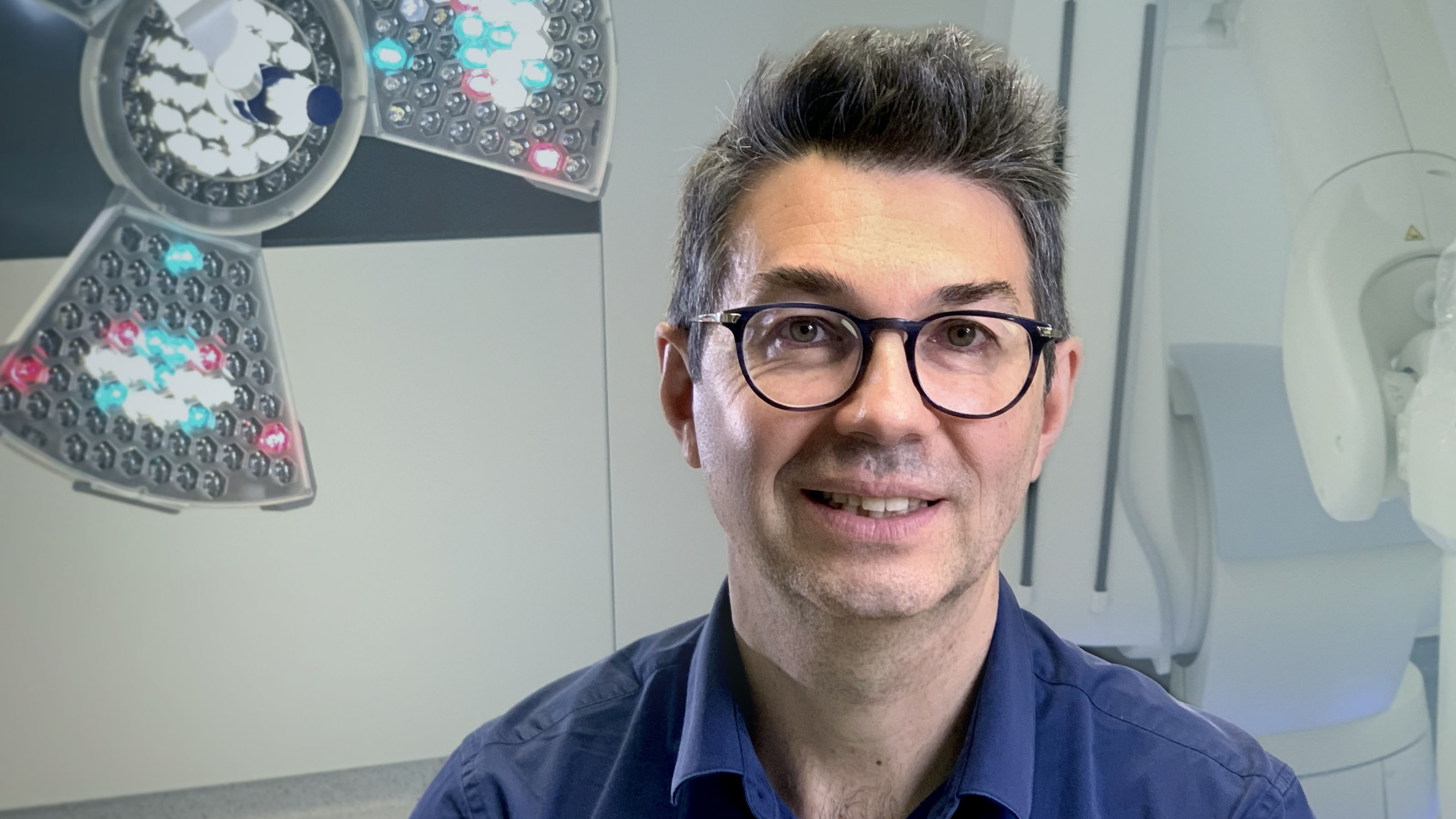 In the spring of 2020, intensive care units in Strasbourg came under severe strain as a result of the COVID-19 pandemic, putting doctors and scientists under pressure to come up with a solution. In response to a shortage of breathing apparatus, a research team in Italy seized the initiative, adapting diving masks on sale in Decathlon stores to make them suitable for use in hospitals. In Strasbourg, in less than a week, the MIMESIS project team had adapted and improved the concept, setting up a production line for connecting valves and having it approved by doctors. Behind this was Stéphane Cotin, director of MIMESIS. For a little over 20 years now, this renowned award-winning researcher (winner of the Inria - French Academy of Sciences - Dassault Systems Prize in 2018) has been breaking down boundaries between scientific research and medical practice.

In 1997, Cotin graduated with a PhD in computing from the University of Nice, the subject of his thesis was deformable anatomic models in real-time. At the time, research into medical simulation was still very much in its infancy, and the young researcher was one of the pioneers in this new world between computer science and medicine. After his impressive PhD, Stéphane Cotin had a choice: remain in academia and diversify his knowledge or take his research elsewhere and push it further.  In the end, he went with the second option.  Driven by “a desire for something more practical without immediately abandoning [his] research”, Stéphane Cotin moved to Cambridge where he joined a start-up made up of around half a dozen individuals working on a simulator for training interventional cardiologists. The company failed to establish itself, however, leaving this young biotech entrepreneur with an uncertain future. A meeting with a medical expert encouraged him to return to research and continue the adventure “in an exceptional environment” - more specifically, the east coast of the USA, between Harvard University and the labs at MIT.

“Medicine has changed more in the space of a few decades than it had in centuries.”

Stéphane Cotin has said that he often felt things weren’t progressing quickly enough, but he accepts that his wildest dreams as a young researcher have all come true, “or nearly all of them”. In his opinion, with the progress made in imaging, modelling and robotics, “medicine has changed more in the space of a few decades than it had in centuries”. While intra-operative assistance (robotic surgery, for example) is still being developed, both the simulators used to train doctors and medical imaging have become essential. Stéphane Cotin and his colleagues can be thought of as cartographers of this interface zone with medicine. They guide in real-time, predict and anticipate the actions of surgeons as they go about their work. Since the 1990s, Stéphane Cotin has had a passion for research that allows him to have an influence on medical procedures and to have a visible, tangible impact on patients’ health.

Indeed, it was this passion, allied to expertise in medical simulation and modelling, which convinced Professor Jacques Marescaux, a pioneer in remote and minimally-invasive surgery, to invite Stéphane Cotin to join Strasbourg University Hospital project. This was in the early 2010s, a few years after his return to France when he joined the Inria Lille - Nord Europe research centre. After eight years in Boston, Stéphane Cotin “started a new adventure.” One condition for him coming to Lille was the setting up of what has since become the SOFA platform (so named because it was dreamt up on a sofa). Inria supported him in the development of this vast library of open-source codes, which is used in both academia and in industry. SOFA is now a vital resource which remains free to access (with the exception of the most “strategically important” codes), helping to promote the work of Inria researchers and to build bridges with the private sector. It was with SOFA, its codes, its technology and the companions he had picked up from his adventures in Lille that Stéphane Cotin began his next chapter in Strasbourg.

In 2013, while importing Inria expertise into the MIMESIS project team at Strasbourg University Hospital, Stéphane Cotin launched InSimo, a start-up centred around medical simulation. It wasn’t long before the start-up was spotted by the American foundation HelpMeSee, which set them “a completely crazy challenge”: they were willing to provide them with substantial resources to produce a High fidelity simulator for training surgeons in how to perform cataract operations. The simulator was successfully produced in 2020 and the start-up has since turned to other projects. Stéphane Cotin is currently splitting his time between InSimo and MIMESIS, with which he has been working on HECTOR. This new project, developed in collaboration with Paul Brousse hospital in Paris, is designed to provide surgeons with augmented reality technology enabling them to view the internal anatomy of an organ during an operation. This research is in keeping with a partnership signed in 2019 between Inria and Strasbourg University Hospital, a centre of excellence in which Stéphane Cotin still has: “many exciting things to achieve.”