Date:
22 Jun. 2020
Changed on 23/06/2020
Patients who require ventilatory support are usually connected to ventilation systems (Continuous Positive Airway Pressure (CPAP)).
Faced with the lack of respiratory assistance equipment and the large number of patients affected by COVID 19, the MaskDecath project aimed to print in 3D an adapter (and if necessary a valve) to transform a Decathlon diving mask into a low-cost CPAP device that could be distributed quickly. 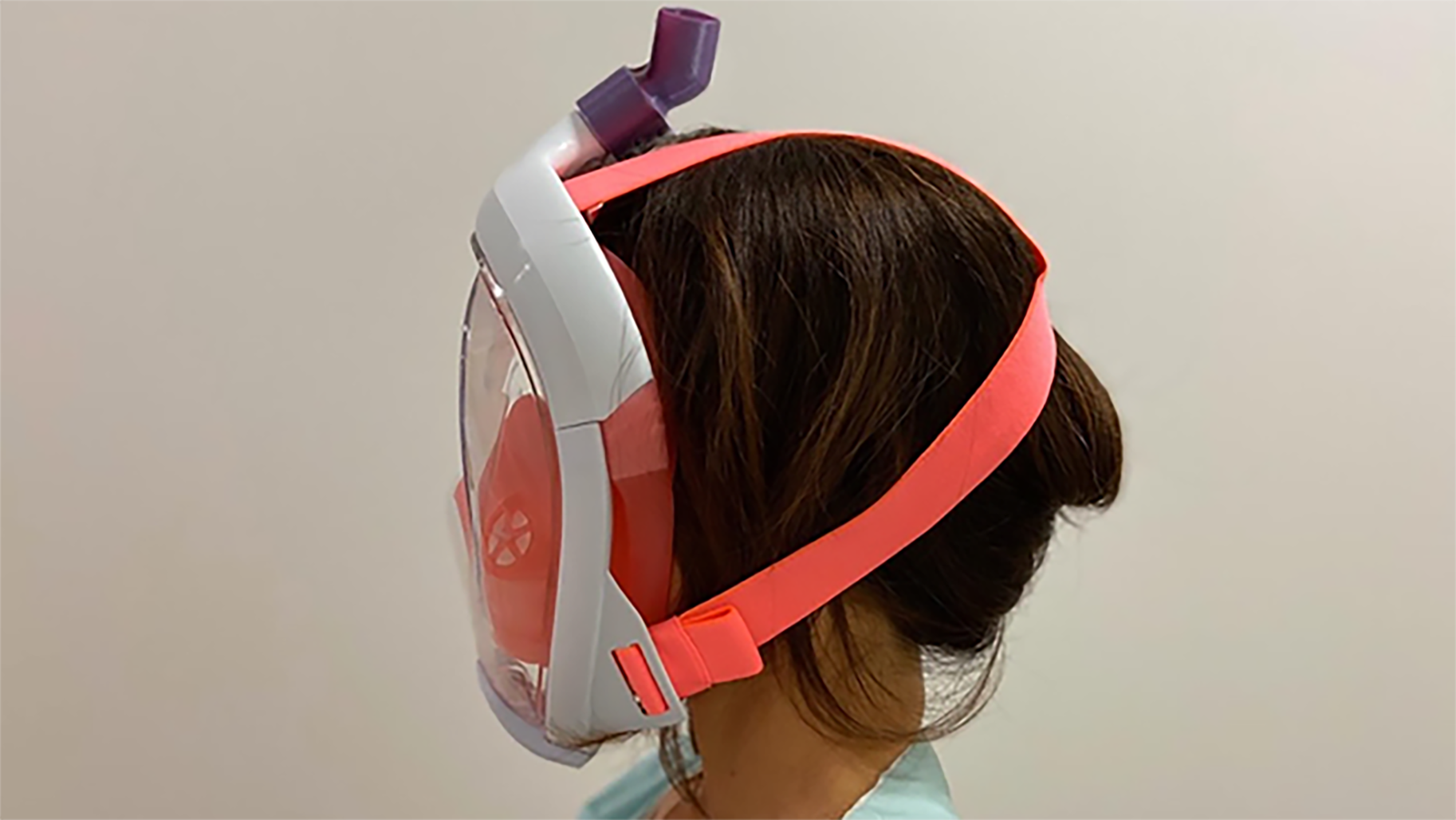 How was the project born?

This project started from a concrete need! At the beginning of the health crisis, the intensive care unit of the Strasbourg civil hospital was very quickly overwhelmed and its capacity was quickly saturated", explains Stéphane Cotin, Inria's project leader and head of the Mimesis team in Strasbourg. "There were no solutions to help patients who were not in critical condition. Indeed, those with the virus but without respiratory problems could stay at home, those who were seriously affected had to be incubated, and for another category of patients, less seriously affected but who nevertheless needed to be hospitalised, the hospital was short of ventilators. It was for these patients that a less complex rescue solution was developed to compensate for the lack of respiratory support systems.

How did the project develop? What are its objectives?

S. Cotin: The objective was to respond to a need in an emergency! To make these adapters, we were inspired by a similar Italian initiative, which consisted of adapting diving masks to connect them to breathing aid systems.

We optimized their design with the help of the University of Twente (Netherlands) and carried out numerous tests to make them more functional. Within a few days, many parts were printed with the on-board means available to our team and the Dutch team. Dr. Silvana Perretta, a surgeon at the civil hospital in Strasbourg, then approached Decathlon, who provided us with a hundred masks!

We then had to make sure that the masks were suitable for use on patients, and in particular that with our modifications the contaminated air exhaled by the patient was well filtered before being discharged outside. Once the tests had been validated on a dummy, and certified by the hospital's lung specialists, around thirty adapters were printed in the team, and used at the new civil hospital in Strasbourg. The rest of the modified masks were then sent, following their request, to Colmar and Mulhouse.

To increase the diffusion of this emergency solution, the team behind this project designed a website with an explanatory leaflet, in French and English, for healthcare professionals.

This project was developed in one week (from the starting point of the idea to shipping)! Demand then rapidly decreased (at least in France) as hospitals started to be supplied with medical equipment.

We continued to be solicited afterwards, but to meet the needs of healthcare personnel. And we also had a lot of exchanges with the MFX team in Nancy, which also developed a project to support healthcare staff during this crisis.

How did you work with your partners?

S. Cotin: It was an international working group, made up of experts from the B.E.S.T. Innovation programme led by Professor Silvana Perretta from the IHU in Strasbourg, which was inspired by the Italian concept developed by ISINNOVA.

The collaboration between the pneumology department of the New Civil Hospital (NHC) in Strasbourg and the working group, comprising the team from the University of Technical Medicine of Twente (Holland) of Professor Stefano Stramigioli, Stéphane Cotin and his team Inria Mimesis and John O'Dea, CEO of the Palliare company (Ireland), made it possible to improve and adapt the initial concept in record time.

Thanks to all these partners and the support of Decathlon, we were able to quickly set up a production line for the connection valves and validate the effectiveness of the mask with the pneumologists of the New Civil Hospital in Strasbourg.

In the face of the pandemic that has affected the whole world, it was important for us to help the health care workers to cope. The shortage of equipment quickly became global and it was imperative to find innovative alternatives. We have been offering training in the field of medical innovation for several years and over the years we have built up an international community of doctors, engineers and entrepreneurs within the B.E.S.T. network, of which Inria has been a long-standing member. This health crisis was an opportunity to create a strike force with Inria's contribution from a technical point of view and ours from a clinical point of view. On this project, developed in just four days, Inria showed incredible dynamism!