Date:
28 Jun. 2018
Publish on 29/01/2020
After Lille in 2014, Nancy in 2015, Rennes in 2016 and Sophia Antipolis in 2017, the Inria Bordeaux Research Centre is hosting the Inria Science Daysfrom 27 to 29 June, with the same aim: to unite the Inria communities around exciting research topics and illustrate the range of subjects, approaches and applications examined by the Institute in the digital sciences. 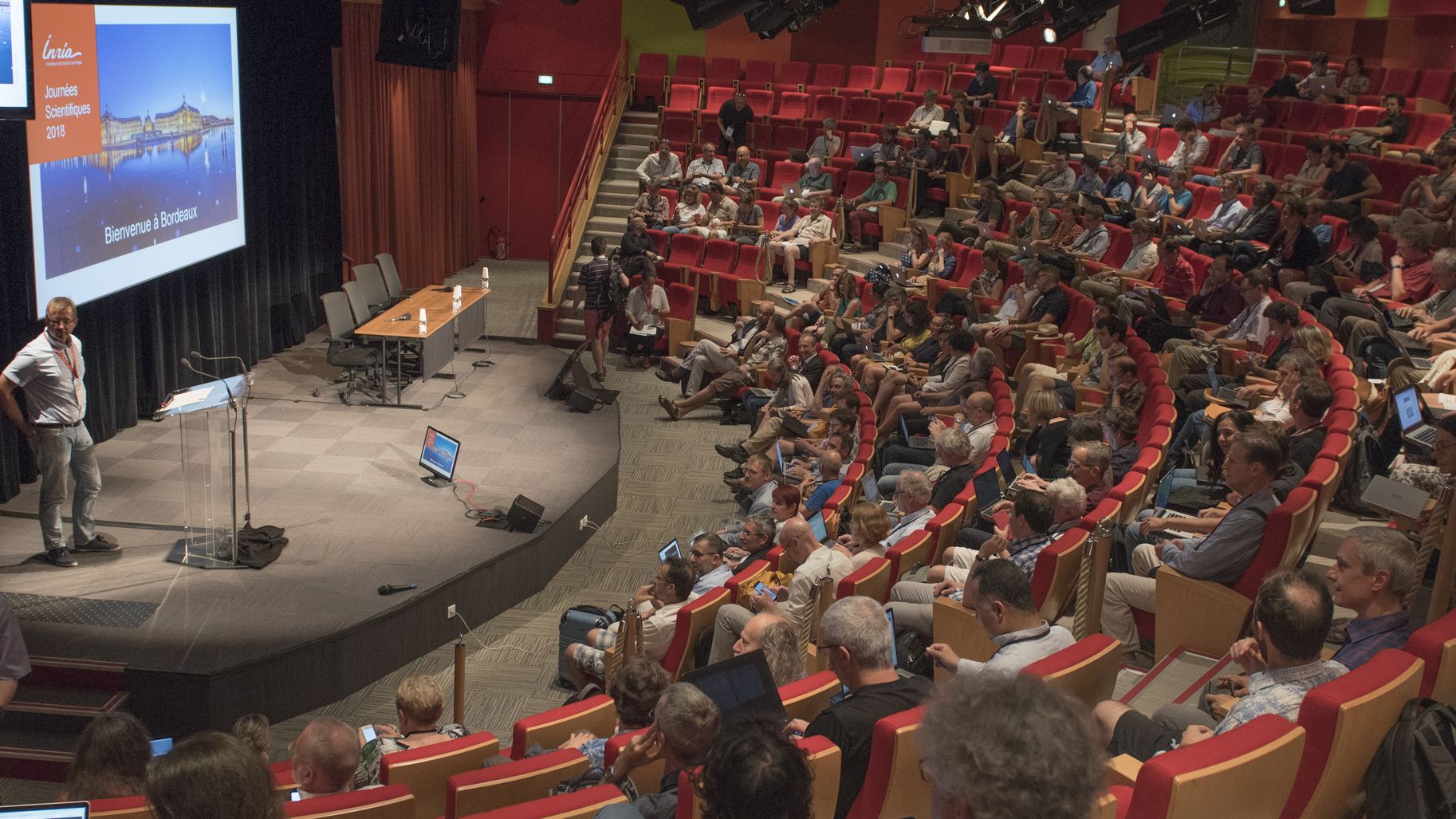 Just like every year, the Inria Science Daysare an opportunity to provide an overview of the fields of research and application in which the Institute's project teams are working. Health, blockchains, cybersecurity, privacy, climate, modelling… the presentations also reveal the indestructible link between research and society.

Wednesday 27 June: From the brain to blockchain

The first morning was devoted to the study of the brain through the digital sciences.

As an introduction, Jean-Gabriel Ganascia (UPMC) gave a presentation on “The ethics of computers and computational ethics”.

Other speakers included Stanley Durrleman, a specialist in neuroimaging data and a researcher in theAramis joint team (Inria/Brain and Spine Institute), presenting his work on numerical models of brain evolution, which won him an ERC Starting Grant in 2015. These numerical models have a broad range of applications, notably including the visualisation of the effects of a pathology on the brain, which helps clinicians establish theories regarding the biological mechanisms of such pathologies. By comparing a patient's data to the models developed, his team is introducing tools to assist diagnosis and prognosis for neurodegenerative diseases (Alzheimer's, Parkinson's, etc.).

In the same field of research, Maureen Clerc (ATHENA) spoke about her work during a session on “Variability in brain activity and adapted algorithms”.

Fabien Lotteis a researcher at the Inria Bordeaux Research Centre who works on brain-computer interfaces and modelling their learning process. Another recipient of an ERC Starting Grant in 2016, he has used this funding to open up this still-recent field of research to an aspect that had, surprisingly, been largely overlooked by the specialists until now:  the human factor. His highly innovative approach has made it possible to improve the use of interfaces within a broad range of applications, from assistance systems to video games.

In the digital world, a new technology is on its way to totally changing practices in several sectors of the economy: the blockchain. Still relatively unfamiliar to the general public, this “chain of blocks” is a storage system that enables an operation to be automated and authenticated, and its date and the identity of the parties concerned to be certified. It forms a global database that is secure and transparent, and able to operate without a central control body: it is therefore shared by its different users. Some specialist observers are already talking of a “design revolution”or a “tool that will revolutionise our lives”.

Daniel Augot, the leader of the GRACE project team, gave a presentation on his research into the use of blockchains in cryptology and coding. At the same session, Georges Gonthier, a researcher in the SPECFUNproject team who, since his thesis supervised by Gérard Berry, has been exploring the digital verification of mathematical theorems, opened the debate with a presentation entitled “Attack the blockchain”.

Air pollution, noise pollution, smart transport, the reduction of the impact of digital technology on regions… There are multiple climate and environmental issues that place research at the heart of public debate.

Vivien Mallet, a researcher in the CLIMEproject team, presented his research on models for forecasting urban pollution. His work notably led to the formation, in 2017, of a startup, Ambiciti, which provides revolutionary real-time analysis of atmospheric and noise pollution. The Ambicitiapp of the same name, also on offer from the startup, has already been deployed in several cities in Europe and United States. Capable of showing the levels of atmospheric and noise pollution street by street, in real time, and suggesting the healthiest itinerary, the app provides a solution to help urban citizens live better in their city.

Of particular note among the presentations was that of Jocelyne Erhel (Fulminance project team), last year's winner of the first prize in the international competition Mathematics of Planet Earth (MPT) for her work on geochemical models for reactive transport, while Emmanuel Prados (STEEP) presented sociotechnical alternatives that would make it possible to improve resilience and reduce the regional environmental impact in a society increasingly beset by social, economic, political and cultural crises.

The session closed with a keynote address by Françoise Berthoud, the director of the EcoInfogroup, on the subject of “Could the environment make digital technology obsolete?”  This presentation provided an update on the ecological footprint of digital technology due to the consumption of energy and raw materials (chiefly metals), on the potential of recycling and on the problem of rebound effects, which tend to eliminate gains in efficiency due to exponential growth in consumption. Françoise Berthoud concluded by demonstrating that it is vital to make a resolute shift towards ecodesign if we wish to see sustainable digital technology in the future.

To round off the morning of 28 June, five Inria modelling researchers are presenting their work:

The fact that ever-growing quantities of personal data are being collected by a wide range of private and public entities constitutes a serious threat to both individual rights (privacy violations, discrimination, etc.) and collective rights (manipulation, intimidation, etc.) and, in the long run, to democracy (the dystopias of Orwell or Huxley).

However, data are also collected for perfectly laudable aims. The issue is therefore how to provide the means to analyse the risks and benefits of data processing, as well as tools to reconcile (as far as possible) contradictory objectives and restore more balanced relationships between citizens, on one hand, and data collectors, on the other.

From the cloud to connected objects, covering cryptology too, the last two sessions on 28 June bring together researchers from the following project teams: Privatics, Petrus, Spirals, Indes, Dante, Caramba, Secret, Pesto and Cedar.

These three days of scientific discovery are ending on the subject of robotics, notably with an introduction to “soft robots” from the Defrostproject team, which specialises in deformable robotics, and the Crowdbot Project by theRainbowproject team.

Will we soon be seeing service robots of every kind in public places, going about their daily business alongside real, flesh-and-blood humans? A European consortium coordinated by Inria and financed by the Horizon 2020 – ICTprogramme, Crowdbot aims to allow these machines to navigate in human crowds without bumps and without risks – to either themselves or us. As Julien Pettré, the project coordinator, explains, this research places great emphasis on ethics.

Educational robotics, among other things, also features in this final session, thanks to the presence of Didier Roy, a member of the Flowersproject team.