Date:
16 Sep. 2022
Changed on 25/10/2022
Through her participation in the project Telemovtop, Serena Ivaldi, a researcher in Robotics within the Larsen project team, a joint undertaking involving Inria and Loria, is aiming to live out her team’s motto: taking robots out of the lab. She is contributing towards improving a robot developed by Iso-Top, a company specialising in the removal of asbestos from industrial buildings. 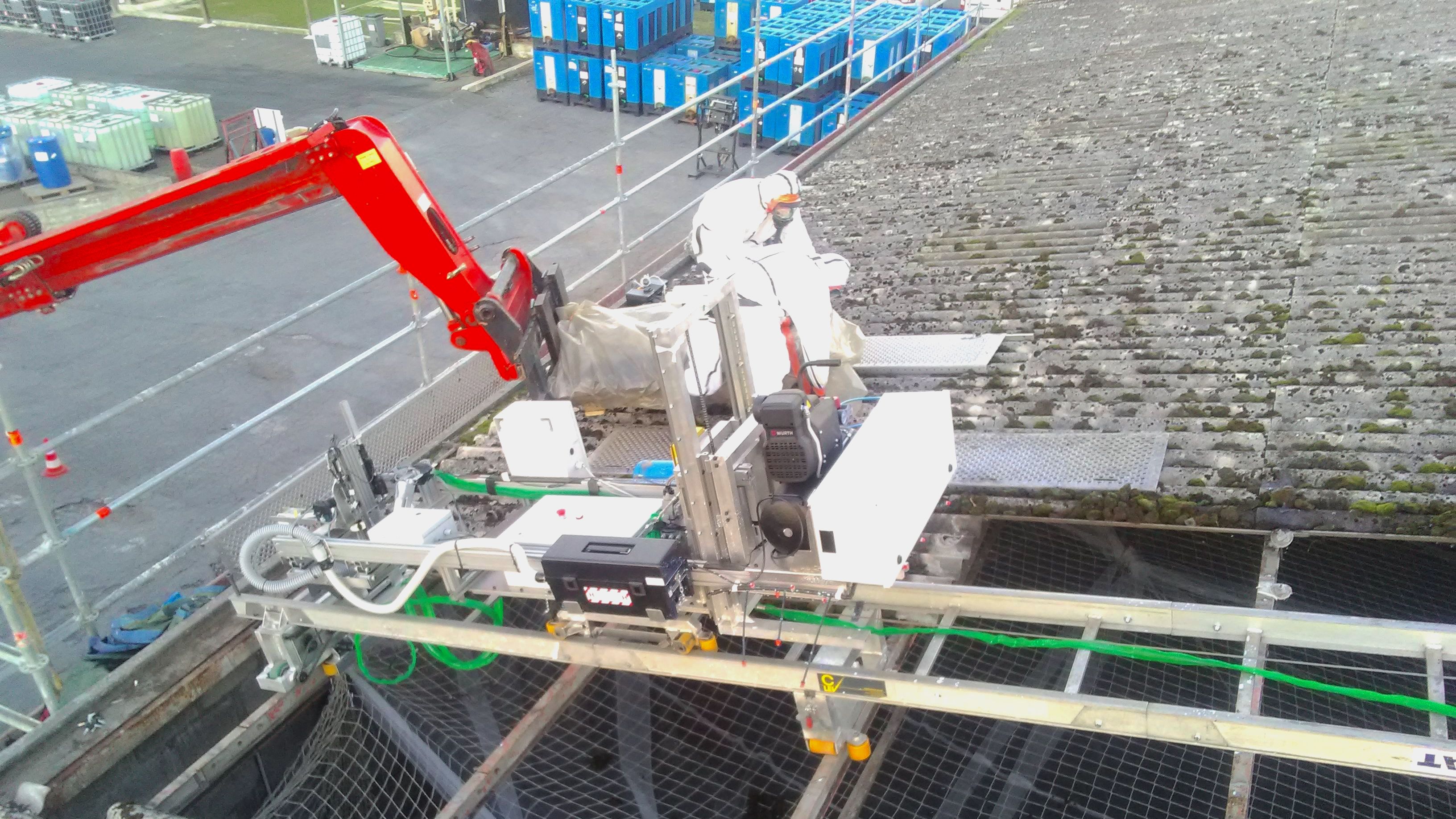 A researcher at the Inria Nancy - Grand Est research centre, Serena Ivaldi has a passion for robotics, which she views as a vast field for scientific exploration geared towards practical applications. Alongside her colleagues from Larsen, the focus of her research is on collaboration between robots and humans, a subject which draws as much on theoretical concepts as it does on practical applications.

“As researchers, we work primarily on robot prototypes, developing tools that will enable them to interact with humans”, explains Serena Ivaldi. “This might involve improving how their movements are controlled or sequenced in order to adapt them to diverse environments or increasingly complex tasks, or fine-tuning their capacity to interact with humans. For this we draw on a range of different disciplines, from control theory and automation to optimisation and machine learning.”

But this research extends beyond the purely scientific: “Our goal is also to ‘take our robots out of the lab’: to bring our developments face-to-face with real-life applications in response to needs in sectors such as industry and medicine”, explains the researcher.

With Telemovtop, the aim of which is to develop a smart robot capable of removing asbestos from the roofs of buildings, Serena Ivaldi has very much been moving in this direction. This is a subject with a whole host of scientific challenges relating to occupational health and ecology. Jointly devised by Iso-Top and Larsen, this initiative received support from the Grand Est region as part of the “Digital Economy” call for projects in autumn 2019.

What field does Iso-Top operate in? “We are a family company from the Reims region which operates in the construction sector”, explains Stanislas De Benoist, the company’s director. “We carry out work for major clients in industry, public services and local authorities, on jobs involving the removal of asbestos from buildings, roofs, cladding, and so on.” Not only does the need to respect a strict protocol governing how asbestos is to be treated render such operations highly complex, but they are also difficult for the experts tasked with carrying them out, who have to wear fully airtight protective clothing and work in dangerous environments (at height, on slopes, etc.).

An innovative company in its sector

“Ever since the company was founded, we have always been open to innovation and technology when it comes to tackling environmental challenges”, explains Stanislas de Benoist, Technical Manager at Iso-Top. “We are constantly on the lookout for ways of improving how we operate, particularly when it comes to maximising safety. Having considered the potential benefits of robotics for the most critical tasks involved in asbestos removal, we set out to become a real player in this field.”

In 2018 Iso-Top was successful in a first call for projects from the French Ministry of Ecology for designing a robot as part of a collaboration with Arts et Métiers (ENSAM Metz). Tested first in the lab and then under real-life conditions, the robot system was found to be fully up to the task: through the use of a remote control, it could be moved around on roofs to remove fibre cement slates after first neutralising the fastenings holding them in place. Replacing humans for this task reduces risk for operators, and more broadly for other users and those living in the vicinity of treated buildings, during asbestos removal.

A wide variety of scientific problems

With momentum on its side, the company pressed on. “After this initial test, which proved highly successful, we wanted to take things further by perfecting the control system, enabling us to operate the robot remotely, without having to be nearby”, explains Stanislas de Benoist. “But there were a number of technical challenges relating to incorporating a more flexible automatic control system that we were unable to tackle on our own, given the lack of research resources at our disposal.”

With the funding from the Grand Est region to finance Telemovtop helping to pay for a research engineer to work for 18 months, the partnership with Inria was to prove decisive for Iso-Top. “We began by focusing on optimising and controlling the movements of the robot, factoring in the specificities of asbestos removal”, explains Serena Ivaldi. “The robot had to be able to grip and lift slates, while turning and moving around on sloped roofs, without sliding or knocking into anything, and without ever dropping these heavy asbestos slates. The expected performance levels were really high!”

The next stage for the team from Inria involved working on the ergonomics of the system, designed to be operated remotely, drawing on information about the environment. From configuring instructions and switches to controllers for the robot's speed or positioning, the scientists left nothing to chance, and even developed an innovation: a digital twin.

Serena Ivaldi explains the benefits of this: “A digital twin is a simulated model of the robot system, incorporating a model of its mechanical behaviour and data from sensors, and can be used to simulate and visualise the status of the robot in real-time. In the first place, this lets you better sequence the robot’s movements, by adapting them to its environment or the diversity of tasks to be carried out in relation to asbestos removal. But it also gives you a comprehensive view of the system in situ while controlling the robot: you can see it on the roof, for instance, and access additional information on top of the information transmitted by the robot’s in-built cameras, which give a partial view of the operations in progress.”

An innovation tested in real-life conditions

With Telemovtop, the researcher was able to develop a digital twin of the Isotop robot, testing it in near-real conditions in order to assist operators. “The project is highly motivating, from both a theoretical and a practical perspective. Through this collaboration with Iso-Top, we were able to explore scientific subjects geared towards ensuring the system's performance: stabilising the gripping of heavy objects, securing the robot's rotations when transporting objects, preventing collisions, and so on.”

The project is now set to enter a new phase, with a second version of the robot - incorporating contributions from Inria and the ENSAM - set to be built between now and early 2023. Iso-Top has already identified practical applications, and is seeking funding to finalise this process. The company already has one success under its belt, something Stanislas de Benoist is particularly proud of: “There is a lot of talk about robotics in the construction sector, but there are still few practical applications. Through this project we were able to demonstrate that innovations devised in labs, like those from Inria, can quickly be transformed into operational solutions.” From the lab to the worksite, the distance is becoming ever smaller.