Date:
23 Apr. 2020
Changed on 05/05/2020
As a researcher at Inria's centre in Nancy, Serena Ivaldi’s work involves applying methods developed in machine learning to cobotics, an innovative research theme concerning the factory of the future. Ivaldi has also taken part in a range of collaborative projects within Europe. We met up with this talented scientist, who has set a shining example through her promising career path to date. 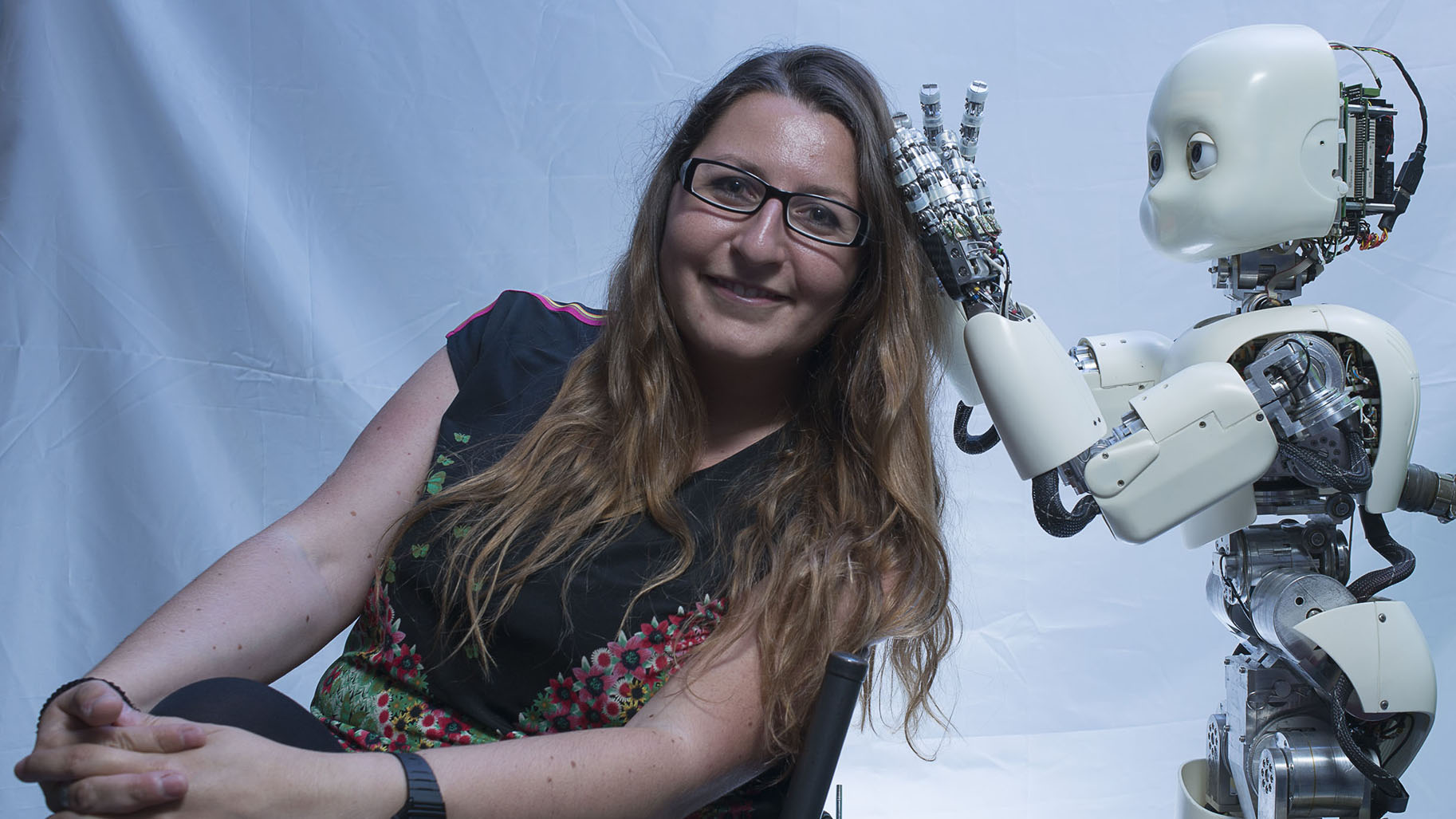 Was it her passion for science fiction, and the escape into imagination that it provided her during childhood, that guided Serena Ivaldi towards a career in science and robotics? “It certainly played a part, but it wasn’t the only factor”, explains Ivaldi, who joined Inria Nancy in 2015 subsequent to her research experience overseas. “More than anything, it has been the people I've met and the discussions I’ve had with my colleagues, particularly during my postdocs in France and in Germany, that have influenced my view of scientific research and stimulated my interest in robotics and machine learning.”

As far as Serena Ivaldi is concerned, research in these fields becomes meaningful when it is able to contribute towards improving people’s daily lives. As a researcher in the LARSEN[i] team managed by François Charpillet, within which she has also been involved in strategic decision-making [OR] where she also contributes to the team’s strategic decision-making, Ivaldi is responsible for humanoid robotics with a focus on cobotics. “The bulk of our projects are geared towards developing robotic systems designed to work with humans and to help them with tasks that might otherwise be dangerous or difficult, particularly in the industrial sector”.

Serena Ivaldi is involved in H2020 “AnDy”, a four-year EU project that was launched in 2017 with a budget in the order of four million euros. “We are looking to find ways of adapting robot controls to human gestures and improving cooperation between humans and robots. Part of the work we do concerns machines and their capacity to predict “gestural intention”. Our aim is to develop control algorithms based on artificial intelligence, enabling robots to learn gestures not only through physical contact with humans by using data taken from wearable sensors.”

Nine partners from six countries (Germany, Denmark, France, Italy, the Netherlands and Slovenia) form the consortium for this project, which brings together the skills of fifty or so researchers and engineers in the fields of robotics and automation. The long-term goal of their research is to help improve workstation ergonomics and to make complicated tasks safer (by assessing, for example, the work carried out by an operator, or by detecting risks and making workers aware of any potential hazards, including the risk of adopting an inappropriate posture during lifting tasks).

Serena is also involved in HEAP, a three-year EU project (2019-2022) with a smaller team (six contributors from five different establishments: the University of Lincoln in the UK, the University of Vienna in Austria, the Italian Institute of Technology, the Idiap research institute in Switzerland and Inria). “We are looking to develop systems that are capable of sorting piles of miscellaneous objects, taking inspiration from waste sorting. Items come in a range of shapes, sizes and types (malleable, fragile, metal, plastic, broken, etc.). In order to teach robots how to handle these objects, we are working on developing input algorithms incorporating human expertise.”

It is not merely by chance that Serena Ivaldi has been involved in these cooperative EU projects. She is also involved in other collaborative projects, “Flying coworker” (funded by the ANR***), and “C-Shift” (funded by Lorraine University of Excellence), both set up to tackle human-robot interactions. After graduating from the University of Genoa with a Master in automation and robotics, which she followed up with a PhD in robotics and automation from the Italian Institute of Technology, Ivaldi left her native Italy in 2011. “Working within a team dealing exclusively in humanoid robotics, my job was to carry out online estimation of the dynamics of robots using onboard sensors. I then worked on methods for control and mechanical processing in order to give the robots “optimal” movement: movement that uses up little energy and which more closely resembles that of humans. This work was validated on the humanoid robot iCub.”

It was then that she moved to France (Pierre and Marie Curie University in Paris****) before subsequently moving to Germany (the University of Darmstadt) for three years, pursuing her research through postdocs and successfully contributing towards her first EU project “CoDyCo”, which she was partly responsible for developing. “We combined techniques from machine learning and control, which we then applied to the iCub robot. Picking an object up from the ground, for example, involves the use of the whole body: not just the hand, but also the arm, the torso, the legs, etc. We refer to this as ‘whole-body movement’ in robots, and our research contributed towards these types of applications.”

Serena Ivaldi is now drawing on this experience at Inria, working to make robotic systems more durable and to make their interactions with humans more natural. The robots from the sci-fi books she used to love so much are now becoming reality, and the researcher is proud of the contribution she is making to their development. “The end goal is to help humans in their daily lives and at work, and to replace them in dangerous situations.”

[i] LARSEN (Lifelong autonomy and interaction skills for robots in a sensing environment) is a team that is a joint undertaking of Inria Nancy - Grand-Est and LORIA (the Lorraine laboratory for research into IT and its applications).