Date:
16 Apr. 2020
Changed on 05/05/2020
Born from a collaboration between Palais de la découverte and the Sierra project team at Inria Paris, the “illustrator's apprentice” is designed to explain the ability and limits of artificial intelligence to the general public. How does it do so? By using drawing recognition, a simple but effective tool for communicating to children and adults. This scientific outreach work is also beneficial for the researchers, who are able to take their research beyond the walls of the laboratory.

It all began in Palais de la découverte. The famous Paris museum decided to dedicate a permanent exhibition to computer science and open a new room for digital and computer sciences in which artificial intelligence (AI) would, inevitably, have its place. But how should it be presented? To resolve the issue, the exhibition organisers contacted the Sierra project team at Inria Paris, who are renowned in the field, in late 2016. “Finding the right activity to present AI wasn’t easy”, remembers Francis Bach, head of Sierra.

It wasn’t just a matter of showing the result of what AI could do, but also explaining how, why and what scientific challenges lay behind it!

After much discussion between the researchers and scientific outreach professionals, an idea began to take shape: base the solution on image processing. “It is simple and visual and therefore suitable for children from the age of 7, and drawing recognition by algorithms was starting to work well at that point”, continues Francis Bach. The next step was to create the scenario that would enable children to participate. Once again, the combined expertise of Palais de la découverte and Inria proved invaluable.

The final system, chosen after various trials and adjustments, uses a tablet that the child can draw on. They first “teach” the machine to recognise the subject of different drawings by sliding labels next to each one, such as House, Snail, Car, etc. Next comes the test phase, where the child draws and the machine recognises the drawing. “One of our students, Jean-Baptiste Alayrac, wrote the algorithm in the space of a week and did a technically fantastic job,” emphasises the head of Sierra. “One of the service providers of the Palais de la découverte produced the excellent interface it uses”.

By the end of 2017, the illustrator's apprentice was born!

Training artificial intelligence, everyone at their own level 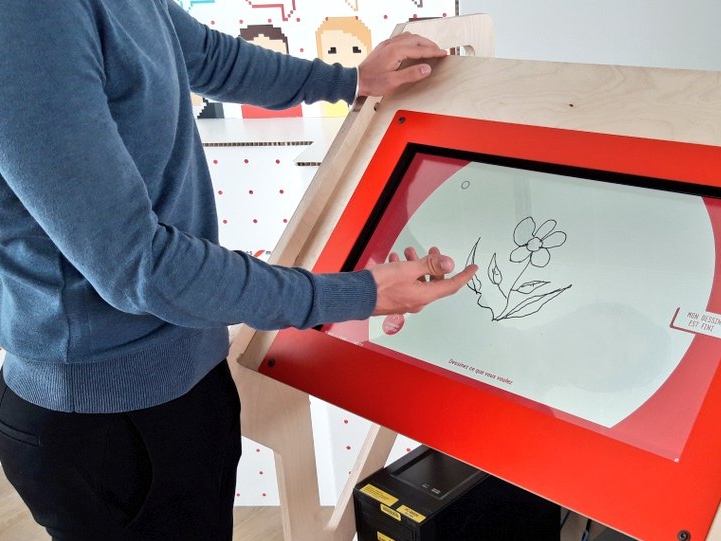 In March 2018, the new room in Palais de la découverte was inaugurated and the illustrator’s apprentice with it... And it was a big success. This positive result inspired Inria to duplicate the demonstration for external use elsewhere during events such as the Fête de la Science and the Salon Culture et Jeux Mathématiques. Francis Bach and the students and PhD students in his team took the opportunity to talk about AI outside of Inria.

explains Raphaël Berthier, a PhD student in the Sierra project team who has presented the illustrator’s apprentice on several occasions. “Depending on the audience, we can also try and reveal to people the biases introduced during the learning process, or critical errors”. For example, the machine may recognise the drawing of a house, but not one of a house in the rain: it identifies this illustration in a completely random way. “It’s not just children who try to catch the machine out!” laughs Raphaël Berthier. While the public’s reaction is one of amazement faced with the machine’s ability, the same is true of the researchers when considering the interaction generated by the scientific outreach.

“It’s always an interesting experience: the children are full of questions and we can provide different degrees of response to suit their level”, recalls Raphaël Berthier. “It’s also a way of getting a feel for public opinion, seeing how people react to the subject and trying to rectify fears and fantasies in connection with AI. It’s also stimulating for us, because it gets us out of the office to share a little knowledge”. This sense of pride is shared by Francis Bach: “I was lucky enough to be able to show my own children a sample of what I work on!”

Besides being enjoyable, outreach is also an opportunity for researchers to improve their communication and teaching skills.

Adapting to a different audience and interacting with the children and their parents to explain a complex subject without distorting reality requires a different approach. It’s something I very much enjoyed and I see it reflected in my teaching, explains Francis Bach.

The project also allowed us to work with passionate people from the Palais de la découverte, and if I was offered a new project, I would probably say yes”. It is very good “training in communication"” adds the doctoral student from Sierra. The other advantage that comes out of a project like this is that it allows participants to become more involved in the Inria ecosystem. “Thanks to this project, I learned to work with the communication and administrative departments and I found it interesting taking part in the life of my research centre”. Francis Bach and Raphaël Berthier are keen to pursue the adventure.

In scientific outreach, you get back much more energy that you put in, concludes the doctoral student. These sorts of projects boost our motivation and remind us that our research is part of a much bigger picture.