Date:
05 Jul. 2019
Changed on 30/10/2019
Inria and the SME Touti Terre have been working together since 2015 to develop Toutilo, a multipurpose crop-straddling cobot. The aim? To bring digital and other new technologies into the world of market gardening. And to make the work less arduous whilst at the same time increasing productivity. Mission partially accomplished already, and the research continues so that Toutilo can help farmers carry out - and plan - their daily tasks. 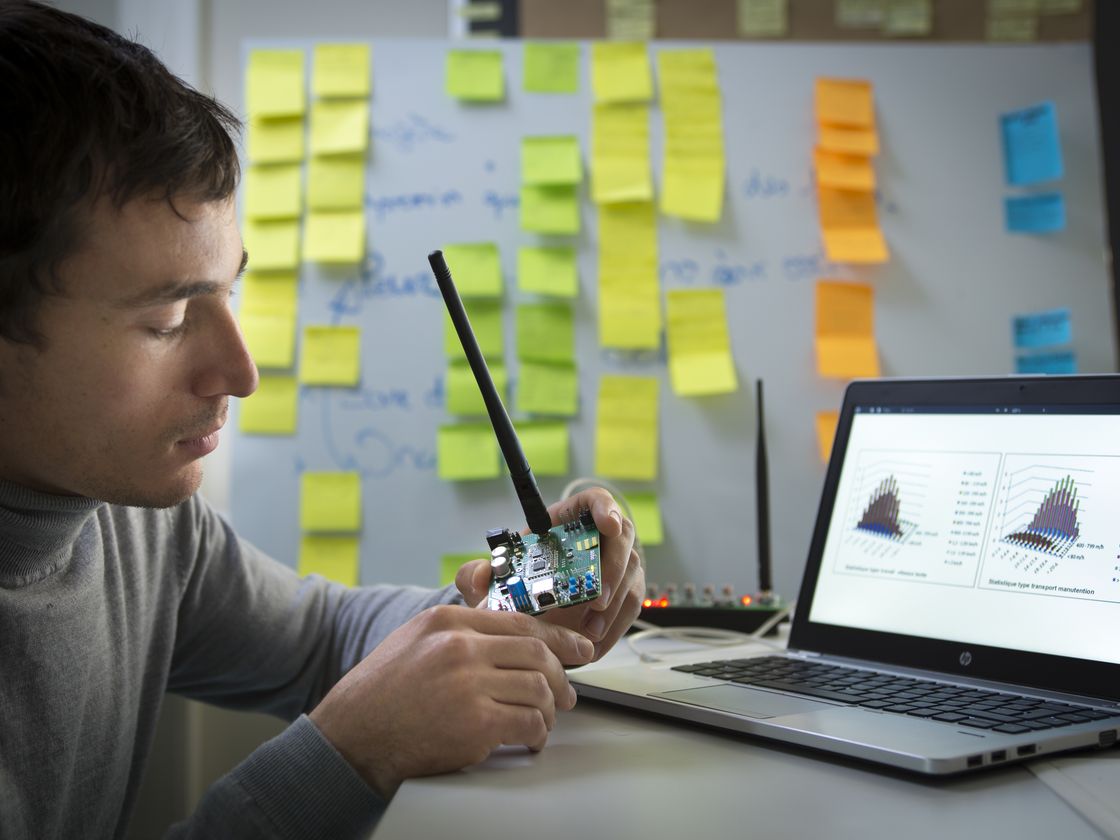 It all started as a family project. A market gardening sister, another who is an industrial designer, a father who works in electronics… these are the three people behind the creation of this SME Touti Terre in 2014. "The aim was to provide my sister with a solution to make farm work a bit easier," says Flore Lacrouts-Cazenave, Chair of Touti Terre, "So we designed a cobot: a robot that collaborates with humans." This cobot, named Toutilo, straddles the rows of plants and enables the market gardener to plant, weed and harvest in an ergonomic position, for example lying on the cobot. It can also be used to carry heavy loads. "First of all, we developed a simple remote control which enables Toutilo to be used manually," continues Flore Lacrouts-Cazenave, "But after meeting with Inria, we decided to try and improve the human-machine interaction and therefore the development of the robotic part."

Indeed in 2015, Touti Terre was taken on board by the Grenoble Alpes SATT (technology transfer accelerator company), Linksium, of which Inria is a member. "At the time, Touti Terre only had a mechanical prototype built by the members of the small firm," recalls Philippe Broun, head of the Transfer, Innovation and Partnership department at the Grenoble Rhône-Alpes Inria centre, "But the firm's designers already had the idea in mind of integrating digital technology bricks, artificial intelligence modules and a data management platform. That's why we saw potential in the project."

As Inria's aim is precisely to encourage the emergence of innovative digital projects to meet societal challenges, a first partnership with Touti Terre was soon in place. Thanks to the Inria Hub programme, Inria was able to recruit an engineer, who at the time was attached to the Chroma team, to work on the machine's laser guidance system. The research came to a successful conclusion, a patent was filed… but the collaboration between the SME and Inria was only just beginning. "We wanted to go on working together because there was such a positive spirit of partnership, the innovative potential seemed high to us it and because new technologies for agriculture, digital technologies in particular, is an area that is booming at the moment," explains Philippe Broun. A second project was submitted to Inria Hub, this time for a three-year period in the form of an Inria Innovation Lab programme. This gave rise to a joint Touti Terre/Inria lab, known as Toutirobo 2.

The Inria Pervasive Interaction project team and the Equipex Amiqual4Home have taken over from Chroma within the latter. And so a small group of about ten people are working together and moving forward with different technology bricks. First with Toutilo's autonomous movement from point A to point B, then in a more sophisticated way.

Next, data collection and retrieval.

The goal is to provide a digital tool that is integrated into the vehicle and which allows data to be collected in the field that can then be used to facilitate the farmer's work,

explains Stanislaw Borkowski, the engineer in charge of the Equipex Amiqual4Home Innovation (and rapid prototyping) Factory, "Algorithms using these data may make suggestions, for example, or give advice on how to manage the farm or reorganise tasks that have already been planned."

Finally, multimodal interaction, i.e. communication with the machine, most notably by voice command but also using audio feedback (the machine emits sounds to indicate that it has understood, for example). "Using the remote control, we can guide the vehicle from the harvesting area to the place of storage. But it's a laborious process. Whereas if we combine autonomous movement with mapping of the farm and voice recognition, it becomes much simpler," explains the engineer.

The research has already produced results and the camera guidance system is ready. But as the Toutirobo 2 project is due to end this summer, Inria and Touti Terre have decided to move up a gear and have answered a call for projects put out by the Rhône-Alpes regional authority. The aim? To pursue their collaboration for at least another three years and to complete the research on data collection and the user interface.

In the meantime, Toutilo has already been on sale since 2017 and the machines sold (about fifty so far) can be upgraded in line with the advances made by Inria and the SME. Farmers can therefore choose the software bricks they wish to install. "From the outset, our approach has been a user-centred one and that is what has led our research," emphasises Flore Lacrouts-Cazenave, "And the upshot is that Toutilo makes farmers' work less arduous and saves them time. All of which goes to make them more productive!"