Date :
02 Apr. 2020
Changed on 02/04/2020
Prior to forming the MFX project team, a pioneer in 3D printing, Sylvain Lefebvre spent a significant amount of time studying the representation of texture in image synthesis. In 2012, he was awarded a Starting Grant within the context of the ERC call for proposals for his project ShapeForge, which dealt with the modelling of three dimensional objects. He then created IceSL, an innovative software program enabling end-to-end control over 3D printing, which now employs the results of the research carried out by the MFX project team. 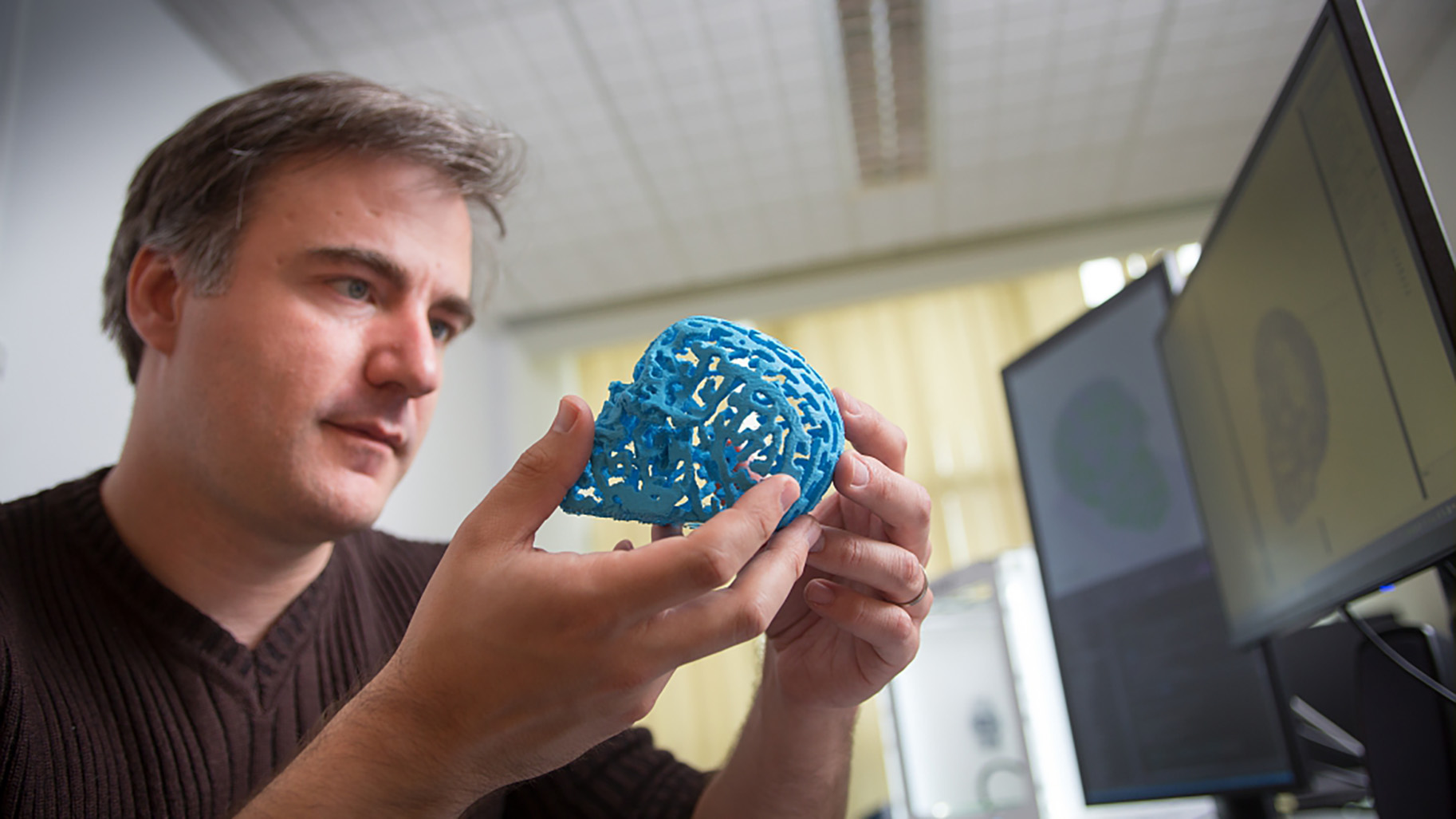 “Inria is a great place for carrying out research, for laying groundwork and for experimenting, particularly when it comes to areas that companies might find difficult to explore given the high risk of failure”, explains Sylvain Lefebvre, 41, head of the MFX (Matter from Graphics) project team, a joint undertaking involving Inria Nancy Grand-Est and Loria. The son of a milling machine operator, from a young age Lefebvre learned how to use a computer to create virtually what he was unable to create in real life, given the dangerous machinery that would have been required.

After developing a keen interest in image synthesis, a subject now very much on the rise thanks to breakthroughs in special effects and video games, he studied for a Master’s degree in computer graphics at Grenoble-Alpes University, before spending a number of years carrying out research in this field. Gradually, however, he made his way back to the real world: “I wanted to be able to take images off the screen in order to create real, tangible objects using shapes produced by our algorithms - 3D printing has made this possible.”

After starting out in programming in 1983, before turning to image synthesis in 1993, Lefebvre's academic adventure began at Inria Grenoble back in 2001, where he joined the IMAGIS project team as a PhD student. With Fabrice Neyret as his supervisor, Lefebvre successfully studied “problems relating to texture in image synthesis”, work that involved creating, without painting by hand, fine details on the surfaces of objects. He then left for a year and a half to study for a postdoc across the pond at Microsoft Research. “At one conference I was fortunate enough to meet Hugues Hoppe, a legend in computer graphics. After my PhD, I was given the opportunity to join Microsoft and to work with him in a really amazing environment alongside researchers who had been instrumental in the birth of our field. IT, and image synthesis in particular, was still a relatively new subject area at the time, and it was incredible getting the chance to speak to researchers who had invented the fundamentals of our discipline. I didn't really have to travel all that far either, seeing as a number of my colleagues were French.”

Returning to France in 2006, Sylvain Lefebvre joined REVES at Inria Sophia-Antipolis (now GRAPHDECO), where he continued his work on developing algorithms for synthesising textures automatically. What made this special, was that “the processing was designed to be extremely quick, using massively parallel processors[1] (GPU), which are still used today to enable users to change parameters interactively on large images.  In the context of a video game, this technology also makes it possible to store in the memory part of the virtual representation of the world being explored, with calculations made as the player moves through the environment.”

2009 was a pivotal year for Sylvain Lefebvre: It was then that he moved to Nancy to join the ALICE team, where he gradually began to move towards a subject area which, at first glance, seems quite different from his area of expertise: geometrical modelling. We say at first glance because, in reality, “the line is really quite blurred between geometry and texture, or between structure and details”: the technology used to reproduce textiles, for example, could also be used to reproduce complex geometrical details.

The MFX team came about through a willingness to strengthen the bonds between computer graphics, 3D printing and the semi-automatic generation of shapes and details. In 2018, Sylvain Lefebvre set up the team alongside three of his colleagues: Samuel Hornus, Jonàs Martinez and Cédric Zanni. “Over the past few years, we have seen a process of democratisation in the world of 3D printers. From our perspective, these are tools comparable to screens but which can be used to manufacture objects, and to a level of complexity that was previously impossible. This is opening up amazing new avenues for research, especially given the way in which “details and textures”, once in the real world, modify the physical properties of an object, in particular its flexibility, its porosity, its weight, its balance and how coarse it is.”

This approach formed the basis for the Shapeforge project, launched by Sylvain Lefebvre in 2012, and which was funded in the context of the highly competitive EU call for proposals ERC 2012: “We decided to base our project on methods previously used in designing films or video games in order to develop new technologies that could be used for 3D printing or additive manufacturing.” While this was happening, Lefebvre also launched the development ofIceSL, a software program for modelling and slicing (an operation that involves supplying information on the slices to be manufactured) in 3D printing, which was covered in a vast array of open access publications. Manufacturers were quick to show an interest, as were makers – i.e. enthusiasts –: the community version has been downloaded more than 50,000 times to date, with several thousand networks processed using the online version.

So, was that the end of the line? No. Sylvain Lefebvre and his team are now studying other technologies capable of modelling and 3D-printing ever more complex shapes, with surprising properties, using increasingly quick algorithms in order to enable companies to industrialise the additive manufacturing process for parts as sophisticated and as varied as medical prosthetics, sporting equipment and parts for use in the aerospace industry.

[1]    The use of a large number of processors to carry out a set of calculations coordinated in parallel, i.e. simultaneously.