Mathematical modeling for the physical sciences

A new tool for tracing the origins of the universe

Date:
15 Jun. 2022
Changed on 27/06/2022
Bruno Lévy, Director of the Inria Nancy - Grand Est Centre, Roya Mohayaee, CNRS researcher at the Paris Institute of Astrophysics (Sorbonne University - CNRS) and Sebastian von Hausegger, researcher at the University of Oxford, have recently published a noteworthy article in Physical Review Letters. Their work - at the crossroads between mathematics, computer science and cosmology - focuses on a new mathematical method for turning back time using a three-dimensional map of the cosmos. Roya Mohayaee and Bruno Lévy explain the specifics. 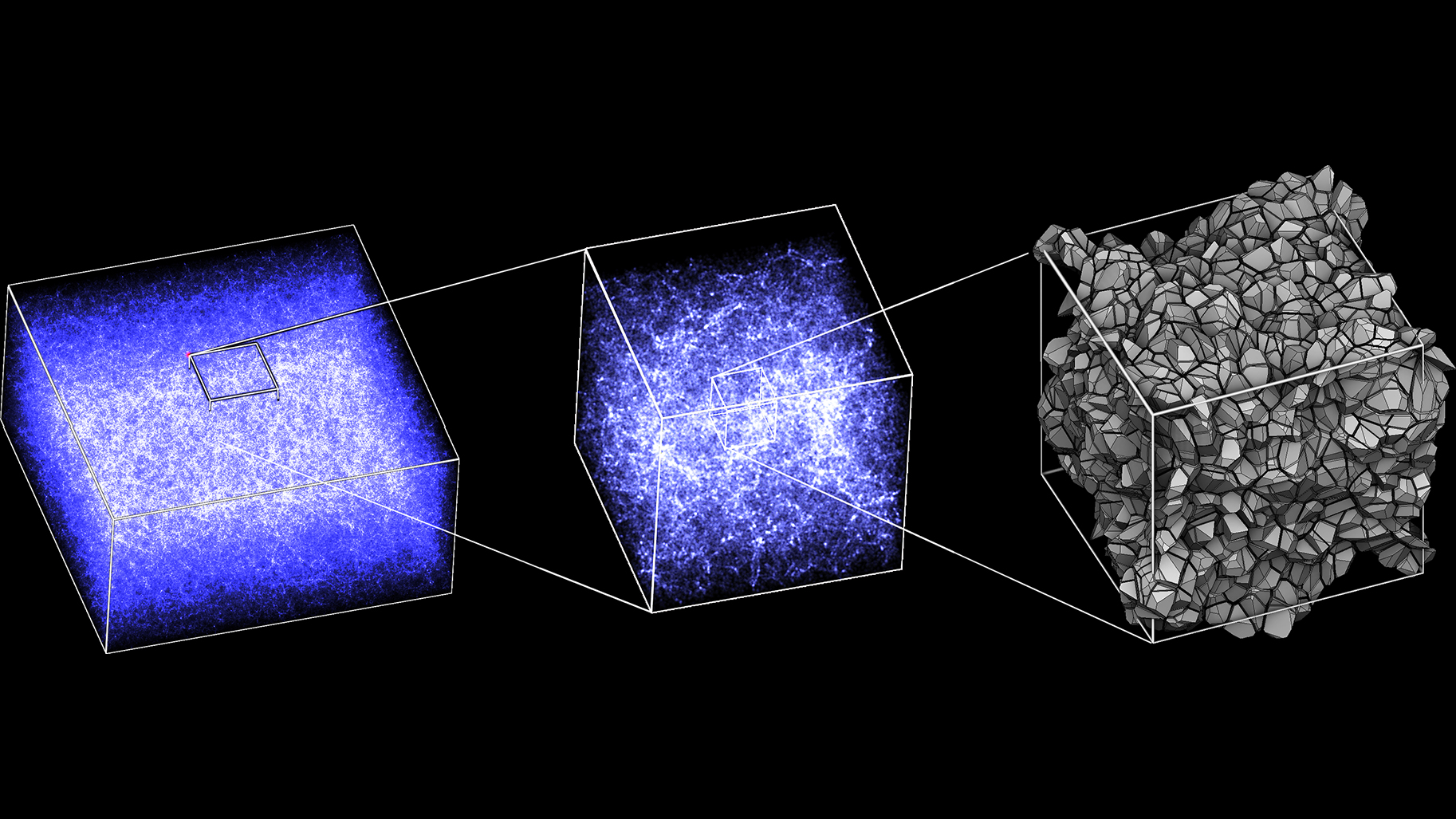 What are the characteristics of the tool you have developed?

Bruno Lévy: Simply put, our tool is a “mathematical time machine”. It allows us to reconstruct the movements of galaxies, in reverse using a 3D map of the cosmos, enabling us to see what the universe looked like billions of years ago. We have designed algorithms that allow us turn back time right to the origins of the universe, the Big Bang, 13.7 billion years ago.

Roya Mohayaee: Our tool is based on a mathematical theory that we have both been interested in for over a decade, called optimal transport theory. This currently very active field of mathematics was started by Gaspard Monge before the French Revolution and is the focus of French mathematicians such as Yann Brenier and Cédric Villani. We have both worked with Yann Brenier, who encouraged us to look at "semi-discrete” digital optimal transport algorithms in three dimensions, which are well suited to cosmological problems.

What is optimal transport?

B.L.:  It is a mathematical theory that studies how to move objects from one place to another with the least possible effort. This theory can serve as a “common language” between physics, mathematics and computer science. It is particularly well suited to the study of physical systems modelled by what is known as the “principle of least action”, which states, for example, that electricity always takes the shortest path. This principle also makes it possible to model the movements of stars and galaxies.

Why set up a multidisciplinary team to create this system?

B.L.: We started discussing the idea of collaborative research back in 2015 in order to provide answers to the big questions in cosmology. We believed it would be interesting to combine the perspectives of three different sciences: mathematics, computer science and physics, more precisely cosmology, which is a very broad field of research.

R.M.: Today, we have an increasing number of satellites and large telescopes to conduct our research, so we also need to learn to design very powerful algorithmic tools to rapidly analyse the masses of observational data collected using these tools. We each knew what we had to do. My job was to translate the cosmological phenomena we wanted to study into mathematical language. Bruno was then tasked with translating this mathematical language into computer language and developing the algorithms to allow these equations to be solved by computers.

What are you trying to understand about what happened in the history of the universe?

R.M.: We already know how to observe galaxies and stars. We are able, for example, to measure their positions and rotational speed. However, there are things we still don’t know, for example the rotational speed of galaxies doesn’t seem to correspond to the known laws of physics.

B.L.: There are a certain things we don't understand about the laws of physics governing the evolution of our universe. For example, we are only able to directly detect around 10% of the matter in galaxies. The remaining 90% resists all attempts at direct detection, although we can indirectly measure its presence in different ways such as through the rotational speed of galaxies and gravitational lensing effects. This additional matter, whose nature is still unknown, is called “dark matter”. Another unresolved question concerns the speed of expansion of the universe which, as we have known since the 1990s, has accelerated over the last four billion years. To make the mathematical model match the observations, scientists at the time reused an old term from Einstein's equations, called “dark energy". Its nature is also currently unknown.

How can you be sure that your tool works properly?

B.L.: You can never be completely sure, but we have conducted the following test which gives us some confidence in the tool: Roya Mohayaee and Sebastian von Hausegger ran a numerical simulation on a large computer of the evolution of the universe from the Big Bang to the present day. Before starting the computation, they carefully hid a certain signal in the initial configuration. They then sent me the final result of the calculation. When we went back in time to the final result, we found the hidden signal with excellent accuracy. This is what we describe in our paper published in Physical Review Letters.

How will you continue this work?

B.L.: Our recent research has been based on “virtual” tests, numerical simulations. The next step will be to carry out identical tests on real data to see if we can achieve the same calculations and test different models of dark matter and dark energy against observations. This will require overcoming certain obstacles that prevent us from collecting all the observational data we might need. For example: we are not really able to visualise what goes on in certain areas of the Milky Way; the central area, which is very densely populated with stars, prevents us from seeing the stars on the other side. Our method needs to be adapted so that it can continue to work even if there is missing data.

R.M.: Optimal transport algorithms, which are very useful in cosmology, are also important in other fields such as economics, biology and neuroscience. Our discoveries could therefore have an impact in other research areas.