Neurosciences and machine learning: Alexandre Gramfort sets out to conquer the brain

Date:
25 Oct. 2017
Changed on 04/06/2020
Winner of a 2015 ERC Starting Grant, for his project Signal processing and Learning Applied to Brain data (SLAB), Alexandre Gramfort has been a member of the Parietal project team - a joint team with CEA-Saclay - since 1st April 2017. His project aims to provide a more accurate interpretation of the electrophysical signals of healthy or sick brains, in order to better understand how they function. A meeting with this young researcher, lecturer and graduate of the French engineering school Télécom ParisTech.

Can you tell us about your career?

From 2001 to 2004, I primarily studied applied mathematics at the École polytechnique. I then went to Télécom ParisTech and ENS Cachan in 2005 to do the MVA (Mathematics, Vision, Learning) master's there. Following this, in 2006, I began my PhD (Mapping, timing and tracking cortical activations with MEG and EEG: Methods and application to human vision) with Maureen Clerc, within the ODYSSÉE team - an Inria team which, at the time, was located between ENS ULM and Sophia-Antipolis and led by Olivier Faugeras.

Then came two years as a postdoc: firstly with the Parietal team at NeuroSpin [i], then at the Martinos Center for Biomedical Imaging [ii] at the University of Harvard in Boston.

Then, in 2012, I returned to Télécom ParisTech where, for the last five years, I have been a researcher and lecturer in the Laboratory for Information Processing and Communication (LTCI), a joint laboratory with the CNRS (French National Centre for Scientific Research). There I have been able to develop my research in statistics, optimisation, machine learning and functional neuroimaging, which enabled me, in 2015, to obtain an ERC Starting Grant.

Finally, since 1 April 2017, I have been a permanent member of the Parietal project team at the Inria Saclay - Île-de-France research centre.

Can you explain to us what your research consists of? 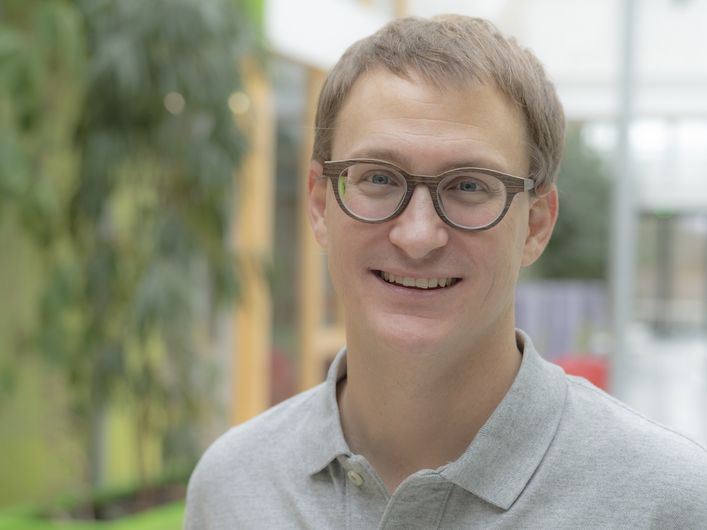 My research can be summarised by saying that I work to improve data analysis technologies in the neurosciences, with the ultimate aim of enabling a better understanding of the brain , be it healthy or sick.

My research work is based on functional brain imaging , enabling a measurement of brain activity over time, thanks to electrophysiology. With the two main measurements - electroencephalography (or EEG) and magnetoencephalography (MMG) - it is a question of measuring the electromagnetic activity produced by the neurons every millisecond , a technique that is a thousand times quicker than a functional MRI, which will take a photograph of the brain approximately every two minutes.

Then, the main part of my research consists in writing algorithms, models and statistical inference techniques, enabling the understanding of the data recordedin order to process them in an optimal manner by determining, for example, the origin of the signal received, the manifestation of this signal in the data, the automatic detection of the sounds recorded, etc.

Tell us about your ERC grant: what is the aim of your project? And what has your grant allowed you to do?

I received an ERC Starting Grant in 2015 for my projectSignal processing and Learning Applied to Brain data(SLAB), the aim of which is to more accurately interpret the electrophysical signals of healthy or sick brains, in order to better understand how they work.

The aim of my research is to make the analysis of EEG/MEG data a more automatic, more effective and statistically more powerful technology than it is at the moment. Today, data from several hundreds of EEG/MEGs are starting to become available. However, this requires so much energy and expertise that the analysis is often only done once by specialists.

Complex problems therefore arise in the processing of the signal and in machine learning . In addition, specific algorithmic tools are essential to combine the different measurements in order to spatially and temporally reconstruct a high-resolution image of the brain at millisecond scale.

This ERC Starting Grant I received allows me to work on this with a team. Indeed, the grant enables me to recruit six scientists (five PhD students or postdocs and one engineer).

In addition, I have been able to continue the development of MNE , software originating from Harvard, and which I have transformed into a library written in Python and whose international community I have been managing since 2011. The idea for me was to reproduce the collaborative development success story of Scikit-learn in the world of EEG and MEG. Today, contributions to this software come from around 10 laboratories over the world and involve hundreds of users . For my part, I am continuing to contribute to the adoption of this software in a very active way by travelling the world over in order to train users in the analysis of EEG/MEG data with MNE. Along with my papers, it is my way of having a direct impact on this community.

Inria is 50 this year, how do you foresee the future of your research?

I think - like many people - that, at the moment, we are at a technological breakthrough on machine learning . Scientific literature is evolving at an incredible rate, and every two to three months we hear that problems that should have been solved in 20 years' time are now deemed to have been solved. Nevertheless, I think that we are still only at the very beginnings of machine learning and the use of the data in the medical world. We are now already seeing machines that defy medical experts on certain tasks for the diagnosis and detection of pathologies, but this still remains very limited. I imagine that, in 50 years' time, Inria will have played a major role in what we call digital medicine , and in particular neurological diseases that increasingly affect this world.