Date:
12 Apr. 2018
Changed on 06/05/2020
The official opening of the new SOPHiA GENETICS offices in Bidart took place on 12 April 2018 with the President of the Region in attendance. It was the perfect opportunity for us to present Nénuphar, a technology developed from the research of the MONC project-team, which has now been directly integrated into intelligence artificial platform of SOPHiA GENETICS company with the help of SATT Aquitaine. 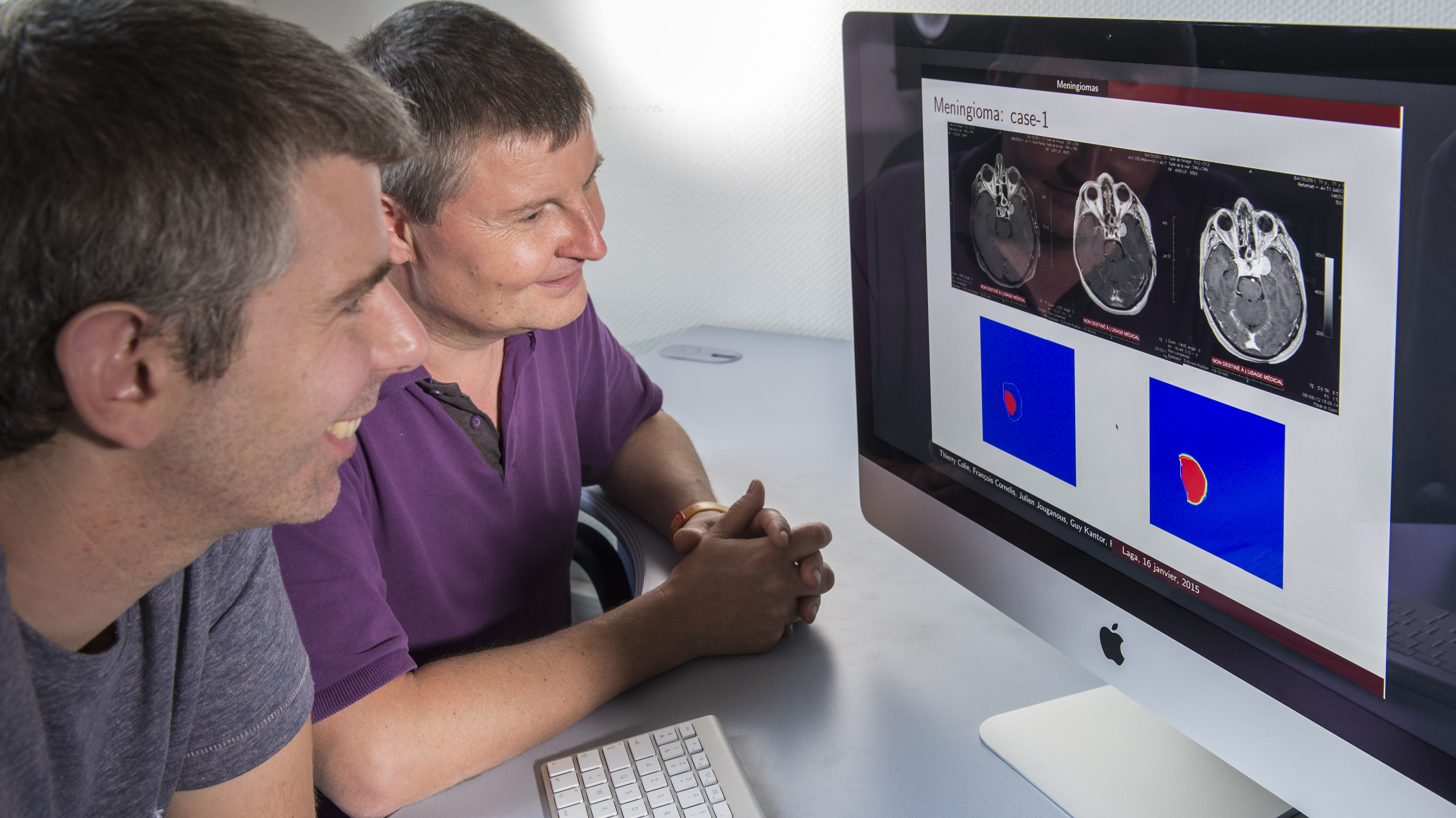 In 2005, the MC2 team was created within Inria FUTURS[1] at the Bordeaux research centre. The team, which was headed up by Thierry Colin, a research professor at Bordeaux INP, focused its research on modelling and its applications in fluid mechanics and laser-plasma interaction.

With the arrival of Olivier Saut, a researcher at CNRS, part of the team switched their research focus to the modelling of tumour growth.

The MC2 project-team came to an end in 2015. However, as Antoine Lavoisier famously said, “Nothing is lost, nothing is created, everything is transformed”, and two new teams were born out of the MC2 research subjects - MONC (led by Olivier Saut) and MEMPHIS (led by Angelo Iollo).

It is therefore after many years of research and development in the MC2 team that the “Nénuphar” technology emerged within the MONC team.

MONC has been tasked with working on modelling in the field of oncology and defining models to process the data created by treatment centres. This data comes from patient follow-up to monitor the progress of their illness and is currently mainly medical imaging data (from MRIs, ultrasounds and other scans, etc.).

Nénuphar is a technology that uses patient data and algorithms developed by MONC scientists to predict tumour growth and help practitioners to make decisions on potential treatments for patients.

MONC had two options to scale-up this software for use in hospitals:

The second option was selected thanks to the help of the Technology Transfer, Innovation and Partnerships team (STIP) and SATT Aquitaine. In 2015, plans for a start-up were born, bearing the name of the technology - “Nénuphar” - with the participation of Olivier Saut, Marie Martin, Julien Jouganous and Benjamin Taton.

For funding and software development, Inria and SATT worked together to support the growth of the start-up.

In May 2017, after a number of presentations at trade shows in an attempt to find investors, Thierry Colin and his team met Jurgi Camblong, CEO of SOPHiA GENETICS at the Meet2Win show specialised in oncology.The start-up had not yet been officially registered and SOPHiA GENETICS was looking for a technology to add medical imaging to their activity. The company has created AI for genomic data analysis in hospitals looking to develop customised medicine.

Their aim is to combine radiomics and genomics to improve patient diagnosis, prognosis and follow-up, from the very first day, through solid tumour detection via medical imaging. By combining imaging data and molecular profiling week after week, practitioners will save time and obtain greater precision in order to make complex decisions as early as possible.

After first meeting at Meet2Win, more detailed presentations and discussions were held between Inria, its partners3, SATT and the company. In late summer, SOPHiA GENETICS proposed recruiting the project team and acquiring Nénuphar, before the start-up had even been definitively created.

For Thierry Colin, project leader, and Vivien Pianet, R&D engineer, this is a great opportunity. “We didn’t have to think twice about it. SOPHiA GENETICS are world leaders in data-driven medicine, with a strong network of over 400 hospitals in 55 countries across the world. They also have a technical platform for data and data security management, as required under forthcoming European regulations (GDPR).”

Vivien Pianet was hired on 1 December 2017, Bastien Oudot on 1 January 2018… and Thierry Colin will join the team on 1 March pending approval from the Ethics Committee.

Remarkably, project members have been able to switch from one step (Inria) to another (SOPHiA GENETICS) without any gaps in their contract thanks to the support of AMIES, which has funded engineers from MONC and allowed for an easy transition.

The MONC project-team wishes to continue working with this company. STIP is currently supporting them in finding the best ways of continuing this partnership.

[1] Inria FUTURS is a research unit created in 2002 for the incubation of three future Inria research centres -Lille, Saclay and Bordeaux (link to online article)