Date:
10 Aug. 2022
Changed on 30/08/2022
Born out of an interest in reproductive biology, the MUSCA project team is specialised in mathematical modelling methodology applied to complex biological processes. Their research contributes to a better understanding of certain physiological changes at the heart of societal issues. Furthermore, the OVOPAUSE project has obtained the support of the National Research Agency. Here, we shine a light on the team’s activities. 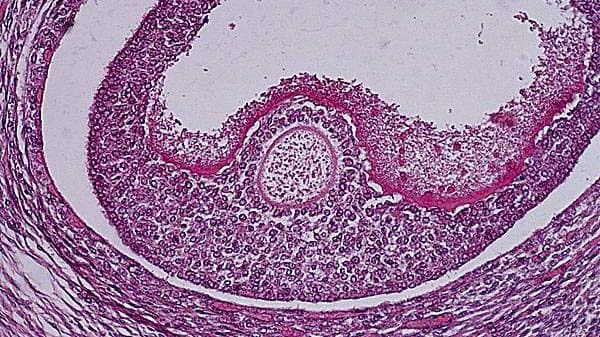 A bridge between mathematics and biology

In this project, there is no question of the biologists simply sending their data sets to the mathematicians, or vice versa, of the modellers just trying to apply their results as is. All the research is based on co-construction. The MUSCA project team was born out of two parallel trajectories, that of Frédérique Clément, a biomathematician with veterinary training, now a director of research at Inria, and that of Romain Yvinec, a mathematician who was recruited to the CNRS-INRAE-Université de Tours “Physiology of Reproduction and Behaviour” mixed unit at BIOS, a team committed to an innovative systems biology approach.

After joining Inria, Frédérique Clément developed her collaboration network and started to work in particular with Béatrice Laroche, who has since become director of research in the MaiAGE unit at INRAE. In 2020, MUSCA was officially created, a joint project-team between Inria, INRAE, and CNRS, made up of long-term BIOS and MaiAGE collaborators.

Other research by MUSCA

Beyond reproductive biology, the project team researchers are also investigating cell dynamic phenomena at play in neurogenesis, differentiation in lines of blood cells, and more. “What we do mainly falls under cellular biology, development biology and cellular signalling,” explains Frédérique Clément.

A major theme for the team, led by Béatrice Laroche, is digestive ecophysiology: the interactions between all the microbes found in the lumen of the digestive tract and the epithelium of the large intestine of its host. This complex dialogue involves many regulation processes that impact health and wellbeing. A series of projects have made it possible to develop a mathematical model of interaction between epithelial cells and the microbiota, which considers the very specific geometry and cellular and spatial organisation of the intestinal epithelium.

The cell as a pivotal point

MUSCA is dedicated to multiscale mathematical modelling of physiological processes. The unique thing about it is that it focuses on the cell as the organisational unit of living things, impacting what occurs at a higher level, in an organ or set of organs, and at a lower level, within cells. This mechanistic approach draws connections between intracellular processes and the functioning of tissues and organs. Cells act on information from intracellular networks, in response to signals in their environment (hormones, metabolites). And the collective dynamic of cells supports biological functions and provides coordination between organs within retroaction loops.

“What we do is systems biology paired with cell dynamics. By going back and forth between models and biological data, we try to consider interactions between the different system components and include them in our overall understanding through mathematical modelling” explains Romain Yvinec.

Unlike classic cell signalling models that consider the cell as a large sack where molecules bump up against each other randomly, MUSCA is based on the latest information, which has provided insight into the importance of the cell’s spatial structuring. There are different compartments, which can expand, divide or merge, and their behaviour impacts cell signalling, and therefore cell response.

This spatio-temporal complexity of intracellular networks and how the cell decodes them for decision-making (to multiply or differentiate itself for example) has given rise to an exploratory initiative developed by Romain Yvinec, COMPARTIMENTAGE. The goal is to “develop formalisms adapted to the modelling of highly dynamic intracellular compartments, which influence cascades of biochemical reactions caused by extracellular signals.”

And that is the genius of the MUSCA project team. Knowing how to create formalisms, carrying out a strictly mathematical study of models, understanding how to digitally manipulate them, being capable of estimating the parameters of mathematical models to apply them to biological information... Less specialised than other teams, “MUSCA is above all a modelling methodology team”, according to Béatrice Laroche. Its strength comes from its ability to create new mathematical tools, in a context that is currently not able to handle the complex problems raised by physiological processes.

Reproduction as the preferred theme

One of the team’s main subjects of study is the reproductive system. It was actually the subject of Frédérique Clément’s thesis, in the late 1990s: “it is important to remember that all of biology is in reproduction,” she emphasizes. “Depending on the function observed, you might be using molecular biology, physiology, neurobiology... It’s an extremely vast field.” This range of disciplines is also found in the REPRO research group, of which Frédérique Clément and Romain Yvinec are active members.

Part of the team’s work includes a focus area aiming to explain the evolution of the population of female gametes (oocytes), from the embryonic phase to menopause. As non-invasive clinical imaging does not provide much information on this topic, the study of animal models (mice, fish, and goats for example) has made it possible to overcome the difficulties in obtaining quantitative information on gamete numbers. This area is based on mathematical models of population dynamics, which make it possible to track the decrease in the initial stock of ovarian follicles and the distribution of follicles according to stages of maturity, until ovulation. Understanding these dynamics could help to preserve reproductive capital and extend the duration of reproductive life, important challenges for our modern Western societies. This was the motivation behind the OVOPAUSE project, selected by the French National Research Agency (ANR).

A few of Frédérique Clément’s key dates and publications

1995: completes studies as a veterinary doctor from the National Veterinary School of Alfort

1997: PhD in Biomathematics at Université Paris 7

2005: habilitation thesis (HDR) in Mathematics and Interactions at Université Paris 6

2009-2013: head of the REGATE (REgulation of the GonAdoTropE axis) project

2020-present: head of the MUSCA joint project team between Inria, INRAE, and CNRS

Here are some of her articles on the reproductive system: