Date:
23 Oct. 2019
Changed on 02/01/2020
This year, the Research Support Department Inria Award was won by a 'multiservice' team. Nine collaborators from Inria Grenoble-Rhône-Alpes are rewarded for their involvement in the creation of 'Espace Login', a showroom open to all that shows, demonstrates and explains the results of the work carried out by the centre's teams. 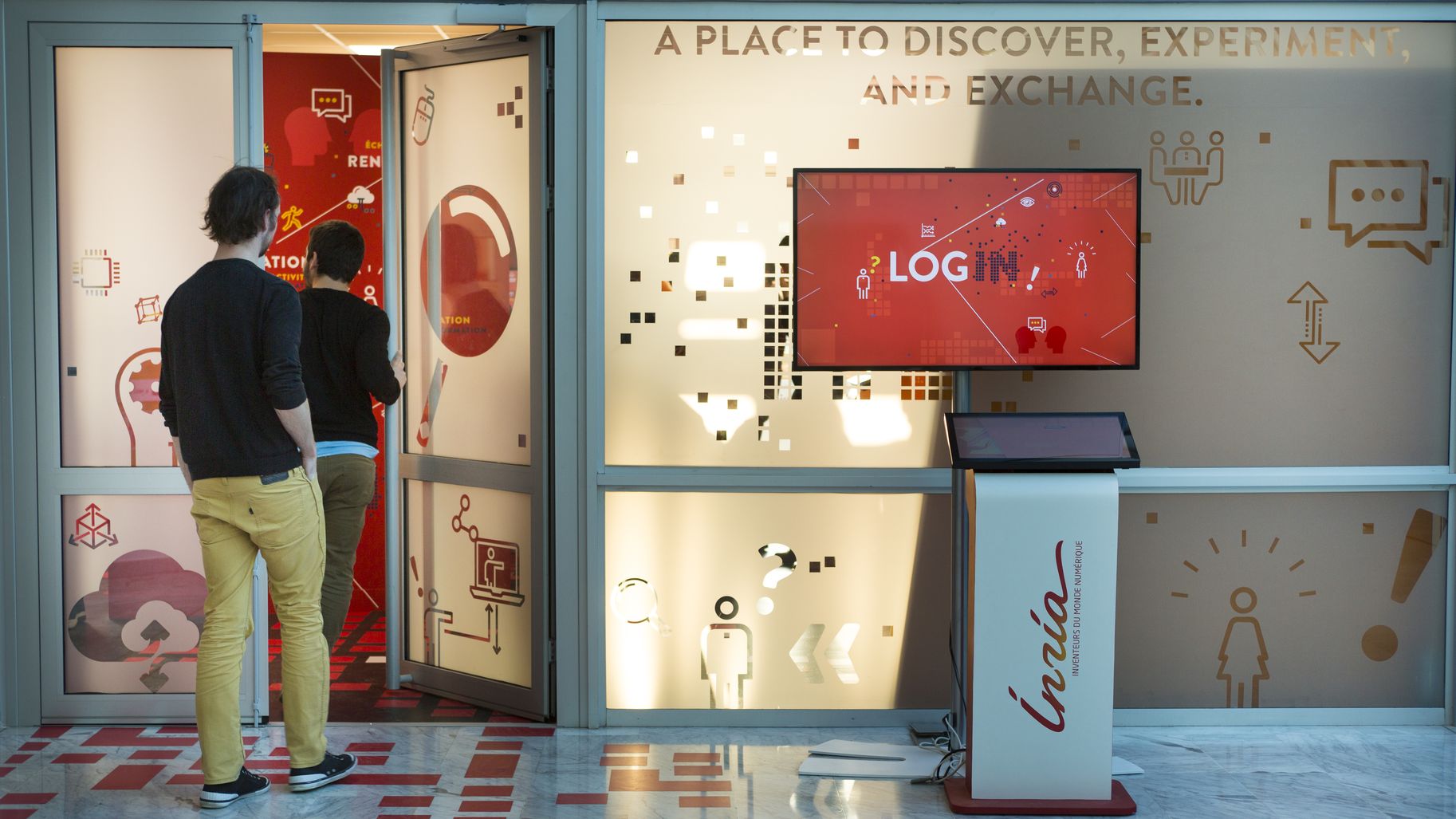 “All of the Inria centres are faced with the same problem: how do we show our researchers' work in an effective way? ” Patrick Gros, the centre director, points out. In order to answer this question the management team, together with the teams from the Communication and Digital Science Education department (SCM) and the Technology Transfer, Innovation and Partnership department (STIP), launched the idea of creating a demonstration area. Three years - and a few ups and downs - later, 'Login' was inaugurated on 2 May 2017. This showroom, covering 100 m2, presents some of the research projects carried out in Grenoble in an interactive and educational way. Over the course of the visit it is possible, for example, to observe your bones, muscles and organs by looking at yourself in the anatomical mirror designed by the Imagine team, try out the distorting filters in the Maverick team's photo booth or understand, thanks to an explanatory video, the contribution of the work of the Chroma team with regard to autonomous vehicles. In total, around 10 research projects are presented in Espace Login.

This great success was made possible thanks to the involvement of the collaborators at the Grenoble centre, who have been working on the project since the beginning of 2014. “We began by holding discussions, Patrick Gros recalls. We needed to define what we wanted to do with this area, and what we were going to put in it. We also went to look at what our partners were doing elsewhere. Then there was all of the implementation, working with the service providers, monitoring the financial package... none of which was straightforward. ” It is all of this work that is rewarded by this award given to nine prizewinners* from the Communication and Digital Science Education (SCM) and Technology Transfer, Innovation and Partnership (STIP) departments, but also from General Services (SG) and the Administrative, Financial and Asset Affairs department (SAF).

Supporting researchers in the dissemination of their work

A major part of the work concerned the design of the demonstrations presented in Espace Login. The idea was not to show off the work as trophies in a display cabinet, but for visitors to be able to appropriate it, understand it, ask themselves questions...Although many teams already have demonstrators, they had to be adapted for the showroom: improve the interfaces, narration, scriptwriting... and, above all, ensure that they work without the researcher being there. For the teams whose research is more theoretical and less visual, the institute called on a company that created animation films which explain, in an educational way, what the research does and its purpose. “The aim was to showcase the work of our researchers without having to constantly call on them. We supported them in the dissemination of their work with new tools and in a more effective way. ”

As the Grenoble centre is spread across several sites, it was also necessary to create tools that were easy to transport or replicable. In fine, the demonstrators can easily be reused by the researchers during conferences or for communication purposes. Some will even be presented at the Inria 50 years national event.

An area open to all

Espace Login, located next to reception, has been open every day since its inauguration. Guided tours are also organised for those who would like a more comprehensive explanation. “Espace Login is of interest to all types of public. It is an area for digital science education where we welcome students, teachers or even the general public. Industrialists who come to the centre are also shown around it. It is a real tool to show what is being done at Inria and how we do it. ”

In the beginning, Login was designed with a small group of volunteer teams then, since its opening, several researchers have expressed their desire to take part in the project. And the director would also like it to be emulated in the other Inria centres. “A lot of material is produced within the institute: films about the teams, demonstrations...And I think that we would gain a lot by having a sort of bank of research demonstrations that could be easily exchanged between centres. I believe that we really need to encourage this type of initiative, one that makes it possible to get our work known in a more open, easier and more national way. ”

Marie Collin, head of the Communication and Scientific Culture department (SCM)
"I took part in the design, implementation and monitoring of the LOGIN project and am now involved in the communication and facilitation of this area, which has been accessible to the public since May 2017. It is a very motivating project: it was a question of providing ourselves with a place and equipment enabling the centre's research results to be shown to a wide audience, on an accessible and regular basis, and without constantly calling on the research teams. It was an idea that had been close to my heart for a long time. It required time and investment, but I am proud of the result we have today. This award is a great opportunity to increase Login’s visibility."
Jean Panzuti, head of the General Services department (SG)
"To set up ‘Espace Login’, we transformed the meeting room and extended it to create the showroom area. I took care of project management (analysis of requirements, estimated budget, schedule, specifications, plans, follow-up of the work, deliveries, etc.). On the building side, we were faced with a real architectural issue, with major constraints. Creating this area was not without its problems, with regard to the budget, schedule, etc. We also had to demonstrate the utility of this tool for the teams... We had major doubts about the feasibility of the operation, but the entire team had its heart set on creating this area. But, in the end, the result is there; it is well-used and blends perfectly into the reception area. We have a great tool enabling the promotion of our centre."
Élise Taillant (STIP), project leader for the creation and facilitation of Espace Login
“The aim of Login is to 'connect' a diverse public (industrialists, scientists, institutions, students, schoolchildren, etc.) to digital technology. It is a meeting place where we show what we do at Inria, not in a display case or a museum, but in order to get people to ask themselves questions, to go further, to open up new horizons whether from a 'technology transfer' or 'digital science education' perspective. This project has been an exciting and absorbing one, because we set ourselves very ambitious goals. Even so, I did on occasions ask myself what I had let myself in for, given the number of problems we encountered in order to successfully complete this project... Researcher support for this tool was a challenge; knowing if the space was going to effectively attract visitors was another. After these first few months, we are pleased to see that it works. The Inria Award confirms this success and proves that such a tool has its place in our institute and is of real interest. Moreover, it is wonderful recognition for the significant amount of work that was carried out jointly with the different centre departments and the researchers. Projects of this kind strengthen the links between staff and have an impact beyond the duration of the project.”