Inria’s ambitions for 2023: the concrete commitments of Inria’s “objectives & performance agreement” signed with the French government

Date:
14 Feb. 2020
Changed on 20/02/2020
As “software takes over the world”, France needs to create the conditions for its digital sovereignty in order to maintain its strategic autonomy. What Inria, the French National Research Institute for Computer Science, wants is to meet this challenge through research and innovation by developing scientific, technological, and industrial leadership in the digital field in conjunction with its partners. The Inria Ambition 2023 project was launched on Tuesday 18 February 2020 in the presence of Frédérique Vidal, Minister for Higher Education, Research and Innovation and Cédric O, Secretary of State for Digital Technology.

This makes Inria a courageous and committed contributor to the academic, industrial, and entrepreneurial digital ecosystem.

Our objectives over the next four years

Accelerating the development of France’s scientific and technological leadership, as part of a Europe-wide approach

Inria has chosen to focus on several scientific themes including core digital technology, digital security, artificial intelligence and quantum computing, and to meet major societal challenges in which digital technology plays a key role (from personalised medicine to precision farming, as well as reducing the energy footprint of digital technology). To do so, Inria is strengthening its unique organisational model, which is based on project teams with agile and focused innovation research roadmaps geared to risk-taking, interdisciplinarity and software development, and committed to partnerships, and sharing this model with its partners, i.e. major research universities or organisations (CNRS, CEA, INRAE, INSERM, and in the future IFPEN, too). Its scientific policy also supports the development of the European research and innovation space, whether via its involvement in EU programmes (Horizon Europe, Digital Europe, EIT, EIC) or the development of strategic bilateral partnerships, particularly with Germany, as demonstrated by its recent agreement with DFKI on artificial intelligence.

Making an economic impact in the regions, with the aim of helping to revitalise and ensure the long-term future of a French and European industrial base using and developing digital technology

Inria has chosen to focus on businesses that create jobs in France, via bilateral agreements and joint project teams. Through its partnership with Bpifrance, Inria has set itself the aim of scaling up for technological entrepreneurship with the target of 100 digital Deeptech startup projects a year in 2023. Central to this scheme is the creation of Inria Startup Studio to codesign entrepreneurial projects backed by public research on digital technology, a programme with its roots in the major research university campuses where Inria works. By creating a range of continuing education courses on freeware developed through public research, Inria also wants to support the digital transformation of French small, medium, and intermediate-sized enterprises.

From coordinating the AI Plan to its clear focus on the Security-Defence sector, with partners from ANSS (French national information system security and defence authority) or AID (French defence innovation agency), as well as digital regulation with DGI (French General Business Directorate), Inria has a real role to play alongside the French government. Inria is also continuing to fight the good fight, i.e. inspiring young people, particularly sixth-form / high-school students, to study science and technology, via the “1 scientist - 1 class? No problem!” project, with its partners and the French Ministry for National Education and Youth.

Inria is firmly committed to the development of major research universities. The changes to Inria’s site policy have resulted in strategic convergence with partners, via symbolic acts (such as renaming its centres) and the launch of its digital-specific operational programmes supporting regional stakeholders’ strategies. Our mission also includes the creation of an Inria centre in Lyon and the targeted strengthening of the two branches in Montpellier and Strasbourg, based on existing partnerships and focused on the specific scientific strengths of each region.

Implementing an effectively and clearly organised research and innovation infrastructure, and being an exemplary employer.

Inria needs to change if it wants to achieve its overall aim. It is consolidating its organisation by making sure that its culture is shared by everyone involved, under good working conditions, by strengthening social policy promoting parity, taking account of disability issues, and combating discrimination and all forms of harassment. So societal issues feed into the challenges that Inria faces as an employer. A good example is the role of women at Inria and more generally in the digital field: Inria has set itself the aim of making sure 30% of its project team managers are women by 2023 (compared to 13% today). Employing disabled staff, particularly scientists, is another issue on which Inria has adopted a proactive policy, with the launch of a Disability Plan in October 2019. 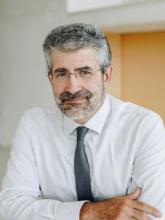 « Inria’s ‘objectives & performance agreement’ reaffirms our role as a key player in the French government’s fight for cyber-sovereignty, through research and innovation. It frames our aims, commitments and responsibilities, and determines our duties as a French public research institute. Our work requires unswerving will, because the challenges are complex and the difficulties numerous. It requires the confidence of all the stakeholders involved, whether internal or external, and on their courage to see through the changes set in motion by Inria or driven by ever-faster digital development. »