Inria and TDR are designing the gripper of the future

Date:
13 Nov. 2018
Publish on 17/01/2020
On December 6, the Inria Lille research center will inaugurate its new demonstration area, where the results of some partnerships between Inria teams and start-ups will be presented. The prototypes include a robot gripper developed jointly by project team Defrost and the company TDR. 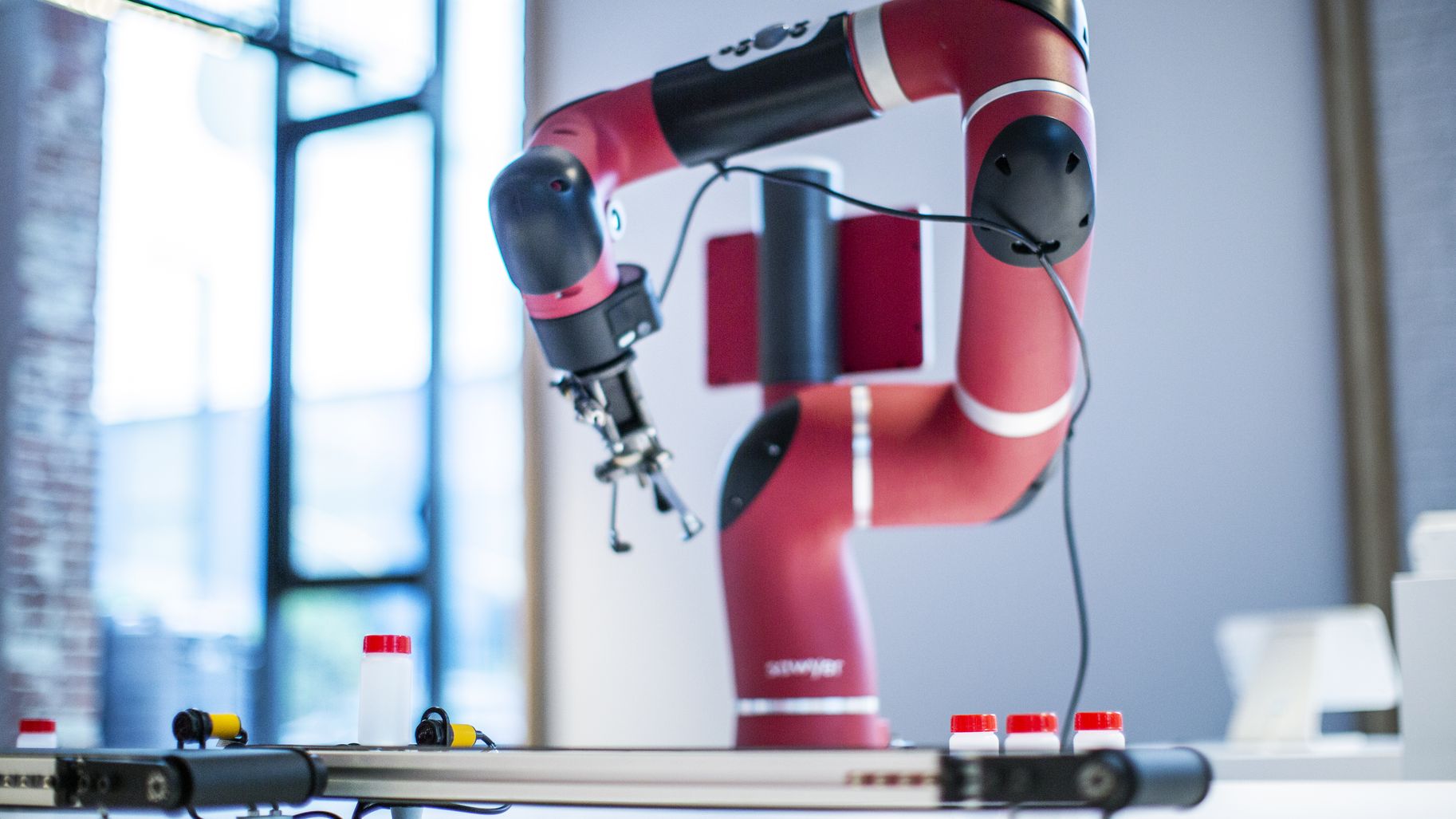 Imagine you are in a perfume bottling unit. Using its gripper, a robot picks up small glass bottles one by one, and sets them down to be filled. Does that not surprise you? Well, maybe it should... Because the situation presents many issues for a robot: the bottles are fragile and must therefore be handled with care; they arrive in a disordered fashion, which means that the robot will not “know” exactly what position they are in; and, finally, they must be placed in exactly the right position so that they can be filled up correctly. Faced with this type of situation, a robot equipped with a classic gripper will quickly show its limits! The company TDR from northern France is about to unveil a gripper that is capable of handling perfume bottles with optimal control, as well as all kinds of objects of different shapes, thanks to a partnership with project team Defrost* from the Inria Lille research center.

TDR is a young company founded in Lallaing, in the north of France, in 2014 with a team of around 20 staff, supported by an engineering and mechanical design firm of around 30 people. The SME is specialized in the design and integration of collaborative and interactive robotic solutions for small and medium-sized companies working in a variety of sectors, including the agri-food, medical, chemical, steel, car and cosmetic industries. “One of our core activities is developing specific grippers for different types of activity, be it palletization, machine loading, gluing, cutting or marking, ” explains Dominique Watier, Director of TDR. “The project conducted with Inria started from the desire to come up with a versatile and affordable solution that could provide an alternative to traditional, costly, industrial robotic devices, such as positioning guides and other complex conveyor systems. ”

...so why not deformable ones?

“At Defrost, we are working on issues involving deformable robotics, an emerging branch of what is generally known as soft robotics, ” says team leader Christian Duriez. “We are particularly interested in the modeling, simulation and control of soft robots that are inspired by nature and move through deformation, thereby offering more simplicity, security and efficiency than their articulated relatives for applications in fragile or highly demanding environments. ”

A partnership made possible thanks to the InriaTECH platform

It’s thanks to the Matikem competitiveness cluster that the venture began. “TDR had approached Matikem to find contacts that could meet their needs and we presented them to Defrost, who wanted a practical case to work on in order to develop their research in deformable robotics. And the Matikem teams put the two parties in contact, ” explains Jean-François Bouin, technology transfer and partnerships officer at the InriaTECH platform, which, for the last four years, has been connecting engineers and project managers in order to support industrial transfer projects with companies in the Hauts-de-France region.

Launched in June 2017, the project took place over 8 months – a short time frame typical of partnerships supported by InriaTECH. “This is crucial for companies that want to work with Inria and need quick responses, ” adds Jean-François Bouin. “It is precisely to meet these challenges that InriaTECH has its own team of engineers, trained to strengthen the various Inria project teams through industrial transfer projects. ”

From problem to solution

“The first step in our joint work was to accurately define the problem we needed to solve ,” adds Christian Duriez. “In this case, it was a matter of developing a concept of gripper capable of picking up an object whose exact position is unknown. The concept needed to be general in order to not have to redevelop the gripper from scratch each time. We used a concrete application – perfume bottles – starting from a real need of TDR’s, which led us to developing a concept of gripper with progressive rigidity: soft when it grasps the object, gradually stiffening to set it down with precision. ” Initially equipped with silicone petals, the gripper was finally fitted with printed nylon fingers that are closed by lowering a ring, which itself was printed to suit the shape of the object to be handled.

The prototype is now finalized and ready to take place among the demonstrators to be exhibited in the showroom that Inria Lille will inaugurate at the end of the year. “The product will be commercialized following the inauguration, first of all for collaborative robots before undoubtedly opening up to industrial robotics ”, adds Dominique Watier. “This does not mean, however, that our partnership with Defrost is coming to a close. The factory of the future is a vast universe asking to be explored! We are already thinking of new ideas that we could develop with Defrost! ”