Date:
12 Dec. 2019
Changed on 31/01/2020
Understanding complex optical phenomena is essential when it comes to developing the next generation of optical fibres. In order to meet this need, mathematicians at Inria Lille are lending their expertise in digital simulation to physicists specialising in optical fibres.
To discuss how this transfer works, we met up with Guillaume Dujardin, an Inria researcher and expert in applied mathematics who is involved in different multidisciplinary collaborations 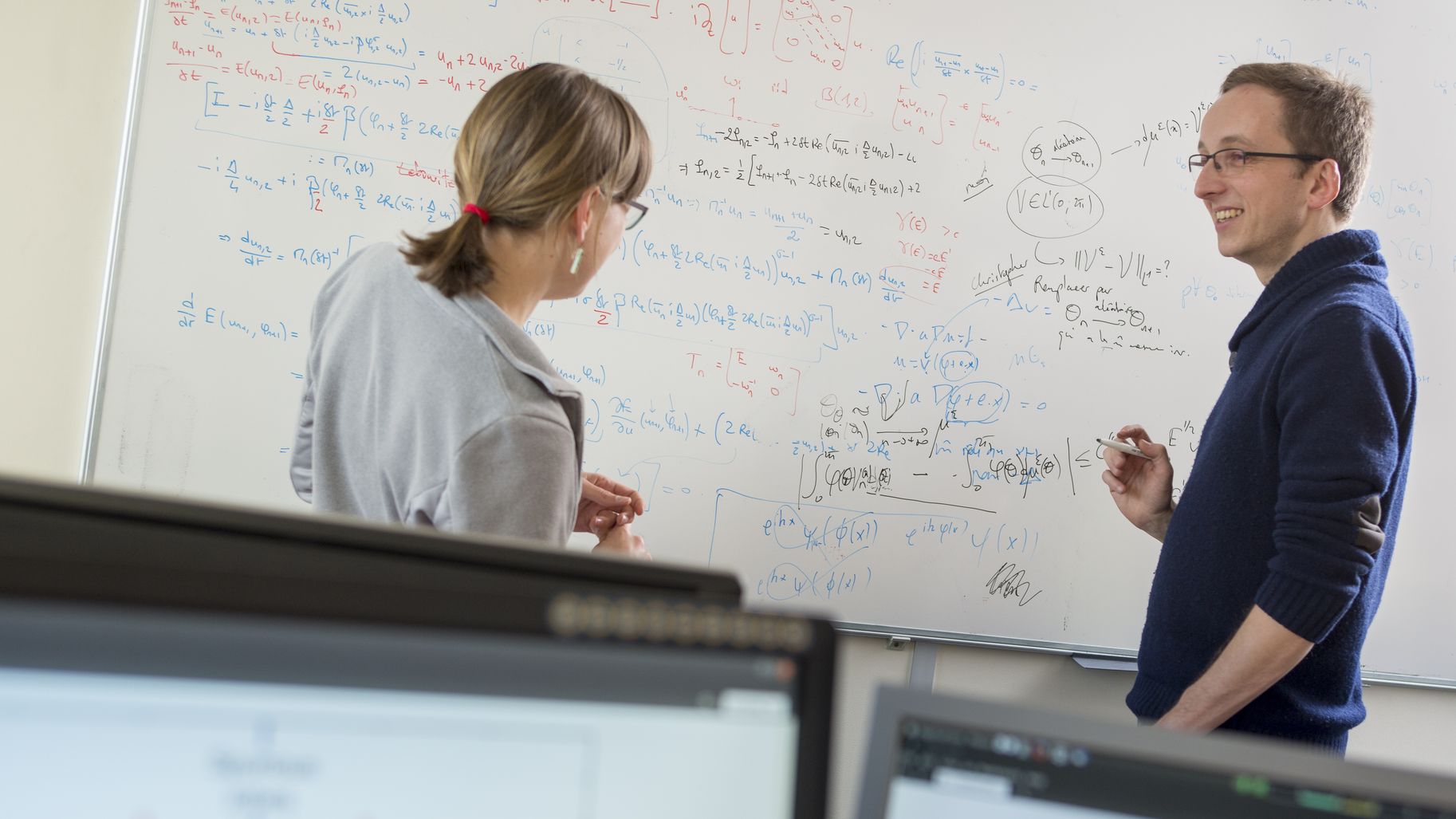 Delivering broadband and transmitting information across vast distances, optical fibres have made a major contribution to innovations in telecommunications, the internet and imaging. In their quest to improve performance levels, designers encounter complex physical problems. By drawing on the research carried out by scientists in a range of disciplines (physics, mathematics, IT), they find efficient technological solutions.

Being able to transport information across thousands of kilometres is crucial for fibres. Imagine that a ray of blue light is injected into a fibre. Once it has passed through the fibre, will the signal come out intact, or will it have been altered in some way? In other words, will we see the same blue or a different colour altogether - or perhaps no signal at all? “This phenomenon, known to optics experts as modulational instability, is something that engineers have to be able to bring under control”, explains Guillaume Dujardin, an expert in mathematics and head of the Mephysto-Post * team at Inria Lille. “There are different possible causes for signals becoming distorted or dulled, including defects in the geometry of the fibre, for example: digital simulation can be used to quantify these, in addition to anticipating them and correcting them.”

The Mephysto-Post team are interested in mathematical equations used to describe different physical phenomena, such as those in optics or thermodynamics. Their work involves developing digital methods capable of simulating these phenomena on a computer. “On the subject of optical fibres, we work alongside physicists within the LabEx CEMPI*, which was set up in 2012 in Lille in order to encourage researchers from different specialisms, particularly mathematicians and physicists, to enter into various different collaborative projects.”

Within this laboratory of excellence, researchers from the PhLam,*** a laboratory dedicated to studying light and matter, work directly with researchers and engineers from the Prysmian Group, a world leader in electric power transmission and telecommunications cables and systems.

“By entering into dialogue with physicists from the PhLam, we were able to devise a mathematical model capable of representing modulational instability”, explains Guillaume Dujardin. The equation describing the propagation of light within fibres is extremely complicated, and cannot be used to develop a direct understanding of the phenomenon of modulational instability. For this reason, Inria researchers put forward a simpler model for analysis, which describes the physics of the phenomenon in detail. “The idea was to focus on the propagation of the disruption to the signal as opposed to the propagation of the signal itself, and to describe it using an equation that is easier to understand”, explains Guillaume Dujardin.

The hypotheses behind this model were discussed at length by the mathematicians and physicists involved. The simplified model led to discoveries regarding solutions to the complex equation itself, while the results from the tests carried out on an experimental system confirmed the validity of the digital predictions. “We were able to construct more reliable calculations by taking different perspectives from theorists and experimenters.”

The scientists were thus able to use their model to explain how faults in a fibre beam can influence the propagation of light. The calculations make it possible to characterise disturbances in the optical signal, producing data that engineers can then use to design systems eliminating disturbances caused by modulational instability. “Through simulation, designers of fibres are able to precisely characterise the origin of optical disturbances, in the hope of finely correcting signals and thus ensuring quality is retained when the signal passes through the fibre.”

On the back of this initial result and its transfer towards the world of industry, the mathematicians are now pushing their calculations further, turning their attentions to multi-mode fibres capable of transporting multiple signals at once. Still relatively uncommon in an industrial context, these fibres can be used to concentrate optical energy, and have found a home in medicine.

“The mathematical model we’re working on brings hundreds of complex equations into play (nonlinear and coupled equations). We are working to develop next generation digital models capable of solving these equations. The initial results have been encouraging - what we now need is the opinion of physicists, who we will speak to in order to improve our model or to interpret the results.”

Collaboration has proven to be a key asset for researchers in tackling complex theoretical questions, but it also requires a degree of commitment. “Faced with new problems, we spend a lot of time speaking to experts from various fields in order to develop an understanding of the concepts they use and to find a common language to base our collaboration on. This is a crucial step if we want to work well together, and it is also enormously beneficial for everyone involved, providing new knowledge and ideas and enabling us to tackle new scientific challenges.”

***PhLam: A laboratory for studying the physics of lasers, atoms and molecules (UMR 8523, CNRS/the University of Lille), which specialises in research into light and matter.

Other collaborations of the centre Inira Lille - Nord Europe

Inria and TDR are designing the gripper of the future

Inria and Keolis: security through modelling