Inria to present its demos at SIDO, the leading event for the IoT, AI and robotics

Date:
28 Mar. 2019
Changed on 23/11/2020
For its 5th edition, SIDO, a cornerstone event in the world of IoT, is aiming to break down the barriers between different disciplines, combining the IoT, AI & robotics. Inria will present fourteen demos on 10th and 11th April in Lyon, including 5 start-ups, demonstrating the way in which these new companies are able to boost the economic impact of ambitious research projects.

For the past four years, the aim of SIDO has beento give structure to the IoT sector in Europe, helping companies to identify new growth levers by integrating them. For its 5th edition, the event is set to change course, combining the IoT, AI & robotics as it looks to break down the barriers between these disciplines. From building blocks to solutions, SIDO stimulates innovation, bringing together three converging ecosystems.

This event will provide an opportunity to tackle new challenges facing industrial firms and services, whether technological or organisational, all the while underlining its international dimension. 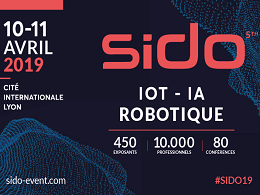 Mobile robots are currently unable to move around within a dense crowd without getting stuck or becoming dangerous. In order to enable them to reach their goal, without there being any risks for the crowd, CrowdBot are investigating solutions to technical and ethical problems relating to these robots. This demonstration invites users to immerse themselves in a street scenario through the use of a virtual reality headset. They will then be able to see how the robot moves around within the simulated crowd and how it interacts with people.

The “neural network” algorithm calculates the 3D position of a human’s limbs based on an image, the goal being to render neural networks more accessible to everyone. This algorithm has been designed to be able to operate interactively on a standard laptop equipped with a webcam. The LCRNnet algorithm was developed by researchers at the Inria Grenoble – Rhône Alpes research centre and is available open source.

This project, which originated as a collaboration between Orange and Inria, demonstrates the feasibility of a smart home being controlled using the brain through an EEG headset, and is targeted primarily at people with disabilities. The interface enables users to interact with their home using mixed reality goggles (Microsoft©Hololens). Icons corresponding to objects with which they may interact or possible actions they may perform are displayed in the user’s field of vision.

Pl@ntNet is a citizens’ scientific platform based on artificial intelligence that is used to gather observations on plants. It contains information on roughly 20,000 species. The database is added to on a daily basis, with contributions made by users of the mobile application. Plant biodiversity can be monitored in detail by analysing thePlantNet data flow, opening up a range of opportunities when it comes to new knowledge and environmental education.

RIOT, a free operating system for the Internet of Things (IoT), supplies large-scale hardware support and standard communication protocols, making it possible to develop IoT applications quickly and easily, from the objects themselves right through to the cloud. It is ultra-light and secure. This demonstration will present a sensor network employing the use of RIOT, with the data sent to a web dashboard. The sensor software is updated via a secure system.

Scuba is a toolchain that can be used to better diagnose and analyse any risks or threats that could affect connected objects in order to anticipate and manage them. What sets it apart is that it focuses not only on the connected objects themselves, but also on their environments, considering them as one single whole. The aim is also to identify intruder channels that could be used by attackers.

Silecs is built on the foundations of the FIT and Grid’5000 infrastructures, and will enable users to tackle the scientific challenges of the Internet of Things, data centres and the networks linking them together. It will provide a multiform, experimental platform capable of presaging the infrastructures of tomorrow at a realistic level in order to test models, algorithms and languages with challenges relating to scaling up, complexity and control.

Stackilab helps chief information officers (CIOs) with any projects they may have involving the deployment and coordination of IoT services. Developed by Inria researchers and Stackitect engineers, this unique platform can be used to compose, simulate and analyse multilayer network, cloud and IoT application interconnections. The predetermined models, the intuitive scenario generation interface and the usable dashboards help accelerate innovation, IT/OT integration and investment decisions.

VLC (Visual Light Communication) technology, based on a software-defined approach and developed using USRPs (Universal Software Radio Peripherals), illustrates the capacity of a system to adapt to new environmental conditions that can impact upon the quality of communication, including the type of light (artificial or natural).

Inria start-ups and collaborations at SIDO