"Your brain is a superhero", a book by Anatole Lécuyer

Date :
21 Oct. 2019
Changed on 25/03/2020
How do you make someone believe they’re living in a virtual world? That's the question Anatole Lécuyer, a researcher at the Inria Rennes - Bretagne Atlantique centre, set out to find an answer to. Lécuyer has just published a general-interest book in which he discusses his rather strange job as an illusionist and the equally surprising properties of our brains. 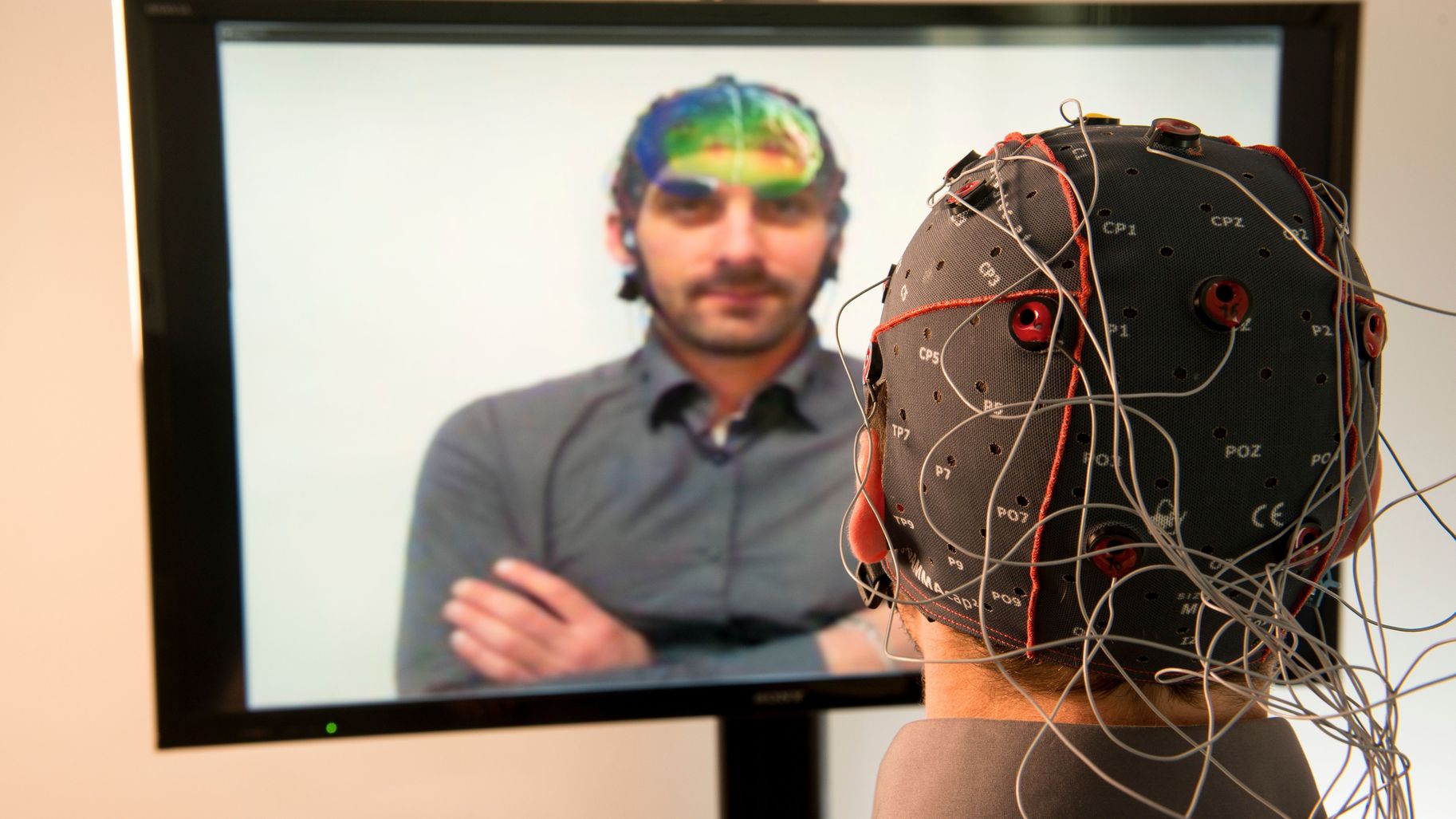 First came superior maths. Then specialist maths. This was followed by a degree in engineering. After this, a first job in an aeronautics company. And then… Anatole Lécuyer quit. The desire to tackle virtual reality ended up getting the better of him and he was drawn towards the world of research. Once he had a PhD under his belt, he was snapped up by the Inria centre in Rennes, and was soon put in charge of a team. Twenty years later, he’s only now getting the chance to look in the rear-view mirror. Lécuyer has published more than 200 scientific papers and has played a part in a whole host of inventions. Some of the more memorable among these include the six-fingered hand, the eyes in the back, or tactile images that you can “touch” with your eyes.

It's science - but with a hint of fantasy. “Within our team, we like things that are a bit out of the ordinary ”, explains the researcher. Scientific results are not works of art, but that doesn’t stop us from trying to introduce an artistic dimension. Let’s call it creative pleasure. ”

Inside a virtual reality laboratory 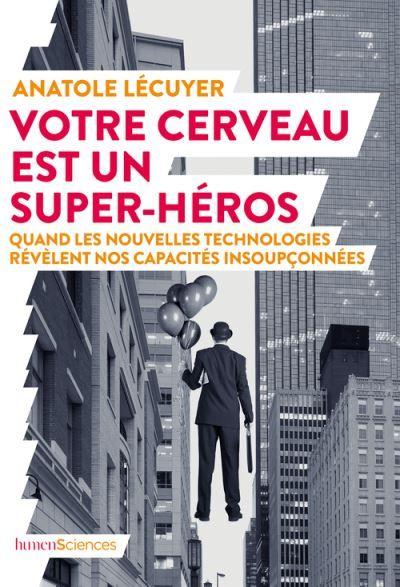 The book is part of the HumenSciences collection and is targeted at the general public. “It’s something I would never have thought of on my own. It was an editor who suggested it to me. ” It’s a good job they did! This is the sort of book you read in one sitting. It takes readers inside a virtual reality laboratory. As you would expect, the book is littered with technological feats, but that’s not all it contains. “Our research is very much geared towards human beings. We build immersive interfaces where the goal is to lead or charm users, either via their senses or cognitively. For these interfaces to have a chance of working, we need to focus on the human aspect. We need to get to know humans, to understand how their perception and their cognition work. ”

And that's when things get interesting. When someone is walking, for example, their internal ear acts as an inertial navigation system, capturing every movement of the body. Right. And? Well, as Lécuyer’s book reveals, a minuscule electric current applied to the right nerve can be enough to upset this finely-tuned mechanism.“Your body will start to move irrepressibly towards either the left or the right. I had the chance to test a demo of this at the University of Tokyo. You’re fitted with two electrodes, one behind each ear, before being asked to walk in a straight line. Behind you stands an operator with joysticks controlling electrical impulses. No matter what you do, you find yourself acting like a remote-controlled toy, moving from side to side. ”

How is this possible? “Each electrical impulse generates a perception that you are leaning in a certain direction. Your brain then compensates for this artificial inclination by tilting your body in the opposite direction, and as you are walking, this is enough to make you change direction. This device turns you into a puppet, completely under someone else’s control! ”

Let’s go back to Rennes and take a stroll through Immersia , one of the largest virtual reality rooms in the world.“Imagine a cinema where the walls and the floorare also screens. Using stereo glasses, and through the depth effect that is created, viewers are literally projected into the scene, with a very powerful sense of immersion. ” Feeling dizzy? “If you stand next to a virtual cliff edge and ask yourself to jump into the void, there's not much chance of you doing it willingly. I tried the test myself a number of times, but each time, I always felt a slight apprehension, as though my body or my brain was resisting and was trying to stop me from doing something so stupid, even if it was only virtual. ”

That said, the researchers still have a lot of work to do. “Imagine that you're off on holiday. You’re lounging on a beach. The hot sand. The sunshine. The blue sky. The palm trees. The smell of the open sea. The sound of lapping waves. The gentle caress of the wind. You’re beset by a multitude of different sensations, each triggering different emotions. How can you go about recreating this sensory engagement with the world in a simulation using technology? It’s an immense challenge, and one that is incredibly complex. There are so many interconnected psychological, perceptual and cognitive phenomena that we're still a long way off mastering. ”

For this kind of work, a multidisciplinary approach is required, working in close cooperation with neuroscientists. This collaboration works both ways, however: “Virtual reality is a new experimental paradigm that could prove highly powerful when it comes to studying the brain, psychology and human behaviour. ” New “brain-machine” interfaces are sure to emerge from this fertile cross-breeding work.

Evidence of this comes in the form of another invention: the Mind Mirror. With an electroencephalographic cap fitted over their head like a shower cap, users see their face on a computer screen. Through augmented reality, the different areas of the brain are shown at work on the screen, lighting up depending on brain activity. “If you tilt your head slightly, you can watch your frontal lobe in action. Move a bit higher and you can see your motor cortex. If you move your fingers, this area should be activated in the mirror. Now breathe, and try to relax. If you successfully manage to enter a deep state of relaxation, you should see a wonderful release of alpha waves: a huge red wave spreading across the surface of your brain, lighting up a good number of your cortical areas. ”

So what has all of this research led to? “Sometimes we get great results that don’t actually lead anywhere. Other times, it’s the opposite, and what started out as an idea results in a tangible product that people are able to use. Thanks to the work carried out by our team, a start-up was able to design a certified neurofeedback device capable of treating attention deficit disorder (ADHD) in children. ”

Another of the Rennes team’s achievements is OpenViBE, an opensource software program that can be used to analyse brain signals and to then link them with direct controls for machines. “With more than 7,000 downloads a year, this scientific software is a real hit. It’s gotten away from us to a certain extent. It’s doing its own thing, and that’s fine by us. We’re very happy about it. There are people now using it to do things that go way beyond what we had thought was possible at the start, which is really very rewarding. ”

The book is a taster of a virtual world that might soon be just a click away, but it is also teeming with anecdotes from behind the scenes of a laboratory. “We’re focused on these grand ideas, but at the same time, we have the same daily routines as any other workplace. We chat with our colleagues around the coffee machine, just like everybody else. Research is about people coming together, about discussions, surprises, chance, forks in the road, tiny errors that occur throughout our projects. All of this helps give a better understanding of scientific results. I wanted to talk about all of these humorous aspects in a way that was a bit more personal. I hope that my book will encourage young people to take up a career in research. ”

Your brain is a superhero - Anatole Lécuyer HumenSciences Editions - In bookshops : 9th October 2019 - €21