Date:
29 Oct. 2018
Publish on 17/01/2020
In the 18th century, Angélique du Coudray laid the foundations of medical simulation by training 5,000 midwives using fabric models – and saving many lives in the process. Today, Stéphane Cotin has adopted the same approach, with resources at the cutting edge of research into numerical simulation. 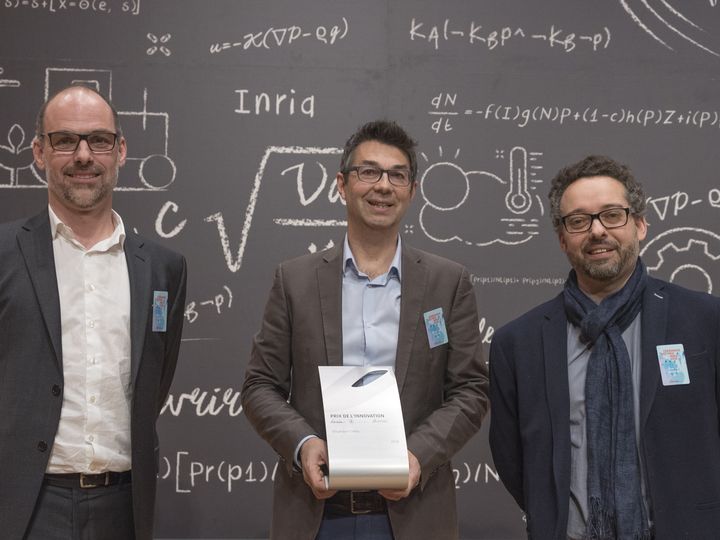 Bitten by the IT bug during his childhood and with a keen interest in images from the outset, Stéphane Cotin naturally turned to medical imaging during his studies. While working on his PhD on deformable anatomical models to simulate surgical procedures, he was contacted by a start-up in Cambridge that wanted to apply his work to the field of interventional radiology. “In the end, the lab that managed the start-up decided to refocus its activity and the project was aborted. So I found myself without a job in the United States and with a visa about to expire ,” recalls Stéphane Cotin. “Fortunately, I soon met a doctor who was passionate about new technology and together we set up a research centre that was integrated into a structure common to MIT, Harvard University and Boston hospitals, in order to develop new modelling and simulation tools for medical applications. ”

His experience in America would last eight years, marked by significant advances that give the young researcher a high profile, while simulation was gradually gaining ground in North American medical courses to such an extent that it would become a central part of the training and evaluation of surgeons. “In 2006, I was contacted by several people from Inria who were in charge of structuring the future Lille, Bordeaux and Saclay research centres. I then headed for Lille with an idea in mind: to invent an open source environment that would enable different users to develop their own medical simulation tools. ” Thought up a few years earlier while sitting on a couch, the project was to become SOFA. “More than just a software base, the aim was to offer a toolbox with solid architecture conducive to a great number of innovative combinations and assemblies .” 11 years after its creation, SOFA is at the heart of the work of dozens of research teams, both in France and abroad, and is used by many companies, not to mention 2 Inria start-ups.

Stéphane Cotin's Lille adventure could have continued for some time, but in 2010, when he had just set up the SHACRA project team, his career took a new turn with two requests. The first was from Professor Jacques Marescaux, a pioneer of telesurgery and minimally invasive operations. “He wanted to set up a university hospital and research complex (IHU) in Strasbourg to bring researchers and clinicians together in one place. ” The second was from the New York NGO HelpMeSee, which aims to fight cataracts in developing countries by deploying a reliable and inexpensive surgical method on a large scale. “But to operate on patients around the world, 30,000 people will have to be trained and, with this in mind, hyperrealistic simulators will be vital for training future practitioners. ”

When simulation turns up in the operating theatre

Now, in 2018, Stéphane Cotin is leading the MIMESIS project team, working in close collaboration with IHU Strasbourg since its creation in 2014. Besides the development of SOFA, the team is mainly dedicated to real-time simulation in operating theatres. Its flagship projects include the development of 3D models that are to be projected on the livers of patients having a tumour removed, or the development of highly realistic virtual images that would improve interventional radiology techniques by limiting exposure to X-rays.

MIMESIS also addresses the subject of learning through several projects, all supported by SOFA, one of which is the direct result of the collaboration with HelpMeSee. “In 2013, I co-founded the start-up InSimo with Jérémie Allard, Pierre-Jean Bensoussan, Juan Pablo de la Plata and Christian Duriez where I became scientific advisor. ” Supported by funding from the French National Research Agency, the partnership between Mimesis and InSimo has borne fruit as the start-up is in the process of finalising the HelpMeSee simulator, which should soon make its debut in a Chinese pilot training centre. Meanwhile, InSimo has started working on another application related to planning for digestive surgery. This dynamism encourages Stéphane Cotin to consider concrete opportunities for other projects conducted with his team. “I am hoping that two years from now we will be able to set up a clinical study, with our colleagues from Paul Brousse hospital, to provide computer assisted hepatic surgery using our augmented reality techniques. It is always a great recognition when our research leaves the lab to enter the ‘real world’ and be of benefit to patients! But it is also a very important commitment for a small team like ours... I hope that this Inria prize will help to encourage new talent to come and see what is happening in Strasbourg! ” Stéphane Cotin concluded.

After obtaining his PhD in 1998, Stéphane Cotin was the research lead for the Medical Simulation Group at the Center for Integration of Medicine and Innovative Technology (Boston, USA) from 1999 to 2007, where he supervised a team of 15 people. During this time he was also an instructor at Harvard Medical School and a member of the Interventional Radiology Division at Massachusetts General Hospital. Stéphane Cotin joined Inria in 2007 in the Lille research centre, where he created the project team SHACRA, then its extension in Strasbourg in 2012, which became MIMESIS in 2014. Since 2013, he is scientific advisor and co-founder of InSimo.