Date :
22 Jul. 2019
Changed on 08/04/2020
3D printing allows scientists to create metamaterials, i.e. materials whose properties can be configured and graded within the same part. When it comes to using these materials in an industrial context, the possibilities are endless. A collaborative project led by Jonàs Martínez, researcher within the MFX team, a joint undertaking involving Nancy-Grand Est and Loria, resulted in the development of an algorithm capable of generating materials with elastic properties that can be adjusted to suit requirements. The work, which was based around the repetition of patterns defined from star shaped distances, the parameters of which determine the final properties of the material, will be unveiled at the international conference SIGGRAPH 2019. 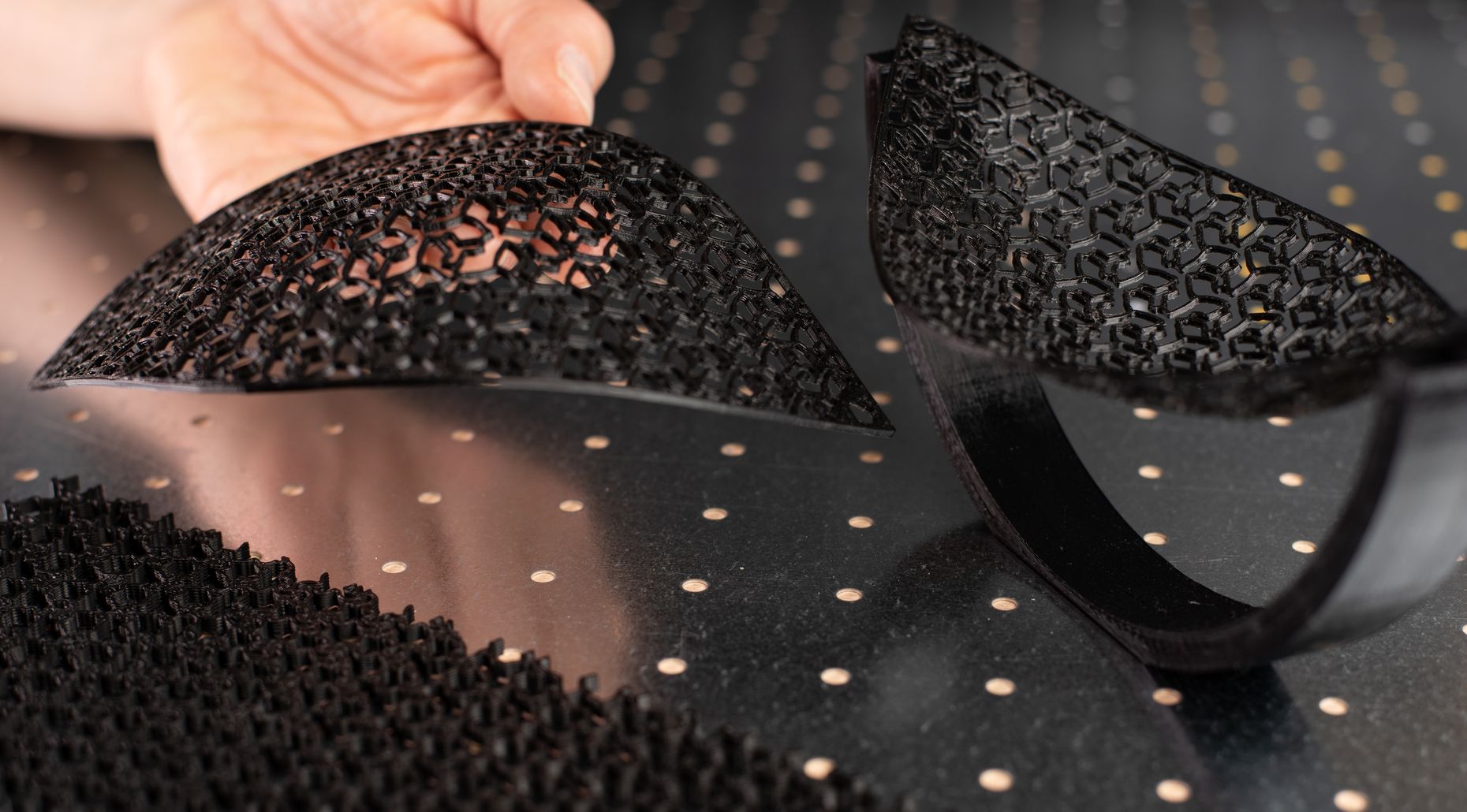 Arriving at a solution to the problem of modelling artificial materials with controlled and variable physical properties in 3D will have significant repercussions on all manufacturing processes: from the soles of shoes to programmable textile deformations, right through to the design of the wheels of vehicles. Researchers from MFX, a joint undertaking involving Inria Nancy-Grand Est and Loria, in collaboration with colleagues from the Inria Grenoble project team Imagine, the ETH in Zurich (Switzerland) and the University of Montreal (Canada), have developed a new geometric method for modelling such materials, paving the way for a wider range of innovative parts.

Moving towards a simplified definition of metamaterials

Metamaterials are typically obtained by repeating a base structure (a pattern) across an entire 3D-printed part. How the part behaves, including whether it is capable of being folded or expanded, for example, will depend on the properties of the base pattern. A part containing one single pattern will exhibit a homogenous “average” behaviour.

Difficulties arise when attempts are made to vary this behaviour within the part. In such cases, it becomes necessary to use a number of different base patterns. The difficulty is that it is not always easy to create a transition from one to another. The boundary of pattern 1 may not correspond to the boundary of pattern 2, which could result in disconnected structures, overly abrupt variations, or even a breakage within the part.

The solution developed by the Inria researchers provides a way of tackling this problem, defining a smooth, fluid transition between patterns. What makes it original is that it provides a compact way of describing a vast variety of complex structures with only a limited amount of data. The same approach enables progressive variations of patterns across space.

The researchers based their work around a tessellation of the plane formed using a set of regularly spaced-out points, with the space subdivided into cells around these points (a Voronoï diagram). Instead of using a “classic” distance which results in cells having a regular shape (hexagons, squares, etc.), they used distances in the form of stars (or “star-shaped metrics”). This makes it possible to obtain cells with variable geometries, and thus a vast array of physical properties, in addition to enabling a more fluid transition between patterns. Indeed, one star-shaped metric can gradually transform into another. Transforming the distances continuously and progressively changes the geometric structure of the cells, without breaking the connection between them. The shape of the cells changes from one location to the next, as does - by ricochet - the elastic properties of the material.

“In order to create these materials with variable structures without an enormous amount of information being required in order to describe them, we had to find a compact, reliable way of modelling the progressive transformation from one cell geometry to another ”, explains Sylvain Lefebvre, Inria researcher director and in charge of the MFX team.“The traditional approach, which involves the use of fixed patterns, is very restrictive: you have to keep within the same family of shapes, given that the pattern geometries must have boundaries that are compatible with each other ”.

A range of possible industrial applications

This method has significant implications for 3D printing and modelling. The researchers remain focused on exploring the possibilities of varying elastic properties, including characterisation within transition zones between two different patterns. By the end, designers of clothes, shoes or braces could all benefit from this technique.

The software will soon be available open access, with anyone keen to do so able to create their own meta-materials and to develop innovative applications.

SIGGRAPH (Special Interest Group on Computer GRAPHics and Interactive Techniques) is a major international computer graphics conference. First launched in 1974, each year it brings together a wide range of people from the worlds of industry, art and science engaged in image synthesis, whether this is for animated films, for creating special effects, for video games or for software programs used for 3D modelling.  The 2018 edition, which was held in Vancouver, was attended by 16,500 people from 88 different countries.

The 45th edition of SIGGRAPH will be held at the Los Angeles Convention Center from 28th July to 1st August. MFX, a joint undertaking involving Inria and Loria, will present three scientific papers at the event. The results put forward concern new algorithms that have been optimised for the 3D designing and printing of curved depositions on standard filament printers, metamaterials based on multi-sided star shapes and anisotropic structure patterns with physical property gradients.

MFX’s work on the modelling of metamaterials using star-shaped polygonal distances will be unveiled at the SIGGRAPH conference at 11.51am on 31st July as part of the “manufacturing” session in room 150/151.