Scientists talk about their profession to Year 11 high school students

Date:
06 Sep. 2022
Changed on 28/09/2022
Operation Chiche! offers the opportunity for Year 11 classes to be visited by a digital scientist to share their profession and their story.
Launched by Inria with multiple partners, this initiative aims to inspire high school students in their career choices. It supports the introduction of new classes in Digital Science and Technology (DST) in the Year 11 core curriculum and the Digital and Computer Science (DCS) specialisation offered in Years 12 and 13. Here are the first reports back at Rennes. 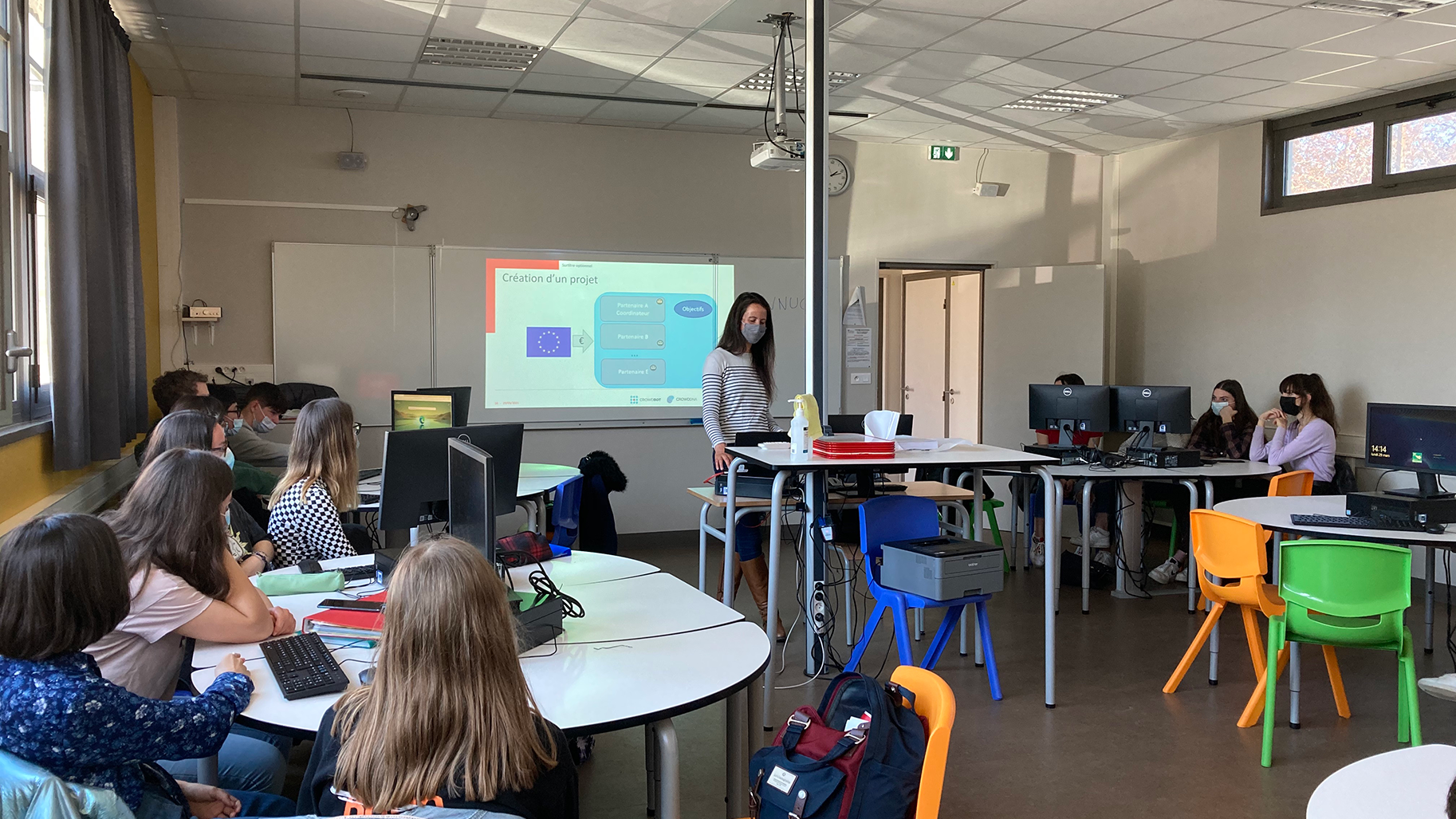 The objective: to transmit to students the desire to work in digital science. Starting point: old clichés die hard. The image of a computer scientist is often a man, and specifically a geek. And as for a scientist, we think of a boffin in a lab coat. To this is added gender stereotypes that push girls away from certain jobs that are supposedly only for boys. Result: they stay away from this sector.

To change perceptions, the idea was born to send scientists into Year 11 classes. To spend an hour discussing their job. Share their story. Demystify things. Show students that these are normal people and that digital science is worth pursuing.

The operation is called Chiche! It functions on a voluntary basis.

Teachers opt in to have a scientist visit their class. And scientists accept to come and share their experience. 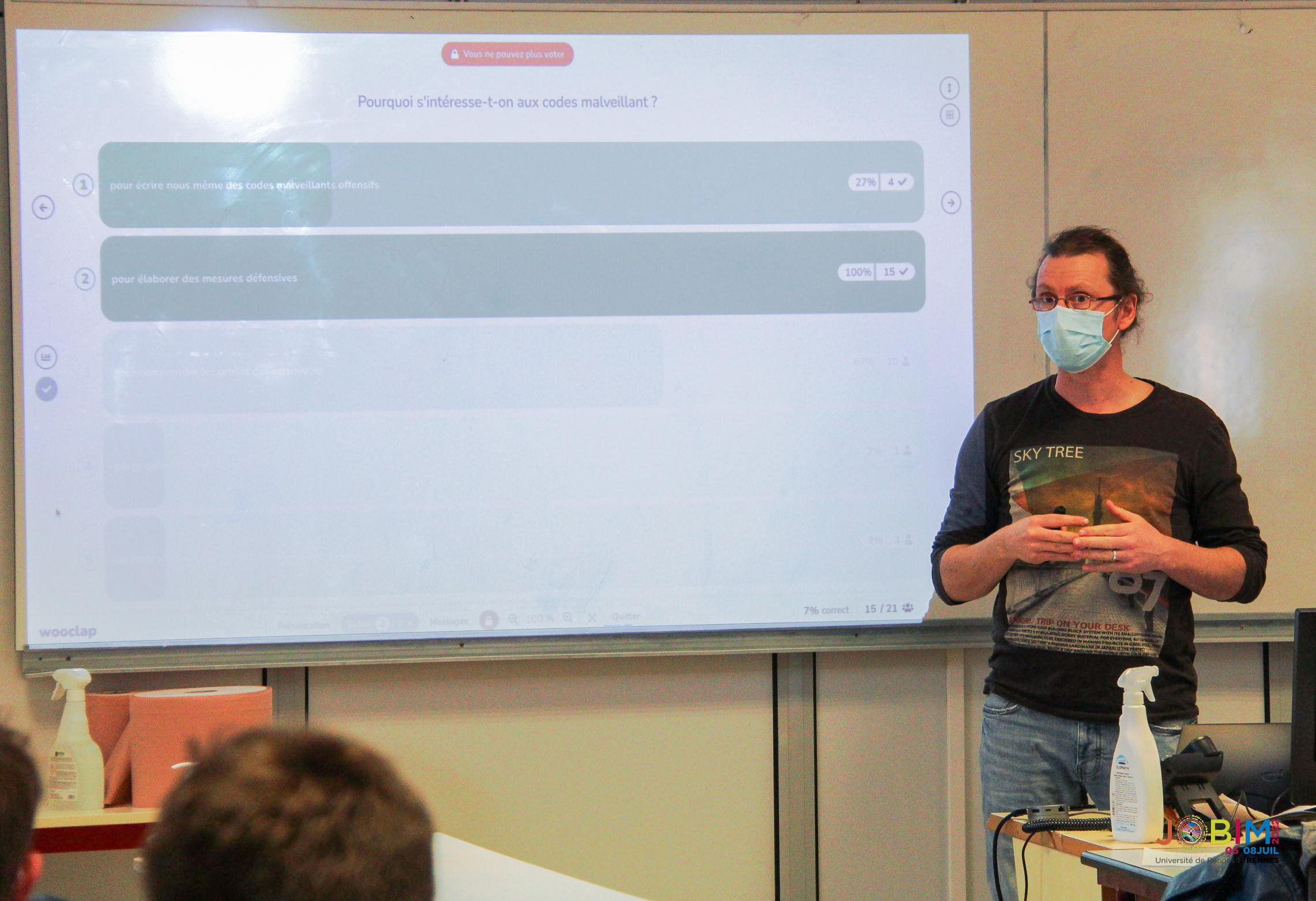 From the beginning, the idea interested the French Ministry for National Education. An initial protocol was signed in late 2019. The experimental phase started in February 2020 but was soon disrupted by Covid-19 and repeated lockdowns. Depending on the circumstances, « interventions started to take place mainly in areas where there is an Inria centre » explains Laurence Hermant, national project manager of the operation. « In parallel, Fondation Blaise Pascal and the CNRS positioned themselves in areas where there are no sites. They activated their network to find digital scientists who were interested and available to visit classes. »

To organise this initial phase, two complementary approaches were used. « The first part on the ground. For years, our centres have been very active in scientific outreach. They have a pool of volunteer scientists. They have built relationships with establishments and teacher contacts.

They capitalise on these existing relationships. The second involves the Ministry for National Education mobilising regional education authorities via Digital Academic Delegates (DAD). This is how establishments are invited to request Chiche! sessions. »

A network of partners

Scaling up this programme will also involve the creation of a new structure led by the founding members, including the Ministry for National Education and Youth,  France Universités and Inria. « Around this core group, a number of partners will be mobilised, including Fondation Blaise Pascal, la Fondation Inria, CNRS (mainly INS2I), Conference of Deans of French Schools of Engineering (CDEFI), CEA, 'association Femmes et sciences, French IT Society (SIF) and the not-for-profit Class'Code, Some members of the group essentially play the role of an intermediary to mobilise their network. Others are more directly involved in supporting the volunteer scientists. The two foundations serve more to help us find financial resources. These are needed to cover the costs of transport, communication and training scientists. We also needed an internet tool to automate the process of putting teachers and scientists in relation, etc. »

Despite the pandemic, there have been more than 220 interventions performed in classrooms. The pilot phase also provided the opportunity to gather feedback through questionnaires.

90% of participants responded that it was a positive experience. The high school students said that the visit changed their perception of digital sciences. Teachers found that it fitted in well to the DST curriculum. And a good proportion of scientists are interested in doing it again.

Solenne Fortun: “I create a bond with the students”

The first scientist from the Inria Rennes Centre to perform Chiche! sessions, Solenne Fortun, has also probably done the most.

« At Bain-de-Bretagne, the high school is very big. They offered me an amphitheatre. I explained that that wasn’t at all the idea. I prefer to visit class by class. Twelve in two days! A bit much? Yes, but I have a real passion for this work. When I was younger, I gave science workshops at summer camps. Chiche! also allows me to talk about what I do. I manage CrowdDNA, a European project that models crowd movements. » 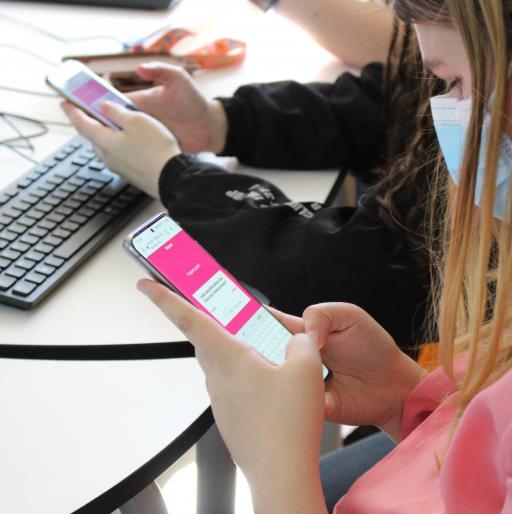 « So I start with that. I show students a video of the crowd crush at a Travis Scott concert last year. They know about this tragedy. They saw the videos on TikTok. I start with this issue. Then I move towards my research. But no maths! »

Another part involves inviting students to... turn on their phones!

« They can react and contribute to a cloud of keywords on the projector. It’s an icebreaker. I create interaction. I also show them that I trust them. The projector also displays other surprises. I went back through my archives. I bring out photos of myself. I show students that I am not just a scientist. I have a life too, like everyone else. I play sport. I go horseriding. I travel. My work is not my entire life. By showing them a more personal side, I create a bond with the students.

As a result, the questions abound. The boldest is how much do you earn? I answer. I tell them my salary. But I specify that with these qualifications, you can be far better paid in other sectors. So, they’re forewarned. I add that it’s good to have a job where, every morning, you’re happy to go to work. I also explain to them that I don’t know what I will be doing in 10 years. Then, I talk about my experience, my surprises in the professional world. I convey certain messages. For example? English! I was very bad at it at school. If you had told me that one day, I would be able to work in this language, I would never have believed it. And yet, now, that’s the case. So you can’t let something like that stop you. Even if you make mistakes or if you don’t have a British accent, you can make yourself understood. I’ve met famous scientists who had the thickest accent you can imagine. It doesn’t prevent them from doing their work. »

To deconstruct clichés, « the scientist considers every detail. I dress in a feminine way. I don’t come in a hoodie and trainers. You can work in digital technology without being a ‘geekette’ and spending your evenings playing video games. What’s more, I’m almost never in front of a computer screen outside of work hours.

What is the impact of these interventions? Huge. It brings a lot to students. It opens a new window to them. A teacher said to me, an hour of Chiche! is worth ten hours of typical class. »

Back on Chiche experience

Image processing specialist Thomas Maugey is also one of the reference researchers for scientific outreach missions at the Inria Rennes Centre.

« I volunteered for Chiche! because it interested me, but also to set an example. My colleagues and I benefited from training provided by Claude Vadel to learn to speak to high school students. And the training really changed me! As scientists, we have certain ways of communicating related to how we work: presentations, powerpoints, trying to be exhaustive, and so on. You might be tempted to do that again here. But the trainer deconstructs these habits. He offers a method based on anecdotes.

Imagine you’re at a party. You meet someone whose work involves preparing astronauts for the European Space Agency. You ask him to tell you about his job, and they bring out... a powerpoint. You’re disappointed. What you want is for him to tell you what it’s like: one day, I saw an astronaut do such-and-such... That’s what you have to share with students.

During the training, we practised this. So we already had 80% of the content and no risk of boring the listeners. We prepare 15 to 20 minutes of presentation and plan for the rest to come from questions asked by students. So you cross your fingers for there to be discussion afterwards. Otherwise it will be very long. That’s the scariest part. But if your anecdotes are good, they spark conversation. They provoke questions. The maths teacher told me that the students asked questions about my journey, but, in the end, they were a lot more interested in my stories about research. »

Loïc Hélouët has been to high schools in Lorient and Landerneau.

« My main motivation? Speaking about my career, says the distributed systems specialist. In the past, I had already been contacted by an establishment. In the end, it didn’t happen. Not enough students interested. It was a bit annoying. Even more so since I had already prepared my speech. So the Chiche! operation offered me a new opportunity to present a career that I thought was little-known. But actually, I was wrong... I was very surprised by how much the students knew about it. They were well-informed. I was pleasantly surprised by the maturity of the students in front of me.

Did some of them show a desire to become a researcher? Not many. For a reason that shows how important Chiche! is: students think that it is too hard. That this career is inaccessible. The idea of doing eight years of study scares them off. Not to mention the competitive exams to be an academic. The selection rate is one in thirty. So that scares them too. One student said to me, it’s impossible!” How can you respond? “That certainly, it’s a difficult objective to achieve. But there are a lot of jobs in digital technology. So even if they do not succeed in working in academia, they will still have an exciting career. And they’re not plan Bs, nor dead-end jobs. So it’s not a risky career choice. He adds a confession: I myself just went with my passion. I didn’t plan anything. If I had asked myself too many questions, I would never have done anything. »

On the topic of gender stereotypes, Loïc Hélouët mentions something else: « out of the ten scientists I admire the most in my field, more than half are women. We have extremely talented female researchers. During the lunch break, one student came to him for a private discussion. She didn’t want to say it front of everyone, but she was interested in this profession. Sometimes it’s in one-on-one conversations that you can best pass on information. In any case, the students took something away from it. At the school in Lorient, the students rated the Chiche! session among the most interesting activities of the year. »