Sanctuary: leaving a mark on the Moon to celebrate the fiftieth anniversary of the Apollo 11 mission

Date:
18 Mar. 2019
Changed on 03/01/2020
The goal of the Sanctuary project, which involves scientists from Inria, the CEA and the CNRS, is to take a collection of works and knowledge engraved on sapphire discs to the Moon. 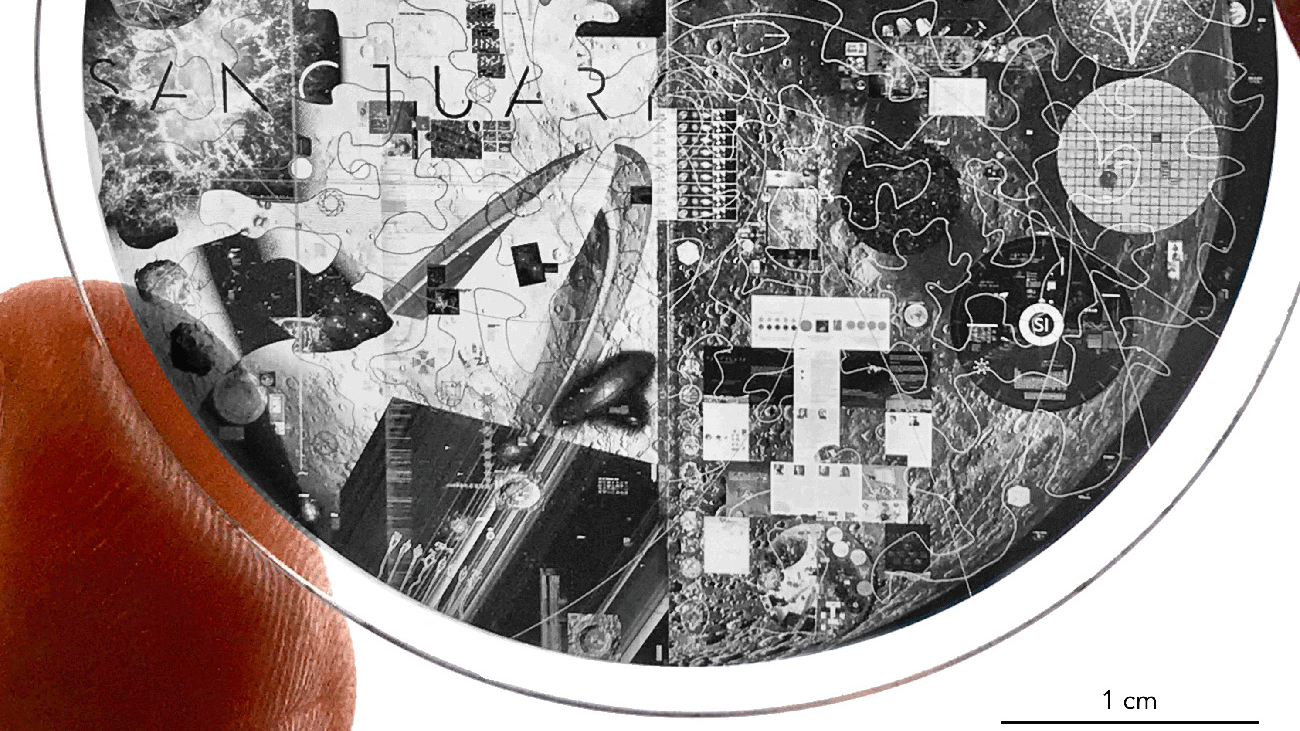 "To leave a testimony of what makes humanity"

To leave a capsule on the Moon bearing witness to mankind’s scientific and artistic accomplishments fifty years after humans first walked on its surface: this is the concept behind the Sanctuary project , created by the versatile documentary-maker and engineer Benoit Faiveley. Faiveley surrounded himself with a team of highly-skilled scientists for the project , including the astrophysicist Roland Lehoucq from the CEA, the cosmologist Jean-Philippe Uzan from the CNRS and Inria researcher Emmanuel Pietriga, with the concept behind it as powerful as it is poetic: “to leave behind evidence of what makes humanity, here and now, primarily for ourselves, but also for future civilisations, and possibly for any intelligent life that might be out there in the universe” , explains Roland Lehoucq.

The Sanctuary project involves a collection of 11 sapphire disks, 90mm in diameter, containing a range of drawings and human creations . This information will be engraved using a cutting-edge printing method known as microlithography, with a resolution of one micrometre and a total of roughly 3 billion pixels per disc! These discs will then be left on the Moon in early 2020, carried there by the Alina lunar lander sent by the private German consortium PTscientists. “The launch was initially scheduled for July 2019 to mark the fiftieth anniversary of the Apollo 11 mission, but we had to adjust our schedule to fit with PTscientists’ diary” , explains Roland Lehoucq.

Among the information to be sent into space, five of the discs will contain two fully decoded human genomes - a man and a woman. “The others will carry a compilation of the knowledge produced by mankind, from astrophysics to biology, but this is not intended to be exhaustive. It’s not an encyclopaedia!” explains Emmanuel Pietriga. This senior Inria researcher, a specialist in the interactive visualisation of large quantities of data , was involved in designing control rooms for giant telescopes such as Alma. Within the context of the Sanctuary project, Pietriga was responsible for designing some of the visuals embedded into these discs.

The most universal representations possible

“The challenge for us was to find a way of representing complex information in a simple and intelligible way, while ensuring we were able to cover as much knowledge as possible within a limited space. Emmanuel was exactly the man we needed for this mission”, recalls Jean-Philippe Uzan. The researchers were also keen to make the representation as universal as possible . “Initially, the idea was to avoid using text as much as we possibly could, as we can't be sure that distant or future civilisations would be able to read them. Instead, we decided to mainly use visuals. To represent the space missions, we used a diagram showing the different trajectories taken, without any text but including the dates, which are encoded using the positions of the planets. You can work out the dates provided you know the movements of the stars” , explains Emmanuel Pietriga.

Pietriga had to make do with the limitations of the microlithography printing method, which is only capable of engraving pixels in black and white. “The problem is that some visual representations require the use of shades of grey. We use a technique called ‘dithering’, which involves alternating between black and white in order to recreate contrasts”, adds Emmanuel Pietriga, who developed a computer program to partly automate the process of formatting the information.

Lastly, in order to represent the juxtaposition of the content represented on a disc , Inria allowed the Sanctuary team to use the Wilder data visualisation platform. This comprises a 6 x 2m wall with very high pixel density - between 60 and 100 pixels per inch - that can be used to display very high-resolution scientific images. “This device was enormously helpful when it came to verifying the consistency of what we were doing. Even though there is a limited amount of space on the surface of the discs, the very fine nature of the engraving means it is possible to include an incredibly high number of pixels, so many that it is impossible to view them all with the naked eye or using a microscope” , explains Roland Lehoucq

The Sanctuary team makes no claim to be pioneers, however, as they follow in the footsteps of other projects which aimed to leave a trace of mankind in space , such as the Golden Record. This project, carried onboard the Voyager probes launched in 1977, brought together a collection of images and sounds on a gold disc. The quantity of information to be transported as part of the Sanctuary project is incomparably higher, owing to the technological advances made in the intervening period, but the members of the team are also keen for their project to stand out through its original ambition: “In addition to carefully selected scientific knowledge, we have added human creations such as children’s drawings, thousands of selfies showing a diverse range of faces, etc. Taken together, this presents an image of life and ourselves as humans, and we are inclined to regard Sanctuary as a work of art” , concludes Jean-Philippe Uzan.