Date:
10 Dec. 2019
Changed on 06/05/2020
Studied by many neuroscientists, brain-computer interfaces or BCI are paving the way for real progress in rehabilitation for victims of strokes. However, these interfaces are still struggling to interpret the signals emitted by the brain and to detect the gestures being imagined by patients. Fabrizio De Vico Fallani, a member of the joint project team Aramis (Inria, CNRS,INSERM, the Sorbonne University), based at the ICM, has just been awarded an ERC grant of 2 million euros to carry out extensive research on the subject over five years. 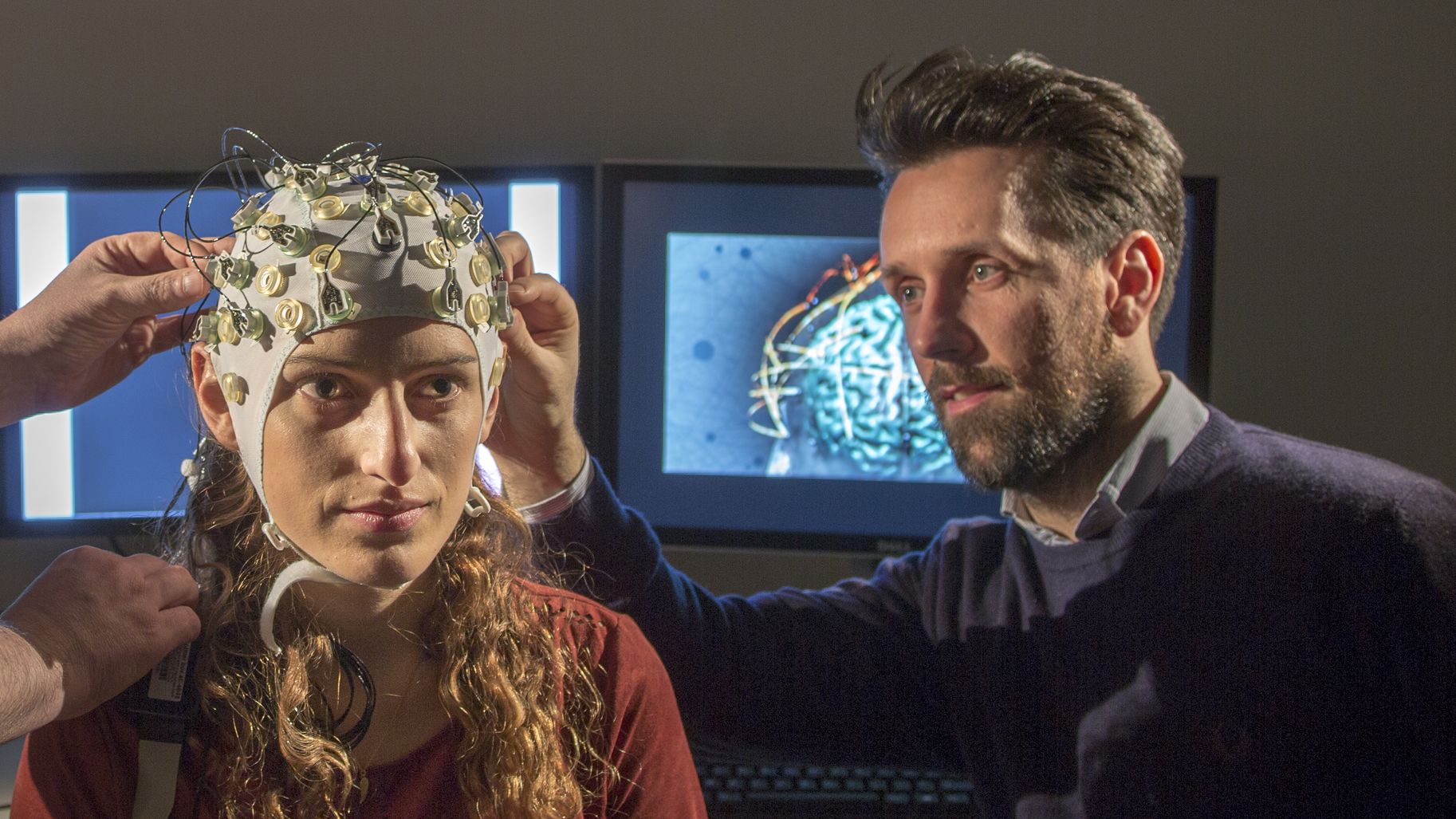 It was Fabrizio De Vico Fallani’s radical approach to the subject that saw him awarded this ERC Consolidator Grant for brain-machine interfaces or BCI. This Inria researcher, who specialises in bioengineering and biophysics, earned his stripes within the Aramis project team, who work day in, day out with neuroscientists and doctors. He was previously awarded a prize by the Complex Systems society in 2018 as recognition for his interdisciplinary work on brain modelling. This EU grant will now enable him to step things up a gear, allowing him to recruit nine individuals over five years.

Getting closer to patients

The Aramis project team, which Fabrizio De Vico Fallani is a part of, is a joint undertaking involving the CNRS, the Inserm and Pierre and Marie Curie University. The team is hosted by the Institut du Cerveau et de la Moelle épinière (ICM - the Institute for the Brain and the Spinal Cord), an innovative neuroscience research body.  Based at Pitié-Salpêtrière Hospital in Paris, France’s leading neurology facility, the ICM brings together 700 researchers and doctors, helping them to get closer to patients.

Capturing the “cortical signature” of gestures imagined by patients

In order to understand research into BCI, technology combining electronics and computer science, it is essential to bear in mind a phenomenon that is well-known to specialists in neuroscience: our brain is capable of generating the same electrical signals and the same “cortical signature” when we are imagining a movement (picking up a glass, taking a step forward, etc.) as when we are actually performing it.

What this means is that a patient whose hand has been paralysed following a stroke will continue to “think” the movements of their hand as they did before their stroke. The challenge for BCIs is to capture this cortical signature and to interpret it correctly in order to activate an external system capable of helping the patient to carry out the task.

The possibilities are huge, whether it's for helping with daily tasks or for rehabilitation. Indeed, regular training in these movements controlled by a BCI has been found to promote neuroplasticity, i.e. the reorganisation of neural circuits, which have to compensate for the regions damaged as a result of the stroke in order to re-establish communication with the muscles. If everything goes according to plan in terms of their rehabilitation, the patient should be able to recover their faculties.

That's a big if however, and it doesn’t look as though BCIs will be leaving the laboratory any time soon. The issue here is that, across the globe, BCIs still find it difficult to interpret the brain signals that they record. According to the experiments, carried out thus far on healthy patients, 40% are unable to obtain the gesture being imagined at least 7 times out of 10. As such, it is impossible to imagine this being used by hundreds of thousands of people (see box). BCIs must get better at understanding patient’s intentions.

Neurological sequelae for 50% of stroke victims

Fabrizio De Vico Fallani’s work is in response to an acute public health concern, and one that is on the rise. 140,000 people fall victim to strokes each year in France, with 20% dying within twelve months, and nearly 50% retaining neurological sequelae: a loss of autonomy, disability, motor deficits, language issues, sensory or visual issues, etc. And this doesn’t just affect older patients: a quarter of stroke patients are under the age of 65. Among those victims under the age of 45, 30% are forced into early retirement, while 10% remain fully dependent.

Despite government prevention policies, these figures look set to get worse over the next few years as the population ages, leading to an increase in the number of strokes and their severity.

Modelling the brain as a complex network

The last ten years have seen very little progress, because we’ve been asking the wrong questions”, believes Fabrizio. “We saw the brain as a juxtaposition of regions emitting simple, independent signals".

But there are a whole host of interactions between the different regions of the brain. What’s more, they exchange with each other over a number of frequency bands. In order to convey this and to understand a patient’s intention, we need to be able to detect and interpret many more signals.

But what signals? In order to find out, the researcher will use mathematical tools currently used by the Aramis team. Drawing on network science in particular, he intends to study the brain as a highly complex network made up of nodes (the different regions) and connections (the way in which the regions interact with each other), and thus to analyse how the brain works: how are connections distributed within the network? Which nodes are most important? How many nodes can communications pass through and over what distance? Are there “patterns”, i.e. sub-assemblies of nodes whose structures are repeated? “The more progress we make in understanding these connectivity mechanisms, the better we will get at identifying which brain signals are relevant for BCIs”.

Avoiding the cost and trauma of surgery

One additional difficulty is that this complex network is also always changing. The way in which it is structured varies from one patient to the next, and even within the same patient, depending on whether they are at rest or imagining a movement. It also varies depending on the type of movement, and varies further as a result of the neuroplasticity discussed above, given that a new brain-muscle communication is being created.

Because of this, future BCIs must be able to combine both precision and adaptability. Fabrizio uses non-invasive sensors positioned on subjects’ skulls using a helmet as opposed to being implanted into the cerebral cortex.

We lose out in terms of the quality of the signals, but we avoid the prohibitive cost of surgery, which many patients find frightening.

The researcher has circled one objective on the road map: to boost the performance of intracranial stimulation. This non-invasive technique, which has now been tested in a laboratory setting, involves sending magnetic waves to certain regions of the brain in order to promote neuroplasticity. It remains empirical, however, with the correct stimulation protocol determined through trial and error.

For each patient, I am hoping to successfully identify the regions of the brain that have the most influence on the others. Intracranial stimulation could then be targeted at these regions, which would make BCI training sessions more effective.

The project is funded by the European Research Council (ERC) under the Horizon 2020 program.