Date :
15 Sep. 2019
Changed on 31/01/2020
Waking up from general anaesthesia during surgery is a rare, although potentially deeply traumatising experience. Currently no system can reliably predict these intraoperative awakenings, but the Neurosys research team is developing a promising technology to remedy this situation, based on the observation of the neuronal activity in the motor cortex. Awake patients want to move, and it shows in their neurones ! 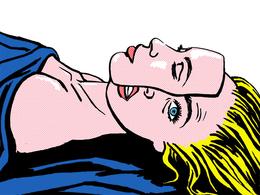 Between 0.1 and 0.2% of patients experience intraoperative awakening, meaning that they wake up while the operation is ongoing. If we extrapolate to the millions of general anaesthesia performed worldwide each year, this situations affects a significant number of people.

“In France alone, between 25 and 50 patients experience intraoperative awakening every day”, calculated Laurent Bougrain, head of Neurosys, a joint Inria/Loria research team. “Some groups are at higher risk than others: patients with a poor health, or elderly individuals with cardiac problems, for example, are given lower doses of anesthetic drugs.” In such situations, the probability of the patient waking up during surgery is 10 times higher than normally.

These awakenings do not represent a physical risk for the patient: he/she would have also been injected with curare, a type of muscle relaxant preventing him/her from moving. However, the psychological trauma caused by waking up in the operating room, and hearing conversations and the noise of instruments without being able to do anything can be severe, with potential long-term effect. And this doesn’t just impact patients: hospitals run the risk of costly legal actions, while anaesthesiologists are powerless given their inability to anticipate or detect the situation. The Neurosys team, specialised in human-computer interaction, teamed up with the anaesthesiology department at Brabois University Hospital in Nancy to develop a reliable tool to predict these awakenings.

Intention - it’s all in the cortex

Currently, the monitoring of physical constants, such as the temperature or the heart rate, are used to make sure that the patient is unconscious during surgery. There is nothing, however, to indicate that he/she is about to wake up! “The Bispectral Index (BIS) that detects changes in the brain’s activity via electrodes on the patient’s forehead, is more and more common,”, continues Laurent Bougrain. “But it remains insufficient.”

Laurent Bougrain is an expert in brain-computer interfaces (BCI) and in the activity of the neurons from the motor cortex. With his team, he naturally began to investigate the changes that intraoperative awakening produce in the brain and how these could be detected with a computer. More specifically, he focuses on the intention to wake up and the desire to move that derives from it.

“We already know how to detect the intention to move using electroencephalography (EEG) on conscious subjects”, explains Sébastien Rimbert, a PhD student within the Neurosys team, who did part of his PhD project on intraoperative awakenings. “However, we had to assess the impact of the anaesthetic drug on the brain’s activity to determine whether or not our prediction system was also compatible with subjects under anaesthesia.”

Propofol - no effect on neurons

The scientists from Neurosys collaborated with Brabois University Hospital to design a study where 30 volunteers were given gradually increasing doses of Propofol, a short-acting anaesthetic drug, outside of a surgery setting. They then observed the volunteers’ EEG while they were asked to move for real, compared to when they were instructed to just think about a movement.  The results showed the same pattern of neuronal activity in patients with and without propofol, when they were only thinking about a movement. “This opens up the possibility of using brain-computer interface based on the analysis of the motor to better detect intraoperative awakenings”, explains Sébastien Rimbert.

The researchers still need to overcome the issue of the “false positives”, when the machine detects an awakening although the patient is still unconscious. “When we ask the volunteers to think about a movement, we know at what point the interface should detect a change in the activity of the motor neurons”, explains Sébastien Rimbert. “In real-life,  however, it will not know when the patient will wake up. If the interface analyses the brain’s activity non-stop, there is a risk of generating false positives.”

Tuning in with the median nerve

The researchers are tackling this issue with the help of the median nerve. When subjected to a light stimulation, the median nerve generates a change in the brain activity that can be observed using EEG; but this change disappears when the brain thinks about a movement. “By stimulating the median nerve every 3 or 4 seconds so that the brain-computer interface would only have to detect the disappearance of this related change in brain activity, we could eliminate the risk of false positives”, explains Sébastien Rimbert.

The first results are encouraging, also when propofol is used, but research is still ongoing. Should this prove conclusive, the researchers will need to further lighten the device so it becomes practical in the context of a surgery. It currently requires a total of 128 electrodes to be stuck to the patients’ skulls; “our long-term goal is to identify which electrodes we actually need to detect modulations in the activity of the motor cortex”, explains Laurent Bougrain. “We will then look into adapting our algorithm to develop a reliable system to predict interoperative awakenings”.