Poems and Naval Group: working together to model underwater explosions

Date:
04 Jun. 2021
Changed on 21/07/2021
Ten years of research by the Poems project team have led to the development of a solver capable of modelling and simulating propagation of mechanical waves. Thanks to a hugely successful Cifre PhD, this solver - Coffee - now performs a vital role in the defence sector, used on submarines to simulate the effect of acoustic waves from far-field underwater explosions. Read on to find out the whole story. 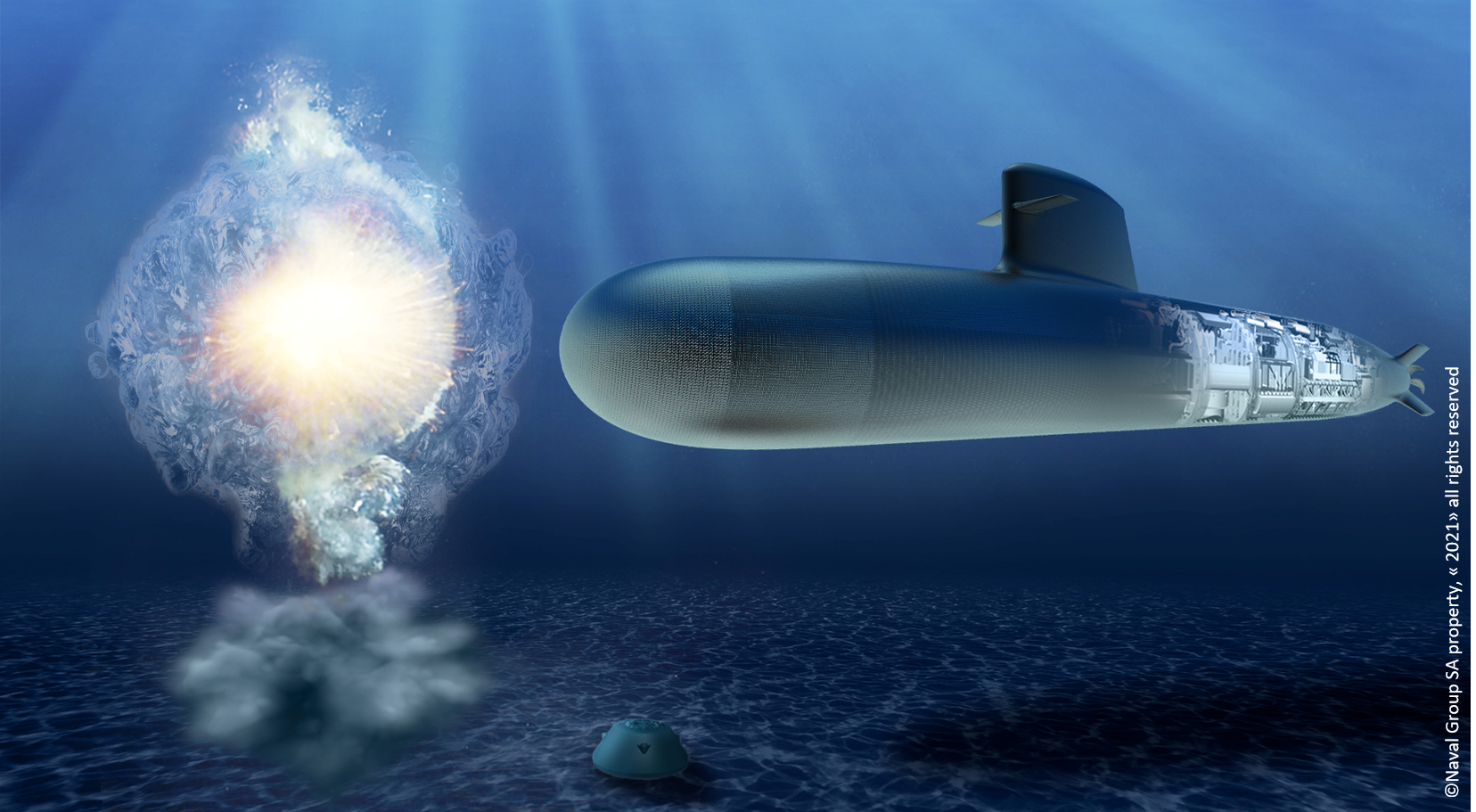 Where it all began: an industrial problem

Damien Mavaleix-Marchessoux owes the success of his Cifre PhD (Convention industrielle de formation par la recherche - Industrial agreements for training through research) to three encounters. It all started with an industrial problem faced by Naval Group, a company which specialises in the design and maintenance of submarines and surface vessels. “For defence purposes, we needed to be able to properly model the effects of underwater explosions on vessels and their equipment”, explains Bruno Leblé, a research engineer with Naval Group. “But there was only one software program in the world capable of doing this, and it was developed in the 1970s. As a result, it hadn't benefited from any of the algorithmic breakthroughs made since then.”

On the other side were Stéphanie Chaillat-Loseille and Marc Bonnet, researchers with the project team Poems (Propagation des Ondes: Étude Mathématique et Simulation - Wave Propagation: Mathematical Analysis and Simulation), a joint undertaking involving Inria, ENSTA Paris and the CNRS. The work they carried out together related to the boundary element method. “This is a digital method used to simulate physical phenomena, such as wave propagation”, explains Stéphanie Chaillat-Loseille. “It has the advantage of being based entirely on discretization of the boundary of the object you are studying. In the case of Naval Group's problem, this was the boundary between the submarine and the water. What this meant was that unlike with the finite element method, there was no need to map out the entire ocean.” This method works when the domain of propagation is quite simple, with homogeneous properties, as is the case with water.

As Poems and Naval Group began their collaboration, they were still missing one key element: the PhD who would be responsible for adapting the academic research carried out by the former to the industrial needs of the latter. The person chosen for this role was Damien Mavaleix-Marchessoux, then a student at ENSTA Paris who was “recruited” by Stéphanie Chaillat-Loseille to take part in the project. As he recalls, “I was won over by the subject and the fact that there was to be a six-month placement before the PhD, giving me the opportunity to find out more about it in advance.”

But the challenge set by Naval Group was substantial: “I set the bar very high, giving them only three years to come up with a high-performance computing code that was ready for industrial use, without weakening any of the mathematical formulations by making approximations”, explains Bruno Leblé.  With the support of his three supervisors, Damien Mavaleix-Marchessoux set to work. During his placement, he began by identifying the limits of the existing software. “One limit was the number of elements the code was able to factor in”, he explains. “On a 130 metre long submarine, if your grid is divided up into 50 mm squares, then you will soon end up with an incredible number of elements in your equation.” But the good news was that Stéphanie Chaillat-Loseille had just developed a computer code named Coffee which was capable of factoring in millions of elements. “This was initially used to simulate mechanical waves, such as seismic waves”, explains Stéphanie Chaillat-Loseille. “But for years we had also been using it for the simpler case of simulating acoustic waves.” Like the ones you get with underwater explosions...

I set the bar very high, giving them only three years to come up with a high-performance computing code that was ready for industrial use, without weakening any of the mathematical formulations by making approximations, explains Bruno Leblé

Damien Mavaleix-Marchessoux’s PhD research involved using Coffee while accelerating the computation. “We developed a new method that would filter out irrelevant information. So, instead of submitting 10,000 problems to the solver, I would only give it around thirty or so, which would be those ones that contained useful information”, explains Damien Mavaleix-Marchessoux. “Then, while still using this method, which is based on a high frequency approximation established empirically, I was able to find the information from the 9,970 remaining problems”. This solution made it possible to carry out a lot of calculations very quickly and precisely.

We developed a new method that would filter out irrelevant information. So, instead of submitting 10,000 problems to the solver, I would only give it around thirty or so, which would be those ones that contained useful information, explains Damien Mavaleix-Marchessoux.

As a cherry on the cake, Damien tasked himself with coding the solution in order for it to be easily usable in industry. “It's extremely rewarding to see 10 years of academic research carried out in the lab become an industrial application over the course of a PhD”, observes Stéphanie Chaillat-Loseille.

It's extremely rewarding to see 10 years of academic research carried out in the lab become an industrial application over the course of a PhD, observes Stéphanie Chaillat-Loseille

Naval Group shared the same satisfaction: “Tackling this challenge in only three years was an incredible achievement, and is down to the groundwork laid by Stéphanie and the excellent work carried out by Damien”, says a happy Bruno Leblé. The software is now operational, capable of modelling the effects of underwater explosions on the structure of all types of submarine. Work to compare level 1 test results will begin this year in order to ensure that the simulations generated by the software are an accurate reflection of reality. If this is the case, then in the future they can be factored in when designing submarines.

As for Damien Mavaleix-Marchessoux, after completing his PhD on 10 December 2020 he was recruited by Naval Group, where he now uses methods from applied mathematics in other fields: target tracking and artificial intelligence. “My work chiefly involves studying the environment around vessels, checking to make sure there are no threats. We develop algorithms capable of analysing these environments and providing decision-support.”

A second PhD in the pipeline

Naval Group and Poems don't intend to stop there. After the success of this first collaboration, the two partners are offering a second PhD, picking up from where Damien Mavaleix-Marchessoux left off. “The first PhD dealt with the problem of submarines without surface and depth effects”, explains Bruno Leblé. “But the environment is slightly different for surface vessels, and what we want to do is to continue Damien's research in order to improve performance and to apply it to more complex cases.”

As Stéphanie Chaillat-Loseille adds: “Now that we have proved that the computation sequence works on the simplest cases, we can start looking at more complex physics. Further proof of the utility of this research is that the DGA - the French Government Defence procurement and technology agency - has joined us in funding this second PhD. The applications of our research extend far beyond Naval Group.”