Date:
06 Apr. 2018
Changed on 30/03/2020
The new Inria Nancy centre research team, MOCQUA, explores emerging computational models such as infinite precision dynamical systems, higher-order computation and quantum computing. The team’s leader, Emmanuel Jeandel, met with us to explain more about the work of his team, which is made up of nine permanent researchers, a post-doctoral researcher and two PhD students. 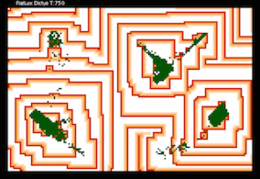 What are the scientific questions the team is asking?

We are studying computational models that differentiate themselves from the 'traditional' ways of working in computer science.  There are, in fact, many other ways of performing calculations than those used in our computers today.

Some of these models have existed for a long time, others are more recent. However, their common feature is wanting to go beyond the 'classic' structure of the algorithms we use on a daily basis.

Dynamical systems are a leading mathematical tool in the study of these models: they are used to predict the evolution of physical systems. It may be a question, for example, of calculating the position of the planets in the solar system, or closer to us, to predict what the weather will be like during the week.

As their name indicates, dynamical systems seek to understand long-term temporal evolution, which can be done with a description of the elements with a finite or infinite piece of information.   We have been aware, since the beginning of the 20th century, that it is not because we know, with accuracy, the behaviour of each of the components of the system that we can necessarily predict how it will evolve as a whole. This is the type of question that is of particular interest to Nazim Fatès, who is devoting his research to a type of system called cellular automata, where the components have discrete states, or Emmanuel Hainry, who is working with continuous-state systems.

Programming languages with higher-order functions, i.e. functions whose variables themselves refer to functions, are also part of the team's research, since the study of their properties and their complexity is not limited to the study of finite behaviours.

Your team is also carrying out research on quantum computing. Can you tell us something about it?

What we need to understand is that a quantum computer does not work like a traditional computer at all. In traditional computing, the information is coded using bits, i.e. with 0s and 1s, on microprocessors. In quantum computing, a piece of information will be carried by a quantum bit, or qubit, and will be physically coded by the state of one or several elementary particles.

The properties of quantum computers seek to overcome the physical constraints of traditional processors in order to provide a computing power which, in certain cases, is increased.

What precisely are the aspects studied by the team?

The main interest of quantum computing is to access completely new calculation possibilities. However, as it is not yet possible to have infinite precision, the system that will carry the information will be subject to errors.

We are therefore looking to understand how we can guarantee that it will be capable of correctly running the programs we need. The team is in discussions with physicists in order to find out how such devices can be best used.

We are using digital simulation to develop suitable programming tools. We are also asking ourselves what the rules enabling the optimisation of these programming languages will be. This will enable us to go beyond the current limits of the computers.

Who is working on this research with you?

We are partnering on projects with ATOS, who currently has an infrastructure enabling the simulation of a quantum computer. We are working with them on the best way to prepare the quantum transition, in particular with regard to programming languages.

Two of our projects have been accepted by ANR, the French National Research Agency:

And we are also taking part in a PIA-GDN/Quantex project.

What are the challenges of your research?

As far as quantum computing is concerned, there are significant challenges; however, it is a field that is still in its early stages. Several technologies exist in quantum computing, but we do not yet know which one will be adopted.

The opportunities available, especially concerning security, cryptology and computing power, are so enormous that all of Europe is taking an interest in this technology.

Is the quantum computer just around the corner?

Even if there are already some 'quantum' computers on the market, these machines are not yet capable of performing all of the operations we expect from a computer.

At present, existing machines are similar to those created at the beginning of the nineteenth century, when computer science was just starting out, including with regard to the space they occupy (several square metres).  In addition, their operation requires them to be maintained at a temperature close to absolute zero. Numerous technical and scientific challenges still remain and, at the present time, we cannot yet say if - one day - we will all be using quantum computers in the same way we use PCs.

MOCQUA come from the former CARTE team, and is part of the Algorithmic, programming, software and architectures research theme. The team name refers to both computational models (Moc : Models of Computation) and quantum computing (Qua). Moc Qua also means, in Vietnamese (Mộc qua), the quince