Date:
28 Jun. 2018
Publish on 23/01/2020
Every year, the Inria Saclay - Île-de-France centre supports the Mathematical Olympiads by participating in the organisation of the award ceremonies for the Créteil and Versailles regional education authorities. This mathematics competition aims to encourage the emergence of a new scientific culture and stimulate initiative and a taste for mathematics and research among Year 12 students (all streams combined).

Some spoilt winners at the awards ceremonies

For this 2018 edition, the two ceremonies took place on the same day - Wednesday 30 May.Almost a hundred studentsfrom schools from both regional education authorities were recognised by Inria and all of the partners of the Mathematical Olympiads,including Casio, Crédit Mutuel Enseignant, École polytechnique , Google, Hewlett Packard, Texas Instruments and Wolfram.

In Créteil, under the watchful eye of the winning students and their families, Eliane Bécache - a member of the Poems team - gave a conference on the history and advances of mathematics.

In Versailles, the prizewinners and their families attended a conference given by Jean-Louis Brahem, an architect who is passionate about mathematics and more specifically geometry - a discipline he has taught at ENSAP, the Lille graduate school in architecture and planning.  Author of the book “Voyage en géométrie, la 3D sac au dos”, Jean-Louis Brahem carried out some demonstrations of 3D drawings and captivated his audience by starting from this simple question: “Why does the photocopier that enlarges an A4 plan to A3 multiply the surfaces by 2 and the lengths by √2?”.

Each to their own method… 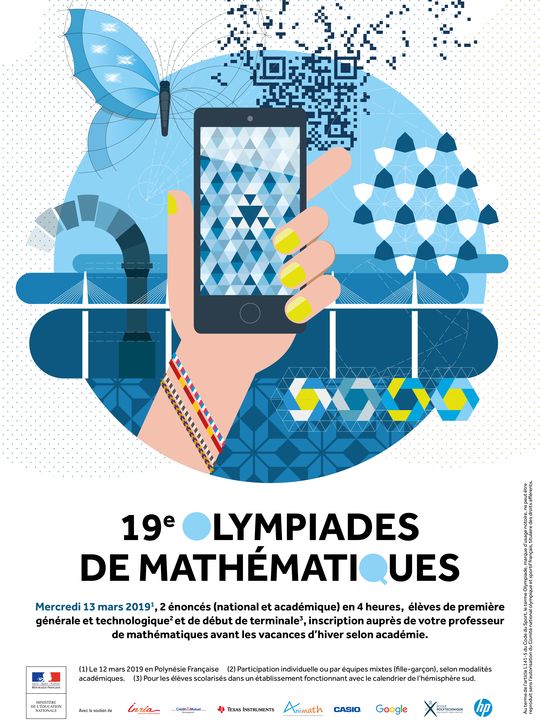 In the Créteil regional education authority, several schools put in place classes to prepare for the competition, in order to help and coach the students taking part. Subsequently, certain students benefited from an extra hour per week to test themselves and to try and solve exercises from the competition's past papers, whilst other students practised by themselves, or only discovered the competition on the day of the test.

“Personally, I really like mathematics and I'm even thinking about following a scientific option. At secondary school I had a one-hour class per week to practise but I still found the exercises quite hard. All of the other candidates from my school gave up before the end” Jacques, who came second in the individual and team competitions, tells us.

For Hector, who took first place, there was no coaching at school: “the maths teacher suggested we took part in the competition, on a voluntary basis, but I was the only one from my school to register - so I practised a bit, but on my own.”

“We weren't coached at school. As we all get on really well, there was a good cohesion within our group for the team challenge.  During the competition, we decided that all three of us would reflect on the difficult question together, but deal with the easier questions on our own, putting our trust in each other. And, with our method, we succeeded in managing our time well!” Adrien D., Adrien N. and Briac tell us, all three prizewinners in the team challenge.

In the Versailles regional education authority, the association 'Animath ', which is a partner of this event, helped with the recruitment and preparation of the participants. The aim of Animath is to foster the introduction, operation, development, networking, promotion and institutional recognition of mathematics activities in primary schools, secondary schools, sixth-form colleges and university-level establishments. It places particular emphasis on the development of workshops and clubs in the schools, the rapid development of mathematics competitions and the participation of as many pupils and students as possible - girls and boys - in this type of activity.

Emile, a Year 12 science stream student at the Lycée Hoche in Versailles, tells us that he “loves maths and taking up the challenges proposed by this discipline - one in which he wants to work later, either as a professor or a researcher.” It runs in the family for this young, national gold medallist whose uncle, as luck would have it, is none other than one of the renowned researchers in our research centre!

Marie, from the Lycée Lakanal in Sceaux, took part in the Year 11 team event at the Mathematical Olympiads.“The passion for mathematics runs in the family! I heard about this competition from my big brother, Jérémy, who is in Year 12, and who came second in the Olympiads this year. Together with two friends, who love maths as much as I do, we decided to take part in the team competition. I get really involved in this type of competition outside of school - for example, I have already taken part in the Kangaroo Mathematics Competition (Kangourou des mathématiques). Later on, I would like to be a researcher in mathematics. Moreover, in the work experience I've done, I've already been told about Inria. Maybe later I'll be a researcher there!”

This competition has therefore been the opportunity to meet prizewinners who are clearly passionate about mathematics, and perhaps even future Inria researchers to take on the challenges of the digital sciences.