Date:
06 Oct. 2014
Publish on 29/01/2020
Inria’s MoocLab developed the France Université Numérique platform with its partners, enabling France to position itself as a world leader in online education. The Support for Research and Innovation Inria award 2014 has been awarded to Inria’s team of researchers and engineers who implemented the platform in record time. 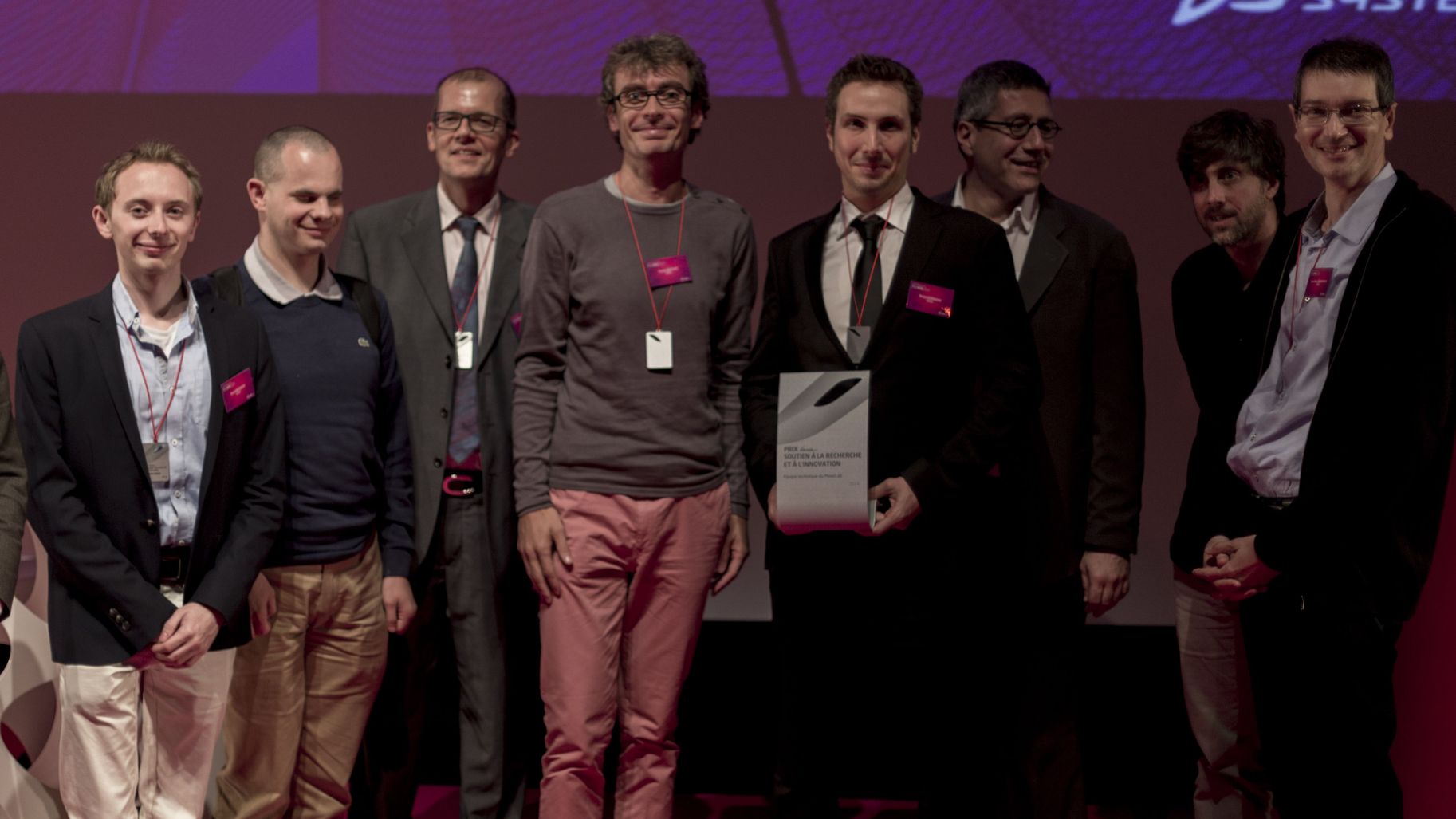 MOOCS (initials for “massive open online courses”) were created in America, and represent the major avenues for expansion by the universities and other prestigious institutions of higher learning. “MOOCs are open online courses that are accessible to the widest possible audience” explains Gilles Dowek, Head of the Deducteam Research Team who also runs Inria’s MoocLab. “They enable outreach to people who may not have access to a university”.

Conscious of the range of tools and the possibilities they offer, Inria created its MoocLab in the spring of 2013. The organization, consisting of ten members including researchers and developers, has several aims. These include the creation of MOOCs, installing and developing a MOOCs platform and motivating research into online teaching and education. MoocLab had barely been started when France’s Ministry of Higher Education enlisted its help. The task was to create a national platform to be called France Université Numérique [France Digital University]. “The university is changing through the effects of new technology and a massive increase in the influx of students. This is a development in the face of which Europe cannot remain passive”, considers Gilles Dowek. “With FUN, France is now positioning itself among the major players in online teaching on the continent of Europe”. The FUN platform was launched in January 2014 and has already attracted several hundred thousand learners.

“The initial work consisted in choosing a platform that used free software and that could be adapted to the needs of the French universities contributing to its development. We eventually chose Open EdX. I then helped to adapt this platform to the needs of the Ministry of Higher Education and Research. This tool has only recently been developed but we suggested technical upgrades for it, especially in personalization and translation. We were able to work remotely via instant messaging, telephone, email and videoconferencing. The Mooclab group meets physically once a month to discuss the development of the platform from both the technical and the teaching point of view. It is this synergy that has been rewarded by the Inria award for the various types of work performed by the team of researchers and developers. As for me, it is an adventure and a reward for all of us”.

“It was important for Inria and for France to adopt MOOCS because they offer the research community and higher education the opportunity of expanding internationally. Many countries have already adopted the idea. Much of our activity consists in adapting the OpenEdX software to our needs. We should like, for instance, to set an ethical policy for hosting data generated by the MOOCS. Our aim is to guarantee the confidentiality of the data and prevent it being exploited commercially by head-hunters or private companies. The data is currently hosted by the Centre Informatique National de l’Enseignement Supérieur [National Computer Centre for Higher Education] and has also been deposited at the CNIL . It is anonymized before it is used for research purposes. The Inria award was awarded in recognition of this entire project, as well as the talent and commitment of the MoocLab engineers”.

“Inria was involved at the very start of the venture. I was then asked to participate in the creation of four MOOCS at the Virchow Villermé Public Health Centre. This enabled me to understand the possible settings of the platform and to locate certain bugs. The Ministry then asked me to train MOOCS correspondents at the educational establishments who would be placing the first courses on the France Université Numérique platform. My current role is to organize production of the Inria MOOCS and help to develop this teaching model. We support the teachers creating the courses by defining the educational objectives, the format and the work done on the media… Application exercises need to be created with them and they need help in managing the forum for replying to students’ questions. Each MOOC represents a new challenge and an opportunity to question the model, making it a really exciting project”.

“I joined the MoocLab team in late 2013. I was responsible for maintenance of the FUN platform and I had to cure the problems that emerged, while the platform was being developed. From the human point of view, it really is a fantastic experience. The cohesion between developers is remarkable. With respect to the FUN project, we encountered difficulties and yet, at each stage, our senior managers have done so much to support us. In any case, as a general rule, everyone has been listened to and respected, regardless of the extent of his or her involvement in the project. This has been a much-appreciated climate of dialogue for a project of this size! The prize we have been awarded translates this state of mind. It symbolises the acknowledgement granted to teams who contribute indirectly but actively to scientific progress”.

“I share my time between my activity in the SEISM Hub and the Mooclab which I joined in October 2013. I work mainly on adaptation of the discussion forums to the needs of French-speakers. Through teaching software development at university, I was able to establish that digitisation has revolutionised the acquisition of knowledge. As far as I am concerned, the FUN platform illustrates France’s willingness to become deeply involved in this movement so as not to have solutions imposed on it that are hosted abroad. This is a formidable challenge. It involves making accessible to all a section of the knowledge community to which they might not otherwise have access and to create student communities linked by their desire to learn independently of their geographical location. As a public research body, it is Inria’s role to support these profound changes. By creating the MoocLab, it has reaffirmed its role as a mediator between the general public and the generator of computer innovation”.

“Initially, I offered support to Inria’s administration in assessing several strategies involving the MOOCS, basing myself on an initial study performed by Yves Bertot in January 2013. I subsequently joined the MoocLab and contributed to the development of the FUN platform. As a partner in this initiative, Inria is capable of assessing the impact of computer science on teaching: universalisation, facilitation of interaction between learners and teachers, and so on. It is important for a public institution such as Inria, and more generally, for French research to support these changes, especially from an ethical point of view. I am thinking in particular of the millions of items of data generated by the MOOCS platforms. The users need to be free to learn without there being a downside to the project. The danger must be avoided at all cost of people’s personal data being exploited for commercial purposes, at least without their consent”.

“I supervised the start-up of the FUN platform, especially during the test phase which was designed to ensure that thousands of users could connect to the platform simultaneously. Thanks to the work of the MoocLab team and of our partners, we were able to open the FUN platform with no worries about the connection or performance. I also organised the creation of the “buzzer”. This warns people of the meeting that happens once a month. All those running the platform reply to the users’ questions about the way it works. I have found this project to be exciting and enthralling; it is a vehicle for the values that Inria’s public service vocation represents. It is a matter of proposing an open platform for education to which each university, each school, can contribute and whose ultimate aim is to promote the dissemination of knowledge”.