A city in a cloud

Date:
03 May. 2021
Changed on 26/07/2021
Building a city from a cloud of points. Digital elevation models are a bit like Impressionist paintings, except that the brush strokes are replaced by billions of laser pulses. The result is just as impressive! The construction of these 3D digital models is the subject of a CIFRE PhD uniting the Pixel project team at Inria and the start-up RhinoTerrain. It is a close-knit collaboration based in Nancy. 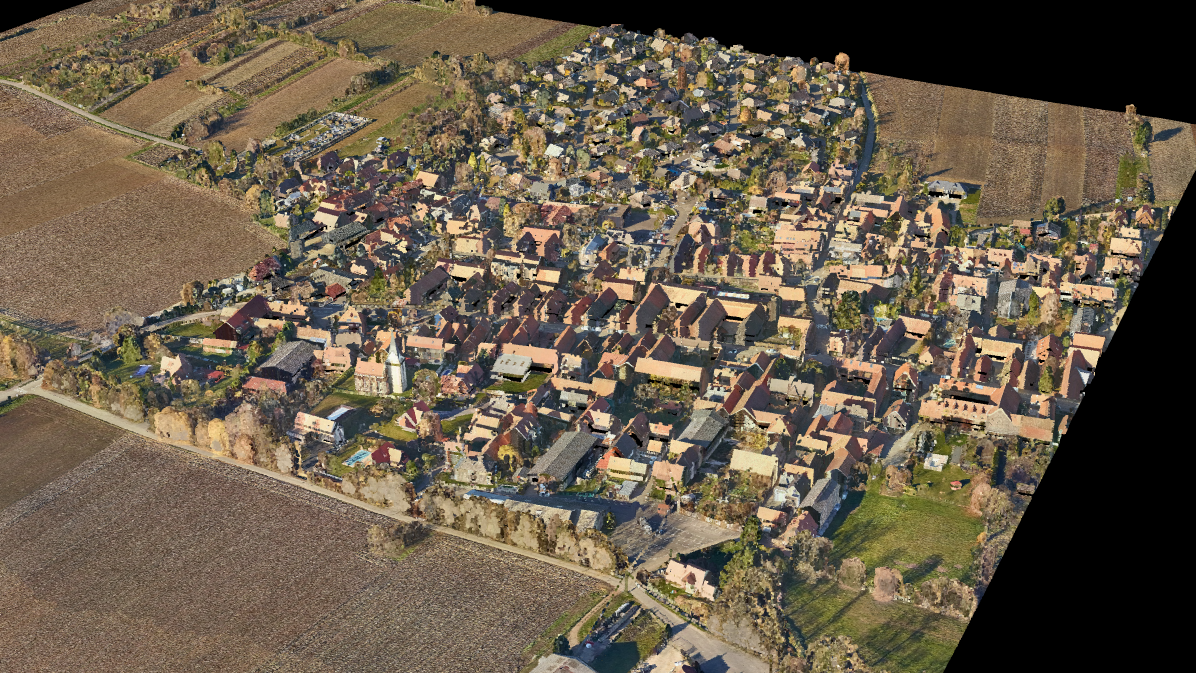 In the 17th century, during the reign of Louis XIV, the “decision makers” of the time built “relief-plans”, which were large models of the main ports and fortresses in France intended to help direct the defence of the kingdom. Albeit with more recent tools, the need for accurate and realistic modelling is just as great today. Launched in 2008, the Nancy-based start-up RhinoTerrain, winner of the i-LAB award for innovative technology companies, offers a range of software for its clients for planning the management of a city or the development of a local territory. These digital models, like those produced by the program RhinoCity, are, according to Hervé Barthélemy, Co-founder of RhinoTerrain, “a bit like a video game where you can build and manage a complex imaginary city, except that this is designed for professionals and models the architectural complexity of a real city”. The tool is currently used by seven of the ten largest cities in France. RhinoTerrain’s experience in geomatics, a combination of geography and computer science, comes from its founders, Frédéric Thomas and Hervé Barthélemy: the former was initially a surveyor before completing a specialised higher diploma (DESS) in computer science, while the latter is a doctor of computer science, a former lecturer at the University of Lorraine and a member of ISA, a former Inria team. In 2019, the entrepreneurs were reunited with Inria researchers through a new project called Rhino Point Cloud.

To successfully simulate a whole city in detail, the RhinoCity program uses photogrammetry, a modelling technique based on a very large number of mind-bogglingly high-resolution aerial photographs: “a pixel represents an area of 4cm²”, says Hervé Barthélemy. However, since the early 2010s, companies obtaining images also carry LiDAR (Light Detection And Ranging) equipment in their aircraft and offer their clients data collected using this method based on laser pulse remote sensing. With LiDAR, billions of laser beams are emitted towards the ground, with a beam striking the covered area every 20 to 30 centimetres. Depending on the quality and time delay of the reflected signal, scientists can deduce the characteristics of the target surfaces and generate scatter plots. “More and more clients were finding themselves with huge volumes of data without knowing what to do with them. To be able to use them, we needed a good algorithm and we contacted Inria to create this image reconstruction tool,” explains Hervé Barthélemy. Indeed, it is only when you move away from the scatter plot that the city begins to take form. Close up, it just looks like a cloud of dots. In December 2019, Justine Basselin began a PhD with RhinoTerrain to try to remedy this and simplify the recognition of buildings within these 3-dimensional sets of points. She divides her time between the RhinoTerrain and the Pixel team’s offices in Nancy (Inria & Loria), separated by just a few hundred meters.

This team of experts in numerical geometry is directed by Dmitry Sokolov: “We have a lot of experience in image synthesis for cinema and the video game industry. With RhinoTerrain, we are continuing our research into digital geometry. The challenge is to be able to make a 3d mesh, which implies dividing these clouds of points into small sections comprising roofs, windows, walls etc.” Whether it is for RhinoTerrain or Nasa, this meshing work is currently carried out by hand: “80% of digital simulation resources are dedicated to the manual creation of these meshes. With LiDAR, everything is done manually. With Justine’s research, we are trying to do things in semi-manual mode”.

The young engineer from Télécom Nancy discovered computer graphics with Bruno Lévy, currently Director of the Inria Nancy Grand - Est centre and a former classmate of Hervé Barthélemy from doctoral school. The PhD student is thrilled: “I like visuals and graphics and, in this field, when you launch your algorithm, you see the result straight away”. Justine Basselin’s algorithm facilitates the software operators’ task by detecting roofs in the clouds. She also provides them with models to reconstruct these digitised cities more easily. In March, Justine Basselin took part in the regional final of My thesis in 180 seconds.She explained how her research could be used for energy savings: “With these models, local authorities can locate urban heat islands and identify which roofs are most exposed to sunlight in order to install solar panels”. Her PhD will end in 2022 but the Nancy-based dynamic will continue. RhinoTerrain may also be getting back in touch with Inria in the coming years to develop new tools.