Human-machine interaction in the service of well-being

Date:
03 Dec. 2019
Changed on 02/01/2020
Born from a collaboration with the Potioc project team, the start-up Ullo is currently preparing its flight to Las Vegas for CES 2019 with the delegation from New Aquitaine. The Roche-based start-up, which is developing new therapeutic approaches for the care of cognitive disorders, will present Inner Garden, an interactive sensory sandbox. 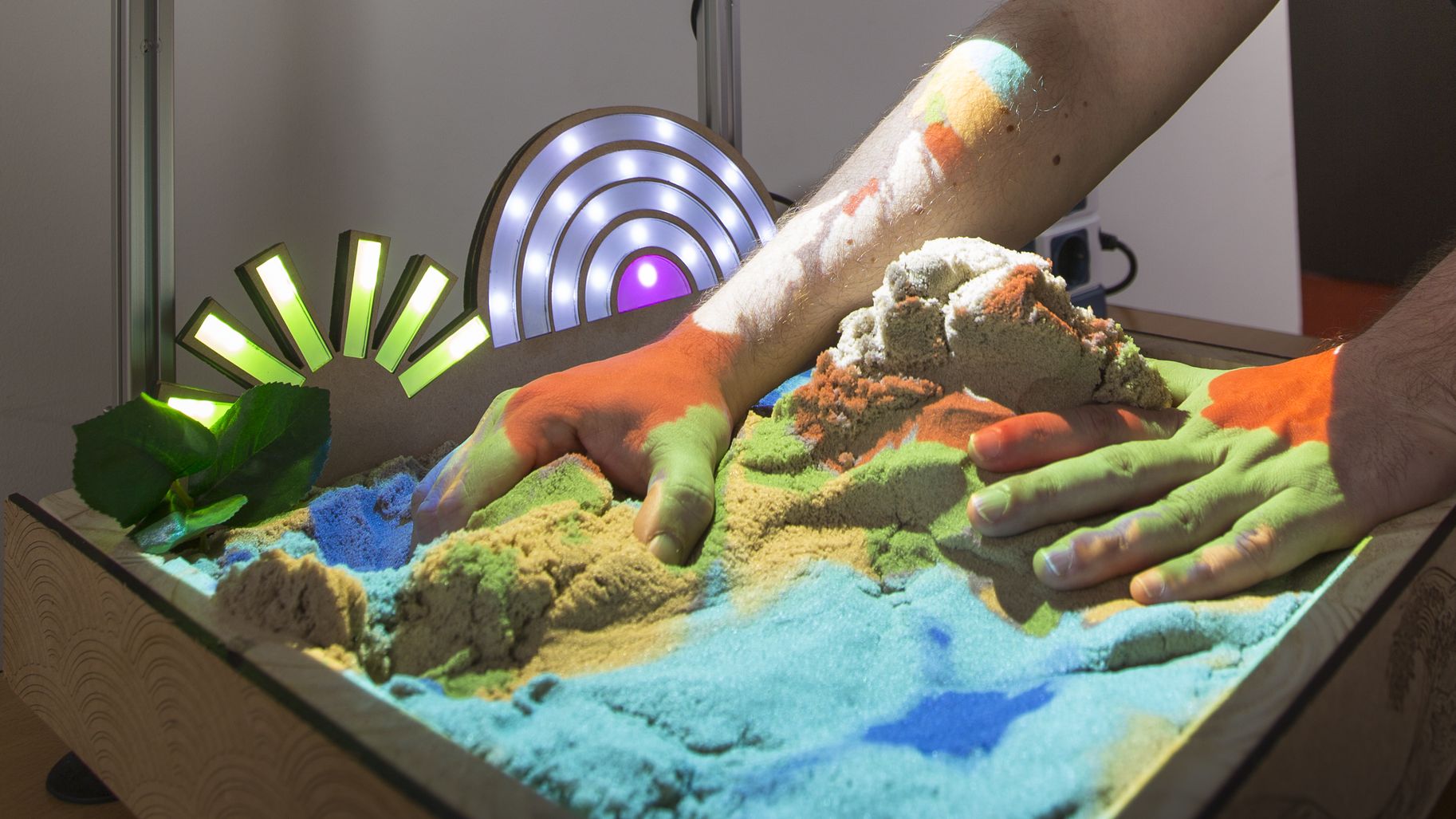 At first, it looks like a small sandbox, a little like those miniature “Zen gardens” that were all the rage several years ago. Then, the sandbox comes to life in the hands of the user. It dips into valleys and rises into hills, and takes on colours that fluctuate according to the person’s breathing and cardiac coherence (correlation between breathing and heart rate). It is no longer a sandbox, but a garden that blossoms through the internal rhythms of the person manipulating it. Created by the startup Ullo, the object is called Inner Garden, and it is being presented on 3 October at CES Unveiled in Paris before setting off for CES Las Vegas in January with the Nouvelle-Aquitaine delegation. What the visitors to CES may not know, however, is that the seeds for this garden were sown in 2016 within the Potiocproject team, a joint team involving Inria, the University of Bordeaux and CNRS.

Our team's main aim is to design human-machine interactions that are both engaging and motivating. Inner Garden is a project that synthesises our two main fields of activity: physiological interfaces on the one hand, and tangible representations on the other,


explains Martin Hachet, the leader of Potioc. More specifically, it is the fruit of the work of three PhD students – Joan Sol Roo, Renaud Gervais and Jérémy Frey – who originally designed it as a research object without initially realising it had potential beyond Inria.

By turning its back on the race for data that is currently driving the world of information technology, Inner Garden is a “calm computing” offering. The starting point was to see whether technology could listen to the body and promote well-being as part of an approach inspired by the practice of mindfulness meditation. This turned out to be a promising idea, as the work received a prize for the best paper at the CHI 2017 conference – the most prestigious event in the field of human-computer interaction.

At this time, Rémy Ramadour – then a PhD student in the Hephaistos team at Inria Sophia Antipolis Méditerranée – was looking for a post-doctoral contract. “On seeing an opening at Potioc, I met Jérémy Frey, and that’s how I found out about the Inner Garden project.” Although he was envisaging a post-doc, Rémy Ramadour also had entrepreneurial leanings, and with Inner Garden everything fell into place, tipping the balance in favour of starting a business. This led to the founding of Ullo in March 2016, with a central project: to develop Inner Garden to make it an intuitive biofeedback tool that allowed the rapid, prolonged regulation of the physiological symptoms associated with anxiety, aimed at professionals working in the fields of ageing and cognitive disorders. “A few months later, Jérémy Frey joined me at the head of the startup and the Ullo adventure really began,” continues the young entrepreneur. “We had a really intense year of collaboration with Potioc, ending with the production of a demonstrator that we began to present at industry shows in November 2017, and which is currently being tested in various establishments: nursing homes, homes for autistic children and work centres for people with disabilities, among others. And in December we will start the marketing.”

While it sounds easy on paper, this “ideal” journey from the laboratory to the “real world” owes a great deal to the involvement of the team dedicated to industrial transfer at the Bordeaux Research Centre. “Every project we support has specific features, and this one turned up once the collaboration was already under way and financing opportunities had been identified,” recalls Cédric Quinot, Technology Transfer and Partnerships Officer at Inria BSO. “In this specific case, my task mostly involved establishing the mode of collaboration that best suited the expectations of both parties, and setting out the budgetary, administrative and legal framework for the transfer.” “Which is very important is for a brand-new company!” chips in Rémy Ramadour. “Thanks to Cédric, the various stages went smoothly, and we never had the feeling of being swamped by the procedure and papers to fill in.”

Still based in La Rochelle, supported by the Nouvelle-Aquitaine regional authorities and now with six employees, Ullo is actively continuing its development, with Potioc. “After marketing the Inner Garden and CES, we are going to focus on another team project, known as TOBE (Tangible Out of Body Experience). This is a little humanoid avatar that allows the internal state of users to be visualised, while several physiological measurements are illustrated in real time.” And why stop there? The two partners are planning to explore new areas in the coming months, with the launch of a new joint R&D sequence. “For Potioc, it is an extremely positive dynamic,” concludes Martin Hachet. “We often think that researchers like working in isolation. But really, the sense of usefulness that we get from this type of experience is the best stimulant there is!”

Inner Garden is the winner in the category "tech for a Better World", with honourable mention. A distinction granted to only about thirty companies in each category for the CES.