“How to robot”: follow Luigi Penco through his PhD on robotics

Date:
14 Oct. 2019
Changed on 13/03/2020
Luigi Penco is currently doing a PhD at Inria Nancy (LARSEN team), where he works with humanoid robots. Beyond his scientific life, Luigi is also a passionate and committed robot-ambassador who shares his passion on social networks like Instagram and Youtube. With several thousands of followers, he successfully reaches out to young audiences, to show them how exciting and useful robotics is… and maybe convince them to join research? 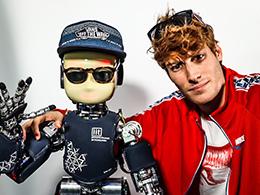 Luigi Penco started a PhD in April 2019 at Inria Nancy (within LARSEN, a joint Inria and Loria research team), under the supervision of Serena Ivaldi, Inria tenured research scientist, and Jean-Baptiste Mouret, Inria Senior Researcher. They are both prominent robotics researchers who use innovative machine-learning technologies to better control robots, give them the ability to recover from unforeseen damages, or learn how to better interact with humans.

From engineer to PhD student

Luigi Penco first met them in 2017, when he integrated the LARSEN team as an intern, during his Master in robotics and artificial intelligence at the University La Sapienza (Roma, Italy). After obtaining Master’s degree, he came back to LARSEN as an engineer for one year, in 2018.

“I was initially scared by the complexity of robotics”, explains Luigi Penco. “It requires a whole world of competences like mechanics, electronics, control theory, coding, computer vision ... Building your knowledge base in this field is a very analytical process. Being a creative person, I was anxious that all this analysis would kill my personality. While I was wondering what to do after my Master’s degree, Serena convinced me that a one-year job as an engineer in her team could be a good way to think about my next career-step. In that year, I became more confident and I realized that there can be a lot of creativity in robotics and that I could really express myself. I loved it and I decided to start a PhD, addressing some really interesting challenges.”

His main PhD supervisor is Serena Ivaldi who is also strongly involved in the EU H2020 ICT project AnDy (Advancing Anticipatory Behaviors in Dyadic Human-Robot Collaboration, 2017-2020). This project aims at improving the ability of robots to cooperate with humans in industrial and domestic environments, by interpreting their physical movements and reducing their risk of injury. Luigi Penco is therefore involved in European collaborations, mainly with the Italian Institute of Technology in Genova (Italy) and his former University, in Roma.

His daily robot friend is an iCub, as tall as a five year old child. Luigi keeps making their communication more efficient thanks to better hardware and software computing… and very often repairs broken arms or legs: “when you try to control a robot with new algorithms, especially on lab’s robots because they are experimental, you are never sure that the hardware won’t break!” Luigi’s research interest is in the teleoperation of humanoid robots: he is involved in developing technologies to remotely control them via a sensored suit, an exoskeleton or by visual-tracking with cameras. The human operator using these devices performs some movements and the robot replicates them in real-time. Teleoperation is crucial to remotely control robots in environments that can be inaccessible or dangerous for humans, like disaster response scenarios or the Moon, where robots could help humans build colonies.

This technology is also useful because it automates the design of the motion trajectories for robots, that still requires a great amount of research to become fluid. A robot that would not be teleoperated would require a separate code for very single movement he would make. Teleoperation enables the robot to function on a much lighter code and if you add machine-learning technologies to the equation, like Luigi and his supervisors do, it is possible to further automate its functioning.

« How to robot » on social media

However, being miles away from Italy and becoming an expert in a new field is not a big enough challenge for this former Erasmus student in Dortmund (Germany). He now has his own Instagram account and Youtube channel where he posts weekly educational videos, vlogs on roboticists life, robotics talks, videos of experiments and practical sessions with open source code. His more than 10000 Instagram followers are proof enough of his success. Although his  “How to robot” Youtube channel is more recent, the amazing quality of the videos (thanks to a training in film-making done during his time as an engineer) should push it up the charts very rapidly.

“Robots can automate many jobs”, he explains. “They cannot replace humans, and they never will. But they could help us in dangerous jobs or heavy works. I really felt like robotics was not well known to the general public and I began to tell about it on my Instagram account twice a week. Afterwards I decided to have a Youtube channel because it is what people are using now”.

On his weekly video, Luigi will then attempt to familiarize a broader audience with his robotics research, both by explaining it in a pedagogic way and showing experiments. “Being on social networks is not a requirement for a researcher but I really like producing videos! I want to share my interest for robots, what they could do for (and with) humans and also I like this great challenge of making a robot work efficiently!“