Hélène Barucq is what you might call a pure product of academia. Strongly passionate about mathematics, she specialises in simulating wave propagation, which has seen her develop a close partnership with Total on practical applications linked to energy and the environment. In charge of the MAGIQUE-3D team (Advanced Modelling in 3D Geophysics), the researcher’s work involves producing images of the depths of the Earth and, in the near future, the Sun, through the development of extraterrestrial seismology. 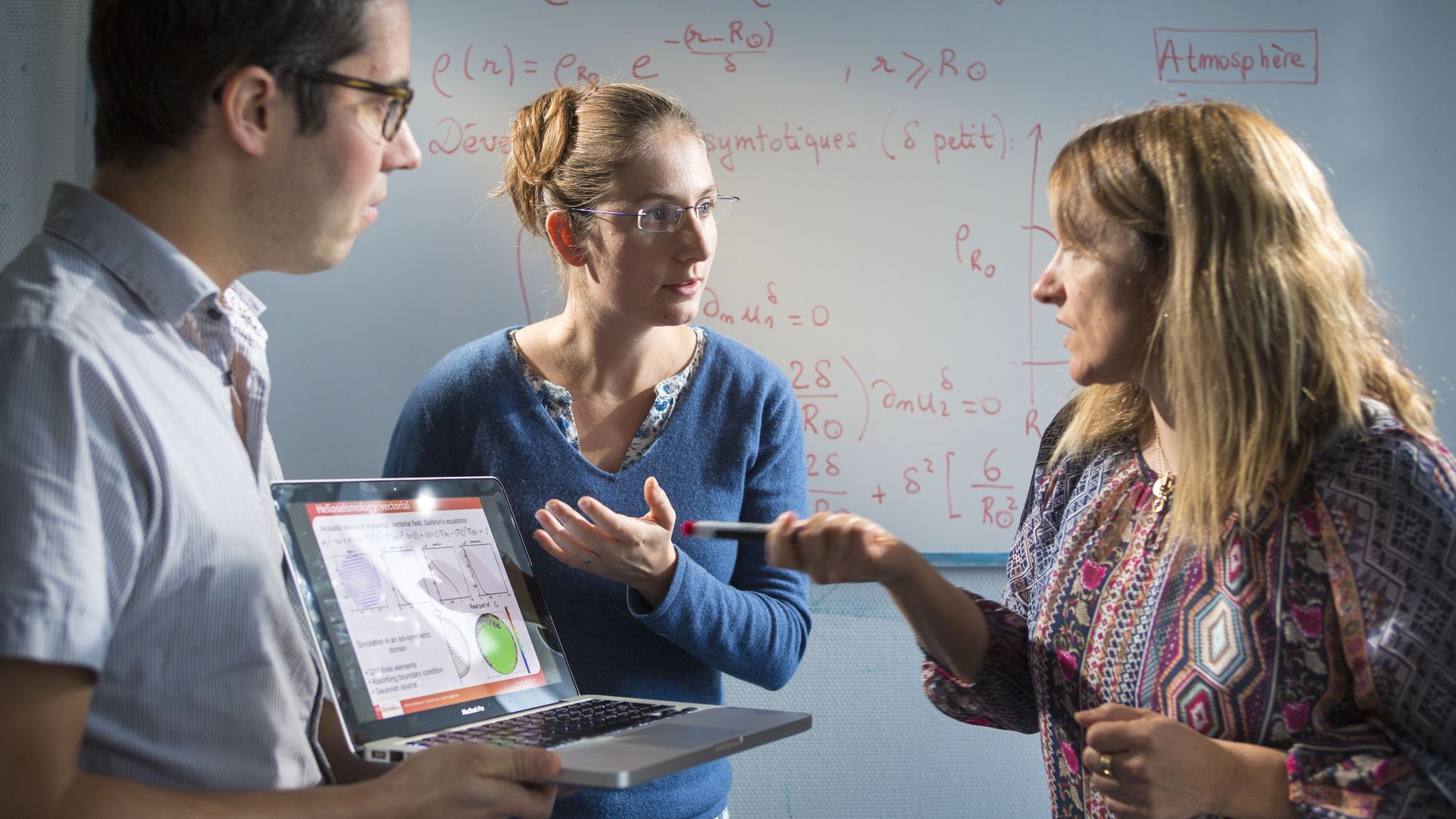 Hélène Barucq was born in the Basque Country. The daughter of a printer, she studied mathematics at the University of Bordeaux. Particularly interested in mathematical modelling for use in physics, she studied for a Master’s degree in applied mathematics, during which she drew the attention of three of her professors, who encouraged her to apply for an internship at the CEA-Cesta (the Centre d’études scientifiques et techniques d’Aquitaine - the Aquitaine Centre for Scientific and Technological Research). Having never imagined she could break into such elite circles, this was to prove a key moment in her career. One of her supervisors, Bernard Hanouzet, later suggested she continue her PhD research by working with him on the use of Maxwell equations for simulating electromagnetic waves, stealth radar and the capacity of certain vehicles to avoid radar waves. This exciting opportunity allowed her to experience research as part of a team.

With the support of her PhD supervisor, Barucq decided to apply for openings for research lecturers at a number of different universities, but left the CNRS and Inria off her list, believing these to be out of her reach. The University of Pau and Pays de l’Adour was the first to give her a positive answer. Her response came instinctively, opening up a number of doors and kickstarting her career as a researcher. When her main partner left just a year later, the young research lecturer found herself alone in charge of her research subject, supervising two PhD students. Ten years down the line, she is a Director of Research at Inria Bordeaux.

Exploring the inside of the Earth

Barucq’s path to where she is today was a long one, with the researcher meeting key figures along the way. In 2001, she met Henri Calandra, an engineer with Total who had studied for a PhD in mathematics at the University of Pau. Calandra was looking for someone to jointly organise a seminar by Marteen de Hoop, a specialist in seismology and geodynamics whose approach to mathematics was very close to the method used by Barucq to model stealth waves in electromagnetism. Thus began a fruitful collaboration, resulting in Total taking the decision to fund a PhD supervised by Hélène Barucq in 2001. This allowed her to put together her own technological research team at her university, tasked with exploring the earth’s subsurface.

Her work attracted the attention of Claude Puech, then in charge of Inria deployment across a number of sites, including the site in Bordeaux. He suggested that she set up an Inria team. Working with a new partner, the geophysicist Dimitri Komatitsch, she launched the Magique-3D team the following year. A joint undertaking involving the University of Pau and the CNRS, this team brought together mathematicians and geophysicists with the aim of developing digital methods for characterising different environments through the propagation of mechanical and electromagnetic waves. This research was primarily applied to exploring the interior of the Earth and its subsurface, the goal being to identify deposits of either fossil or geothermal energy. 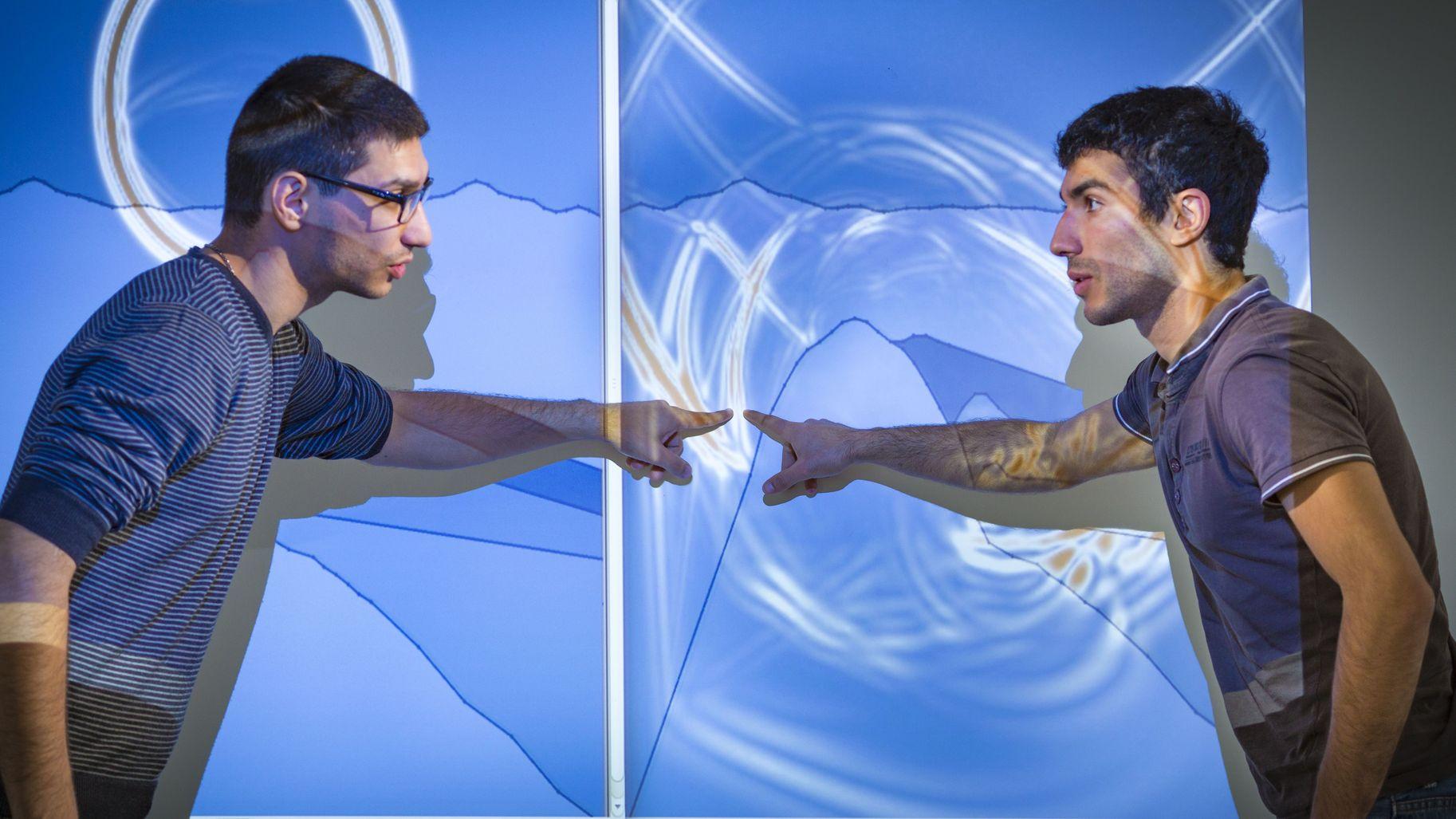 A major partnership with Total

This team was highly original in the French landscape. Not only did it develop models subsequently used for mathematical analysis, but it also devised “higher order” digital methods, with a degree of approximation enabling them to develop models that closely reflected reality. These were then implemented and tested on real applications in geophysics. “Our strength lies in the fact we pursue ideas through to their conclusion, going as far as developing blueprints and applying them”, explains the researcher. “This is the big difference with a university research laboratory. An Inria project team is not a group of individuals, but a team focused on a clearly-defined scientific objective.”

This was enough to convince Total of the team’s long-term suitability: in 2009, the group signed a partnership agreement with Magique-3D as part of a research programme called “Depth Imaging Partnership (DIP)”. The programme, which the Inria project teams Hiepacs and Nachos are also involved in, has been renewed several times and has just been extended until 2022. Its goal is to assist with drilling through seismic imaging, in addition to geothermal energy and storage applications. In a tangible sense, the programme involves funding PhD students and one research engineer position to help transfer the results obtained to a computational platform developed by Total-Houston. This partnership had an impact on the team’s working methods, leading them to go further than they had first thought and tackle areas of mathematics they might not have dared to otherwise.

The risk paid off, with Magique-3D developing a strong reputation in the geophysics community. Indeed, the team’s work has enabled it to play an important role in the Energy Environment Solutions (E2S) project, working alongside the laboratory for complex fluids and their reservoirs at the University of Pau to devise digital methods for simulating and understanding wave propagation in porous conductive environments. The project now has geothermal energy applications in its crosshairs. E2S is coordinated by a consortium made up of the University of Pau and Pays de l’Adour, Inra and Inria. The consortium has been awarded the I-Site label, a distinction granting it a place among universities of excellence. This is fitting recognition for such an original, challenging project, and one that will no doubt benefit from Hélène Barucq's tenacity.

Beyond the realm of geophysics, the techniques used to image complex environments can be useful in a number of other surprising fields. One example involves instrument makers, who, through these methods, are able to hear how a particular design will sound before the instrument has even been made. Magique-3D was able to put its understanding of wave propagation to good use, working with the European Technological Institute for Music Professions (Itemm - l’Institut Technologique Européen des Métiers de la Musique) to create a virtual prototyping tool. This feature is expected to be available in early 2020.

The next target has already been set: developing a tool capable of doing the opposite - identifying an instrument able to produce a given note. The next few years should be filled with exciting research and who knows? Perhaps a new project team in the offering...

A new team for a new subject

After 12 years of adventures, Magique-3D is due to come to an end in December 2019, like all Inria project teams. But the “magicians”, as they are known by their colleagues, still have one more trick up their sleeves, and plan to form MAKUTU (a word that means “magician” in Maori, the language of a people that have had a big influence on Hélène Barucq, a huge rugby fan). Sub-titled “Higher order methods for extraterrestrial seismology”, this future team is looking to promote research into exploring deep Earth, in partnership with seismologists from the University of Berkeley. But why extraterrestrial? This is because, alongside the Max Planck Institute for Solar System Research in Göttingen, Hélène Barucq and her team are also looking to image the interior of the sun. The aim of this research will be to develop an understanding of solar flares and be able to anticipate them. The potential for discovery is enormous, but the physics employed will be very different from what the team is familiar with. In any case, it looks set to be a real challenge!