Date:
22 Jul. 2019
Changed on 10/02/2020
Two project teams, MFX (Matter from Graphics) and Pixel, joint undertakings involving Inria and Loria based in Nancy, have developed an innovative software for the 3D printing of curved surfaces. In order to avoid “the staircase effect”, the new algorithm CurviSlicer divides the shape of the part to be printed into curved slices in such a way that the deposition follows the surfaces naturally. This makes it possible to perform deposition along smooth curved surfaces using a conventional fused filament 3D printer. Their work will be unveiled at the international conference SIGGRAPH on 31st July 2019. 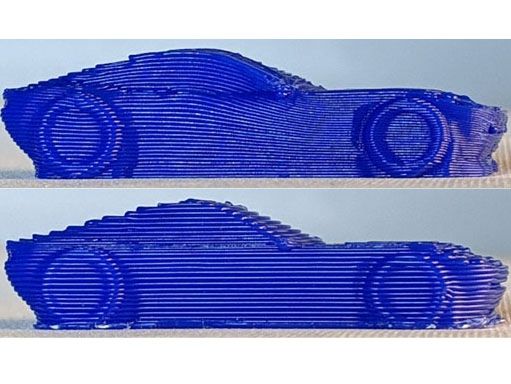 The manufacturing of objects through 3D printing has undergone a process of democratisation, with fused filament printers now available to CAD professionals, in FabLabs, in schools, and in the homes of makers. One defect often produced through 3D printing is the “staircase” effect, which appears along gently inclined upper surfaces: the “roofs” of curved shapes. In such cases, manual sanding is often required in order to obtain a smooth finish.

“We wanted to make it easier for anyone to manufacture slightly rounded objects using a filament printer” , explains Sylvain Lefebvre, Inria research director and in charge of the MFX team.

For a long time, this imperfection affecting objects with gently inclined surfaces was seen as being inherent to the manufacturing technology itself, given that it involves the material being gradually deposed in flat layers having a uniform thickness. First a desired object is modelled in 3D and then  a software computes the horizontal movement instructions driving the printing head in order to manufacture each flat layer.

It is possible, however, to move the nozzle of a conventional filament printer vertically during deposition, enabling it to depose melted material along paths curved in all three directions. This feature is rarely used, given the difficulty in obtaining an algorithm capable of dividing any part into curved slices without introducing the risk of collisions between the printer and the part being manufactured. Other constraints must also be taken into account, including the minimum and maximum deposition thicknesses. Until recently, there was no algorithm that would enable conventional printers to take advantage of this vertical movement during deposition for any input model.

Working in collaboration with researchers from Germany, the USA, Canada and Hong Kong, the researchers from MFX and Pixel were able to create such an algorithm. Their approach makes it possible to progressively  vary the height and the thickness of the deposition, all while ensuring that no collisions can possibly take place. In this way, they are able to program material deposition to follow the part’s natural slopes (lower than 30°), as opposed to using a sequence of flat horizontal  slices.

From the final shape of the object to be printed, the algorithm optimises the trajectory of the printing nozzle and the material depositions, taking different constraints into account such as the presence of gentle slopes, the shape of the nozzle head and the risk of it colliding with the material already deposed. The algorithm is thus able to produce a series of instructions continuously adjusting the altitude (z) of the nozzle and the quantity of material deposited at each point, making it possible to form curved layers of varying thickness.

“The algorithm can be used to obtain much better gentle slopes on objects, using existing 3D printers”, explains Sylvain Lefebvre.

One downside is that this new process takes longer to calculate the trajectory for the head (it takes several minutes - as opposed to several seconds - to calculate the trajectory of the nozzle). Given the quality of the result obtained, however, it’s worth the wait on most models. The fact that the final surface is closer to the desired smooth result makes the finishing  step much easier. Finally, the process increases accuracy for a same number of slices , saving time.

In order to ensure that it has as much impact as possible, this algorithm, available in an implementation called CurviSlicer, will be released in source code so as to enable users of 3D printers to make use of it.

SIGGRAPH (Special Interest Group on Computer GRAPHics and Interactive Techniques) is a major international computer graphics conference. First launched in 1974, each year it brings together a wide range of people from the worlds of industry, art and science engaged in image synthesis, whether this is for animated films, for creating special effects, for video games or for software programs used for 3D modelling.  The 2018 edition, which was held in Vancouver, was attended by 16,500 people from 88 different countries.

The 45th edition of SIGGRAPH will be held at the Los Angeles Convention Center from 28th July to 1st August. MFX, a joint undertaking involving Inria and Loria, will present three scientific papers at the event.  The results put forward concern new algorithms that have been optimised for the 3D designing and printing of curved depositions on standard filament printers, metamaterials based on multi-sided star shapes and anisotropic structure patterns with physical property gradients.

The CurviSlicer software program will be unveiled at the SIGGRAPH conference at 11.29am on 31st July as part of the “manufacturing” session in room 150/151.