Date:
09 Mar. 2020
Changed on 07/04/2020
Supported by the Academic Delegation for Artistic and Cultural Education, Inria, Nouvelle-Aquitaine Regional Council and the Blaise Pascal Foundation, the Louis 14.0 project is breaking down barriers when it comes to scientific outreach in schools. Led by Juliette Chabassier, a researcher at the Inria Bordeaux - Sud-Ouest research centre and a member of the Les Précieuses collective, the project has been included in the “Artists’ Residence” project at Auguste Blanqui Middle School in Bordeaux. This interdisciplinary experience demonstrates the benefits of scientific projects when it comes to artistic and cultural education. 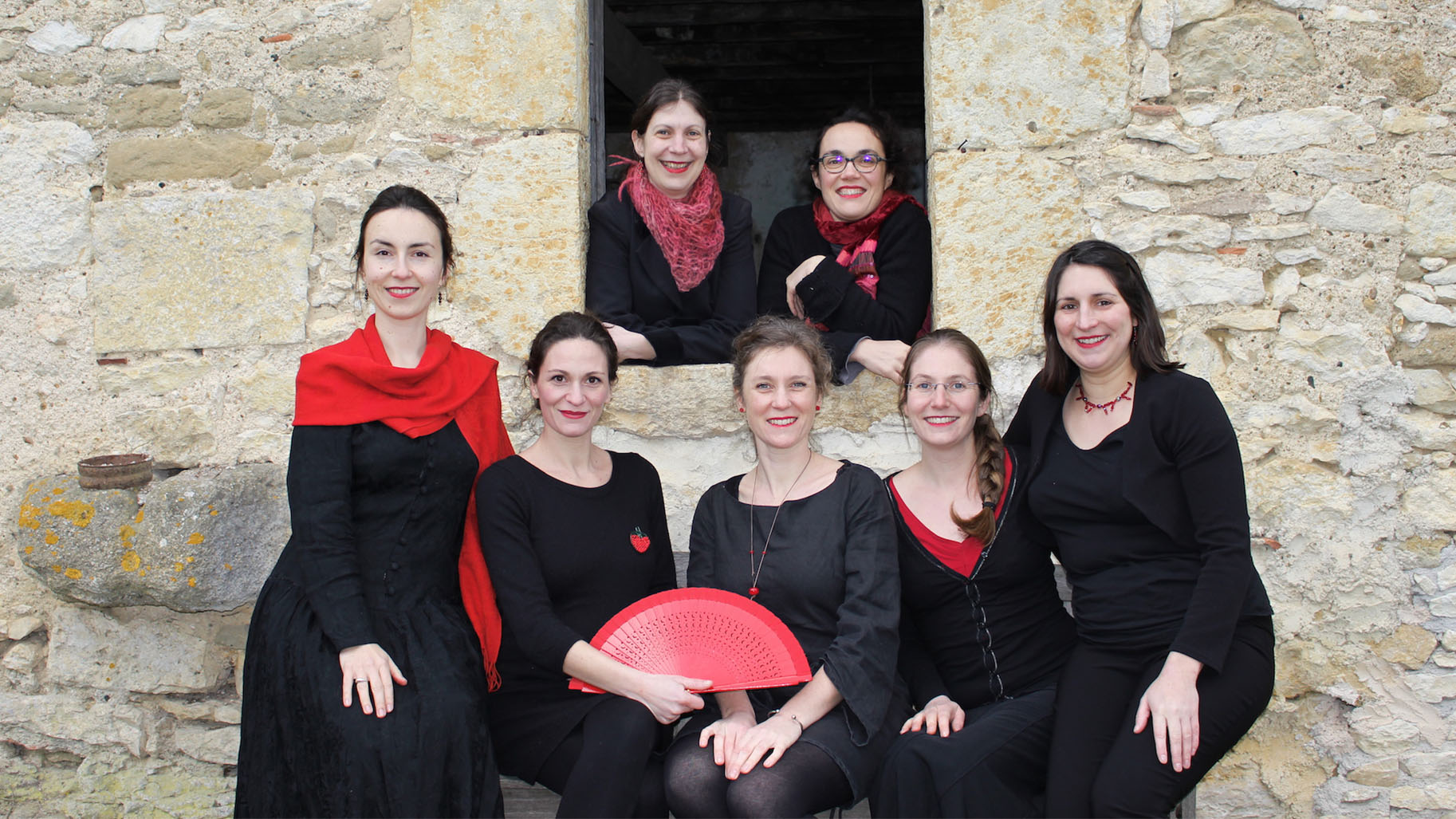 How do you find the frequency of a sound? Calculators in hand, pupils at the “resonance and modes” workshop attempt to solve this first problem posed by Juliette Chabassier, oboist and applied mathematician. Once the formula has been explained, the pupils observe that the higher the frequency of a note, the higher its pitch will be. And what if this frequency depended on the length of the pipe of the instrument being used? Time for a new calculation, this time using a concrete example: panpipes.

Today, Thursday 6 February, marks the beginning of an unusual week for the two third-year classes at Auguste Blanqui Middle School, who are participating in the “Baroque 2.0?” project. This blend of music, science and theatre is an integral part of the “Artists’ Residence” school project, which is supported each year by the Academic Delegation for Artistic and Cultural Education. Devised and run by Claire Gaucherand, a professor of musical education, Hervé Dicharry, a maths teacher, and the entire Les Précieuses collective, which is made up of six musicians and an actress, the aim of the eight workshops is to make artistic and scientific culture accessible to these pupils. They have their roots in the Louis 14.0 project, a show that features explanations from the worlds of maths and physics in order to explain musical concepts. 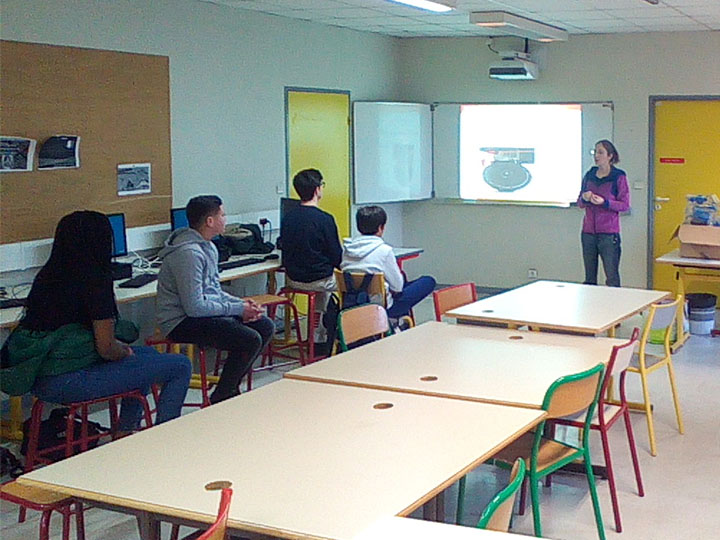 In five years spent at the school, this is the first time that Claire Gaucherand has been in charge of a project involving so many different disciplines.

Unfortunately, teaching is too compartmentalised and music is often considered to be entertainment, when in fact it is an expression of what is happening in society. It translates different movements of thought, and I am convinced that it helps build intelligence”.

Keen to build bridges between her subject and mathematics, Gaucherand and her colleague Hervé Dicharry decided to put together a project centred around the baroque and digital technology. The Academic Delegation for Artistic and Cultural Education then reached out to Les Précieuses, who had launched the Week of Mathematics the year before.

We had full confidence in the ability of the artists to run this ambitious, interdisciplinary project alongside Claire and Hervé. Out of the twenty-two residences selected this year in Gironde, five are scientific, which shows that considerable progress has been made. The experience on offer at Blanqui Middle School is part of this.

explains Sophie Mouge, Academic Delegate for Scientific Culture to Bordeaux Education Authority. This initiative is also in keeping with the Year of Mathematics programme.

Off the beaten track 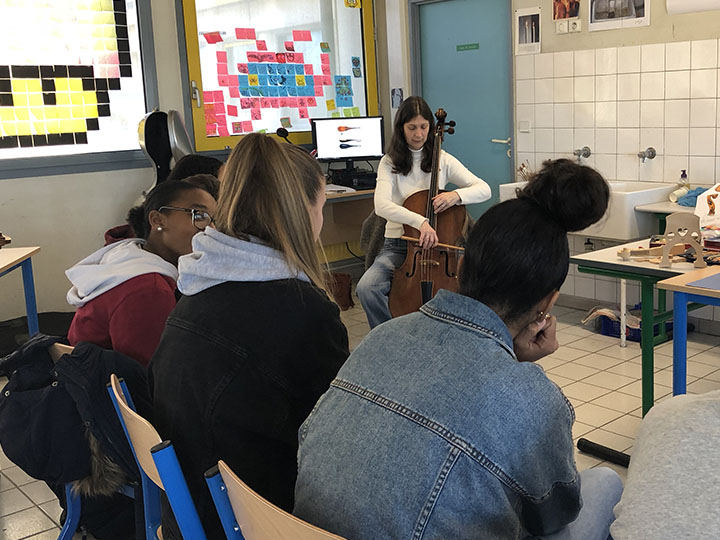 Since September 2019, forty-four pupils have been experiencing a taste of the Baroque, with the art and science residence being the highlight of this. This is a challenge in a school in a disadvantaged area of Bordeaux that has been given priority status and where the dropout rate is high. That said, the pupils have been getting into the spirit of things. Whether it's through singing, rhetoric, theatre, dance, rhythm and frequency or pitch exercises, the pupils form small groups to explore the world of the 17th and 18th centuries. Susan Edward, a cellist, sets the tempo for the organology workshop, in front of non-musicians. Through the different eras and the place of music in society, she offers a detailed look at the making of stringed instruments. Which technology is used? What impact does this have on sound? How can mathematics be used to create sounds? Slowly but surely, the message is starting to get through. The pupils will also have the opportunity to discover the possibilities on offer through digital simulation over the course of the week and to work on a model of a harpsichord. Susan then gets her cello out and begins to play The Carnival of the Animals by Camille Saint-Saëns. The audience is captivated. At the end of her performance, Juliana speaks up: “It sounds like a bird, miss.” Why does the melody make her think of a bird? Susan encourages her. “I don’t know. It’s graceful.” “It's a swan!” exclaims Tessa.

Can emotion be used as a gauge when it comes to evaluating the impact of an educational initiative? While immediate impact is difficult to measure, Delphine Guéry, a flute teacher, has seen the influence it's already having:

The best thing about all of this - and this is one area where we can say we have achieved most of our aims - is that we now have one pupil who wants to learn the cello, two others who want to get involved in theatre outside of school and a fourth who has become aware of their rhythmic capacities, which could encourage them to take up percussion.

Another cause for satisfaction was the success of the Louis 14.0 show, in which twenty-four pupils participated, playing opposite the artists on Friday 14 February at the Point du Jour venue. This was the last act of this school residence.