SOFA: a consortium on the theme of real-time simulation

Date:
05 Jan. 2016
Changed on 31/03/2021
As the SOFA numerical modelling software package celebrates its 10th anniversary, the founding members have decided to come together in a consortium. The purpose is to unite a community of researchers and companies in order to pursue its development. 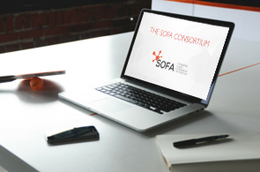 There are currently four Inria teams working daily to improve SOFA, each in its own particular field: Mimesis in Strasbourg, Imagine in Grenoble, Defrost in Lille and Asclepsios in Sophia-Antipolis. They all use the software as a common technological building block, to which they add their own functionality. One of the aims of the consortium, which was created in late November, is to reinforce and consolidate this joint resource. "SOFA is cutting-edge software, but it can still be improved," says François Faure, Professor at the University of Grenoble-Alpes and member of Inria's Imagine team. His team has been using and improving SOFA for 10 years in the field of augmented reality. His view is that the consortium first and foremost unites a community around the software to make it progress. "This consortium will enable us to recruit engineers to boost SOFA's performance and make it more user-friendly. "

Health: a sector with high potential

The other aim of the consortium is to build links with the business world. Arnaud Laprévote, Director of Partnerships and Innovation Projects at the Inria Nancy – Grand Est Centre, believes that SOFA could have interesting applications in the field of medical simulation. "We are only at the start of the numerical wave in the health sector," explains this former company director. We must start preparing now."  In fact, the teams that use SOFA very quickly turned to medical applications. The Mimesis project team at Inria Nancy – Grand Est has even set up shop in the University Hospital in Strasbourg. "Our software is used in other countries by scientists, start-ups, big corporations, and medical practitioners," explains Hugo Talbot, consortium coordinator. SOFA is a platform that allows multi-physics simulations to be performed in real time, reproducing various physical phenomena through calculations. This provides the capability to model the electrical activity in the heart, or even to understand the mechanical behaviour of the liver. In particular, this type of simulation can help in understanding and preparing for surgical procedures. Stéphane Cotin and Christian Duriez, who lead the Mimesis (Strasbourg) and Defrost (Lille) teams respectively, are two of the five founders of a start-up called InSimo, created in 2013. This company develops medical simulation solutions, and is already enjoying considerable success. In Grenoble, Anatoscope, a start-up founded by members of the University of Grenoble-Alpes, the CNRS, and the university teaching hospital, is accompanied by Inria and uses SOFA to create interactive anatomical models. "One of the growth directions for the consortium is towards companies that design medical devices," according to Arnaud Laprévote.

But SOFA's potential is not limited to the healthcare sector. From a common core, the software can be deployed in other fields. At Inria Lille – Nord Europe, the Defrost team led by Christian Duriez wants to forge ties with the robotics community. Its researchers are working on modelling deformable robots, which are able to get into hard-to-access places. They can be used in surgery, but the Defrost team is also thinking about industrial applications. "In particular, we are working on a manipulator arm project. It is a perforated polymer with cavities, and it operates on compressed air. When the robot is empty, it is thin and flexible, and can squeeze into narrow spaces. When filled with compressed air, it stiffens and is then able to carry a load." A small German company, Truphysics, is already working with SOFA on modelling stiff robots, and could take an interest in this new application. For researchers, these partnerships with companies provide a way of validating and promoting their work.

Hugo Talbot, Coordinator of the SOFA Consortium. "The consortium lets us federate a community."

"Creating a consortium around SOFA is a very old idea. But the researchers wanted to reach a critical mass first; they had to gather enough people around the software. Today, our work has gone beyond the research phase, because it has caught the interest of companies in a variety of sectors. External research teams from outside Inria are participating: most notably, teams from the CNRS and the University of Karlsruhe in Germany. That is why the founders (Mimesis, Defrost, Imagine and Asclepsios) felt the time was right. We could have considered technology transfer to a company, but we wanted this software to remain open and free. The consortium lets us unite a community of participants from the business and academic worlds around a piece of software that has a strong identity. As Coordinator, I am in charge of creating the link; over the coming year, in particular, I must meet and present the project to about thirty companies that we have identified. "