AGIMUS: a collaborative EU project aimed at simplifying the integration of robots

Date:
16 May. 2022
Changed on 19/05/2022
The scientists Nicolas Mansard , Justin Carpentier and Josef Sivic are set to work on AGIMUS, a collaborative EU project. Their focus will be on simplifying the integration of robots, not just in industry but on a wider scale as well. With this project having just been approved by the European Union, now is the ideal time to take a look back at their journey so far, from getting the idea for the project and coordinating the nine partners involved in it, all the way through to putting the project together. 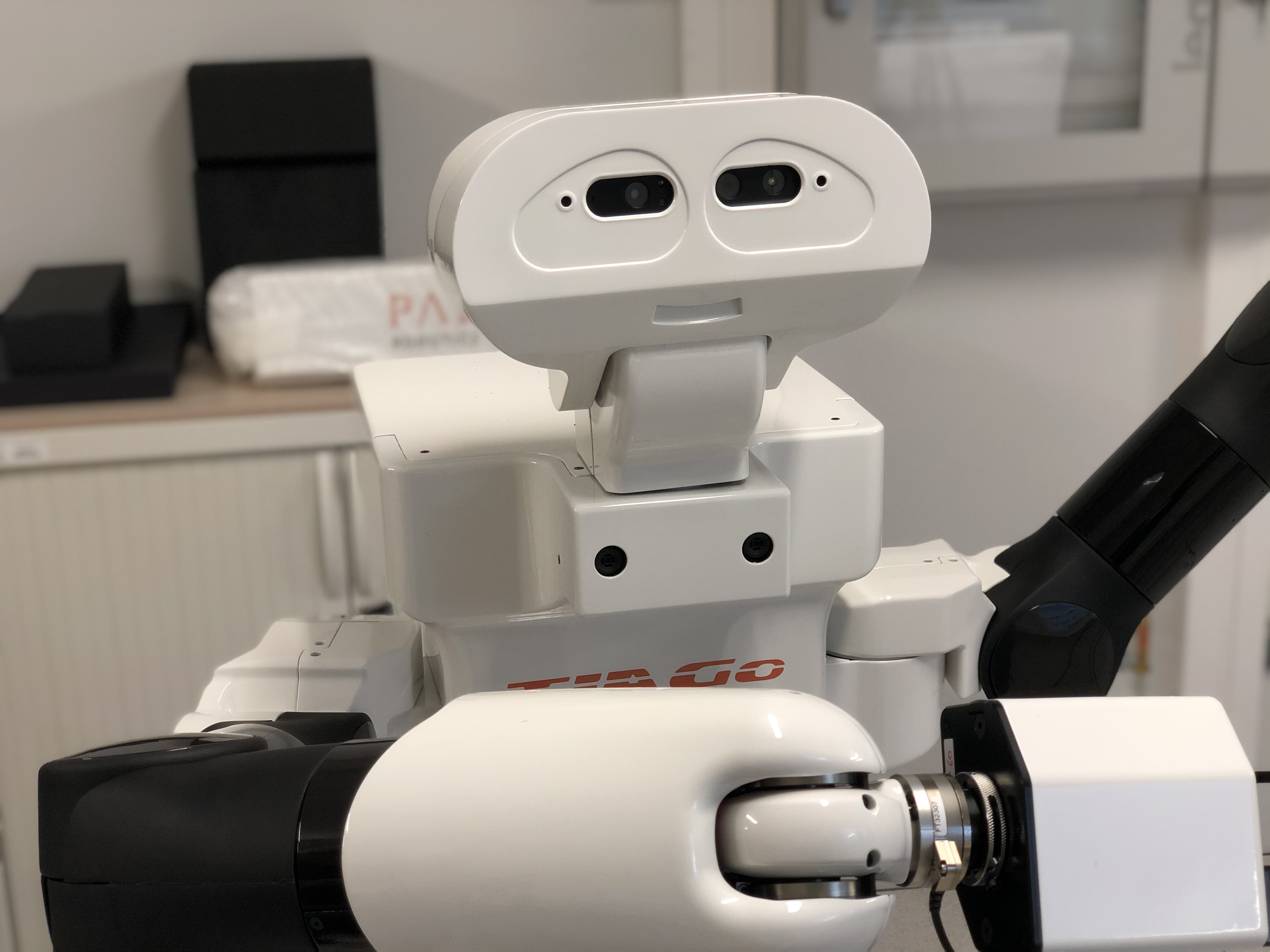 Could you tell us a bit about AGIMUS?

Nicolas Mansard (N.M.) : AGIMUS is a collaborative EU basic research project on robotics, bringing together 9 partners: the LAAS/CNRS, Inria, CTU Prague, PAL Robotics, Toward, Qplan, Airbus, Thimm and Kleeman. We are looking to implement new methodologies for generating movements on robots: for coordinating, scheduling and controlling robots, especially manipulators. Our overarching objective is to end up with robots working in industrial environments but which are designed to perform slightly less repetitive tasks than those normally assigned to robots. This includes tasks in smaller series, for example, or tasks with a lot of modularity or customisation.

Justin Carpentier (J.C.) : The aim behind the project is to simplify the integration of robots in general. At this moment in time there is still one major issue with robotics for industrial purposes: for any new task, a robot’s movements have to be reprogrammed in order for it to perform said task. This takes time, and costs quite a lot of money as well. Not only does this place serious limits on the use of robots for more precise tasks on a smaller scale, but there is also the issue of portability, given the somewhat rigid nature of factory environments. Our goal is to free robots from their bases, enabling them to navigate space. You can see this with Tesla, who have sought to reconfigure their factories for automobile production. This is really difficult to do without large numbers of engineers. The goal with AGIMUS is to simplify integration by using advanced machine learning or robotic control techniques.

Why did you want to do a collaborative EU project?

J.C. : It was chiefly to do with our field: in robotics, if you try to go it alone, you won't get anywhere. This is both basic research, at the intersection where different disciplines meet, and experimental research, where it is important for all laboratories to have the same experimentation platform in order to pool our strengths and to develop a common software program. Developing robot control software is a serious problem because it takes a lot of time. With the AGIMUS project, the aim is to bring people together around software for robotics so that everyone has the same tools and so that they are versatile enough to solve different tasks.

N.M. : Historically, there is the context of research projects in Europe - for a long time, the main EU calls for papers have been for big consortia. In robotics, these partnerships have often focused on joint integration: several teams pooling their skills in order to develop a demo. This encourages a range of different skills. The issue is that this can force multiple partners to work alongside each other on projects without necessarily seeking to link up development or methodology. Pooling happens during the demo stage, which acts as the flagship for the research project. This is something we are looking to move away from with AGIMUS, and which we previously tried to do with another EU project, MEMMO: we are working in reverse, trying to arrive at a common methodological framework which the bulk of our collaborative efforts will feed into, but working on our case studies separately. What we want is methodologies that everyone has worked on and which everyone is comfortable with and able to use independently.

We want to bring our methodologies to maturity so that other people are able to use them.

We are committed to transparency when it comes to research publications. In addition to our standard research papers, we will be publishing all software, data and models, properly documented, allowing other colleagues to reproduce and build on our work. This means ensuring our scientific production is of a high quality, and requires us to be more demanding and meticulous, but it also boosts the visibility of our research. Most importantly, this helps to make project partners more autonomous, making it possible to distribute applicative work and to partly autonomise the technology transfer process.

How will the project be divided up among all the different partners?

N.M. : We will be operating on multiple levels. Initially, between the academic partners the CNRS, Inria and CTU Prague: we will be working on putting in place new methodologies and new algorithms based on digital mathematics and artificial learning. The objective is to improve the behaviour of robots, to make them more dynamic, to make them safer and to give them greater precision, including through the use of sensor measurements.

There is then a second, more experimental level: our aim is for our methods to be used on real robots, which will be made possible through our partners PAL Robotics and Toward, who provide access to next-gen robots like the robot Tiago. This will allow us to deploy our algorithms on mobile manipulators. It is currently difficult to move away from the “standard” robot framework - a robot in a workshop, mounted on a table in an environment they are entirely familiar with - towards robots which are more lightweight, which are fitted with wheels and which require greater perception in order to be able to perform tasks effectively.

The third level is where we will be creating industrial models with three partners:

Some figures on AGIMUS

months spent putting the project together

How did AGIMUS come together?

J.C. : All of the partners involved shared common interests. Nicolas (Mansard) was in charge of a previous EU project MEMMO (Memory of Motion), which studied the foundations of what will be used in AGIMUS: digital optimisation and supervised/unsupervised learning for legged robots, and robot walking, through the use of sensors. AGIMUS can be thought of as a continuation of MEMMO. Some partners had been involved previously. When it came to putting together the project, unlike with MEMMO, we had support from an external service provider, Qplan, a company based in Greece, which was responsible for coordinating the project and putting it together. They were the administrative coordinator, essentially the project manager. The partners all have complementary skill sets, and so the aim is to ensure that they all work well together.

N.M. : EU projects are very structured projects. The European Union imposes a framework based on short deadlines and deliverables roughly every three months, as well as three evaluations by experts from the European Commission over the course of the project. To ensure the success of the project, we have a Coordinator, a Technical Manager, a Financial Manager, an Administrative Manager and a Communication Officer, and there is an evaluation structure within the project. Everything was carefully planned out when the project was being put together. We know, for instance, that our work is divided into 8 batches. But because this is basic research, we know we will need to be flexible when it comes to adapting certain deadlines. The challenges facing companies are completely different from those facing science. We have different ways of operating, meaning it's essential to establish a framework in order to be able to work together effectively.

Do you have any advice to give on putting together an EU project?

N.M. : You have to be sure that the collaboration will be productive, and that there is a purpose to it, and you mustn’t neglect the structure of the project. Once you've established milestones and arranged deliverables, this will be extremely useful. When you’re in the thick of it, you'll know what you have to do. Even if nothing is set in stone, it's a very important guide. What’s more, the lever that we have - working with colleagues who get funding - and the activity scope are much bigger than with an ERC project, for example.

J.C. : As young researchers, it seemed unthinkable to present a collaborative EU project without a senior researcher, because we don’t have any training in coordination or admin. The project we presented - and which was accepted first time - wouldn’t have been as professional without the support of an external service provider to handle coordination, without the reputations of the institutes behind it and without Nicolas (Mansard)’s experience with EU projects. But it's worth the effort, and the sum of money is much bigger than with an ANR (French National Research Agency) project, for instance.