Date:
06 Jul. 2020
Changed on 06/07/2020
The 3DMedifix project was initiated to meet the needs of healthcare personnel, in particular to produce lightweight transparent visors for emergency use. The visors complement existing protection and can be worn over FFP masks to further protect the face from possible projections. The project used the 3D printing software IceSL developed within the MFX project team: the scientists modified the 3D printable visor model validated by the local hospital (CHRU) in order to considerably reduce manual operations and to be able to produce it continuously, with 3D printers running around the clock. Thus, it was possible to meet the demand of hospital services, complementing the spontaneous initiatives of many Makers. 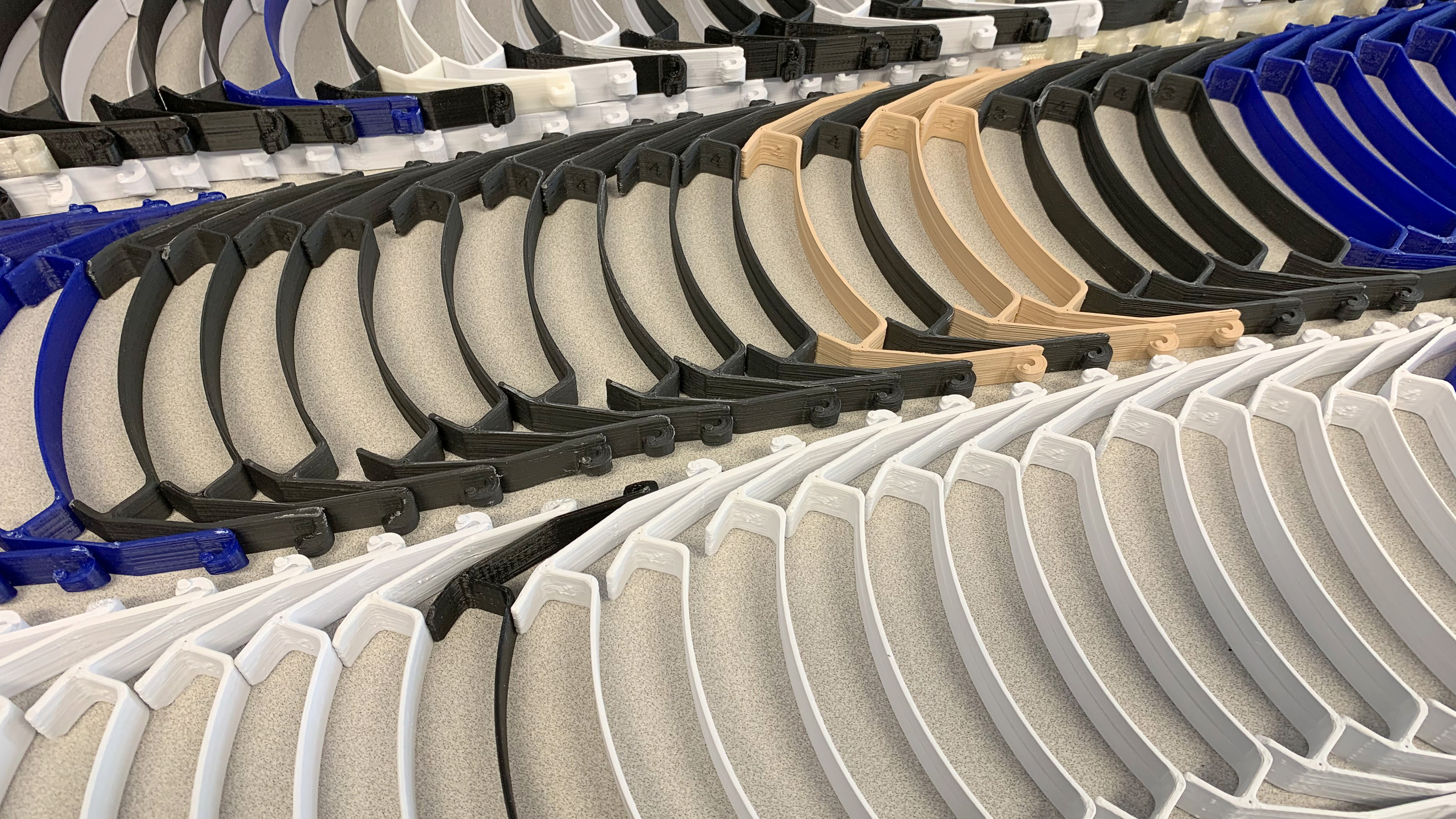 How did the project come about?

The project spontaneously emerged out of a desire to mobilize expertise and help healthcare personnel and patients. A watch on all projects involving 3D printing was initiated by Pierre-Alexandre Hugron, engineer with the MFX team, common to Inria and Loria. This triggered a reflection within the team, and very quickly a discussion group was formed with colleagues from the Grand-Est Region and beyond. The difficulty was to understand what could really be useful to the healthcare personnel. The manufacture of visors soon appeared to be a solid lead, thanks in particular to the numerous contributions of Makers and FabLabs around this idea. Worldwide, but also locally via the FaceBook group "Meurthe et Moselle Visière Covid19 " which spontaneously organized itself around the CHRU. At the same time, many contacts were made, via colleagues from the Ecole des Mines, but also via Sébastien Rimbert, PhD student in the Neurosys team, common to Inria and Loria, and whose research is partly carried out at the hospital. Very quickly, a group is organized.

How did the project develop? What are its objectives?

"We got together with a number of partners, spontaneously and informally" (see list in the box below), explains Sylvain Lefebvre, Inria Research Director and head of the MFX team. He continues: "As soon as the need was identified and contacts established with the CHRU's Hygiene and Environmental Analysis Department (SHAE), we mobilized all the 3D printers and stocks available in the building - with, of course, the full support of our colleagues and management. To find the sheets that form the front part of the visors, the teams' administrative assistants provided us with a map of all their cupboards containing binder covers! (They were all great and responsive!). Céline Cordier, in particular, helped us to place all sorts of unusual orders in a hurry, such as the rubber bands that hold the visors in place! »

To ensure that the visors can be used in good conditions, the prototypes have been validated by Doctor Arnaud Florentin, head of the Hygiene and Environmental Analysis Department at Nancy University Hospital. It is for this reason that the project leaders limit the supply of visors to medical staff, who know how to disinfect them, use them, and manage any risk of contamination. It is moreover the CHRU which organized the collection by coming daily at the research center to recover the visors produced by the group.

"The first visors were produced after 24 hours," says Sylvain Lefebvre.  "In barely a week and a half, we had printed 1700 of them with the group, and made five successive improvements to the 3D model. A true mini-factory distributed among all the partners! We were surprised to have printed so many! At the end of 15 days, 2000 visors were provided to healthcare personnel. »

The objective of the project was to respond to the emergency in the short term. Thanks to all the good wills, the goal was achieved!

The team also joined another project led by the Mimesis team, located in Strasbourg and directed by Stéphane Cotin. "The Nancy CHRU wanted to explore the Décathlon mask adaptor track," explains Sylvain Lefebvre. "But as hospitals don't necessarily all have the same equipment or the same uses, we accompanied the Nancy CHRU. Using elements brought by their services (biomedical, resuscitation, hygiene) and the work of our colleagues in Strasbourg, we tested adapters, valves and non-return valves. We have also worked on the tightness of the adapters (by adjusting them and changing the way they are printed in 3D so that there are fewer possible leaks in the fittings). So far all this has not been deployed. Tests have revealed some areas for improvement, and above all the urgency has fortunately diminished somewhat."

How did you work with your partners?

"We coordinated very quickly thanks to Quentin Helaine, a graduate of the École des Mines de Nancy and a research and development engineer at the school's Techlab. He was the one who coordinated the exchanges with the CHRU and all the partners on the issue of visors. In concrete terms, we used our software to optimize production. The functionalities of IceSL also allowed us to quickly modify the mask adapters. We tested dozens of variants! We also interacted with a local industrial partner, Ateliers Cini, to carry out 3D printing tests on their machines. They immediately responded and mobilized a team! This allowed us to test the whole range of possibilities.”

And Sylvain Lefebvre concludes: "It was a great human adventure, very different from our typical projects. It was a totally improvised initiative, but it worked very well, because everyone had the same objective: to try to help caregivers and patients! »