Date:
10 Sep. 2019
Publish on 31/03/2020
Most brain-computer interfaces detect modulations in brain activity using an electroencephalogram, and then analyse these modulations to control the computer. Given that hypnosis is capable of modifying a person’s state of consciousness, could it be used to intensify this modulation and hence facilitate communication between brain and computer? When Inria researchers set about tackling this question, they concluded that the answer was no. 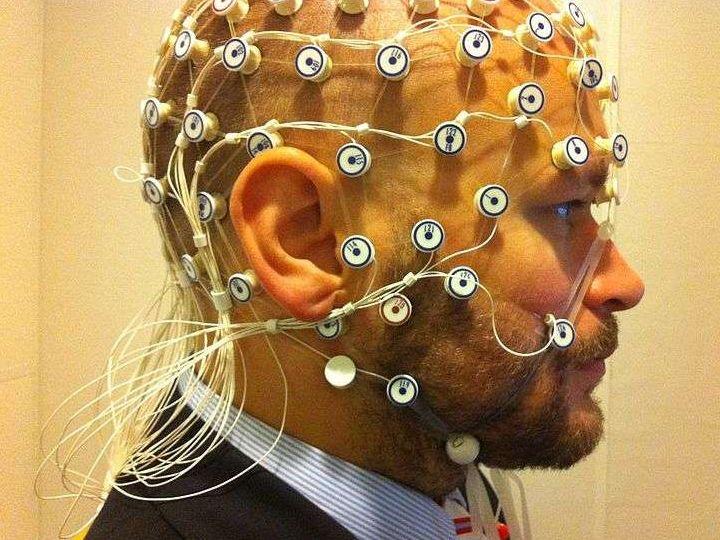 “Whether we’re moving, watching someone else moving or just imagining moving, some of the same neural networks are activated: those in the primary motor cortex”, explains Laurent Bougrain, head of the Neurosys team, a joint undertaking involving Inria and Loria.

Much is known about neural activity and the location of neurons: the neurons in the left hemisphere of the brain control the right-hand side of the body, while those in the right hemisphere control the left-hand side. Beginning at the centre of the cranium and moving out towards the sides, the motor cortex houses the neurons used to control the feet, the legs, the body, the arms and the face. Currently, the majority of brain-computer interfaces draw on this knowledge, detecting modulations in neural activity in the primary motor cortex using an electroencephalogram (EEG).

“By studying brain activity, we can now determine whether a person is opening or closing their hand”,explains the researcher.“Collecting data on brain activity, pre-processing it and extracting the information we need enables us to associate a cerebral state with a computer action or an object guided by the computer”.

One difficulty is that for the modulation of the activity in the associated motor cortex to be as clear as possible, the person imagining the movement has to be totally concentrated. Correctly imagining the perceptions ordinarily felt during actual movement is not an easy task. To put it another way, just because a patient thinks that they are imagining a task accurately, doesn’t mean that the right neural networks will be activated. They might visualise the movement, for example, and activate the visual cortex of the brain instead of the motor cortex.

Do we achieve better concentration under hypnosis?

Could hypnosis be a possible solution to this problem?“Our initial hypothesis was that under hypnosis, individuals might be more concentrated on what they feel in their hand or their arm, generating a stronger EEG signal that would be easier to interpret,”explains Sébastien Rimbert, a PhD student within the Neurosys team.

This hypothesis was based largely on accounts given by hospital staff, who have said that under hypnosis, patients who have suffered a stroke found it easier to imagine the movements they were being asked to do. The researchers then sought to verify this impression and to scientifically measure the effect of hypnosis on the modulation of brain activity. Part of Sébastien Rimbert’s thesis deals with testing this hypothesis.

A specialist in Ericksonian hypnosis (a form of hypnosis that involves suggestions made to subjects in order to help them to relax and concentrate) carried out individual hypnosis sessions on 23 people, who then immediately tried to imagine closing their right hand without actually doing so. The experiment was then performed again, only this time without the prior hypnosis session. In each case, an EEG was used to record the modulations of motor neuron activity linked to the right hand.

“There were differences, but they showed that modulation is actually lower under hypnosis”, reveals Sébastien Rimbert. “With this slightly altered state of consciousness it might not be possible to be purposeful enough, or conscious enough, to generate a sufficiently strong signal.”

The researchers are set to continue with their work through the new ANR project ‘Grasp-it’, the aim of which is to use an EEG to determine whether or not motor imagination used in conjunction with other forms of therapy in rehabilitation centres might be capable of activating the motor cortex. They are also planning to study the concept of feedback in order to reactivate the sensorimotor loop.“If an individual correctly imagines that they are closing their hand, the computer screen will show them a hand crushing a water bottle, thereby providing visual feedback. In addition, in their hand they will have a water bottle which, via a vacuum system, will be crushed when they imagine the movement, adding sensory feedback to movement imagination”, explains Laurent Bougrain. The overarching objective is to improve rehabilitation while also improving the performance levels of brain-computer interfaces.