TRACME: a paradigm shift for the modelling of complex systems

Date:
02 Apr. 2020
Changed on 26/05/2021
The mission of the TRACME* project proposed by Nicolas Brodu, a researcher with the GEOSTAT project team, is to develop a new way to model the behaviour of complex systems in order to increase the understanding of these systems. In April 2019, Inria selected the project to be included in its new programme of exploratory actions featuring projects that pose a scientific risk and require a broad multidisciplinary approach. 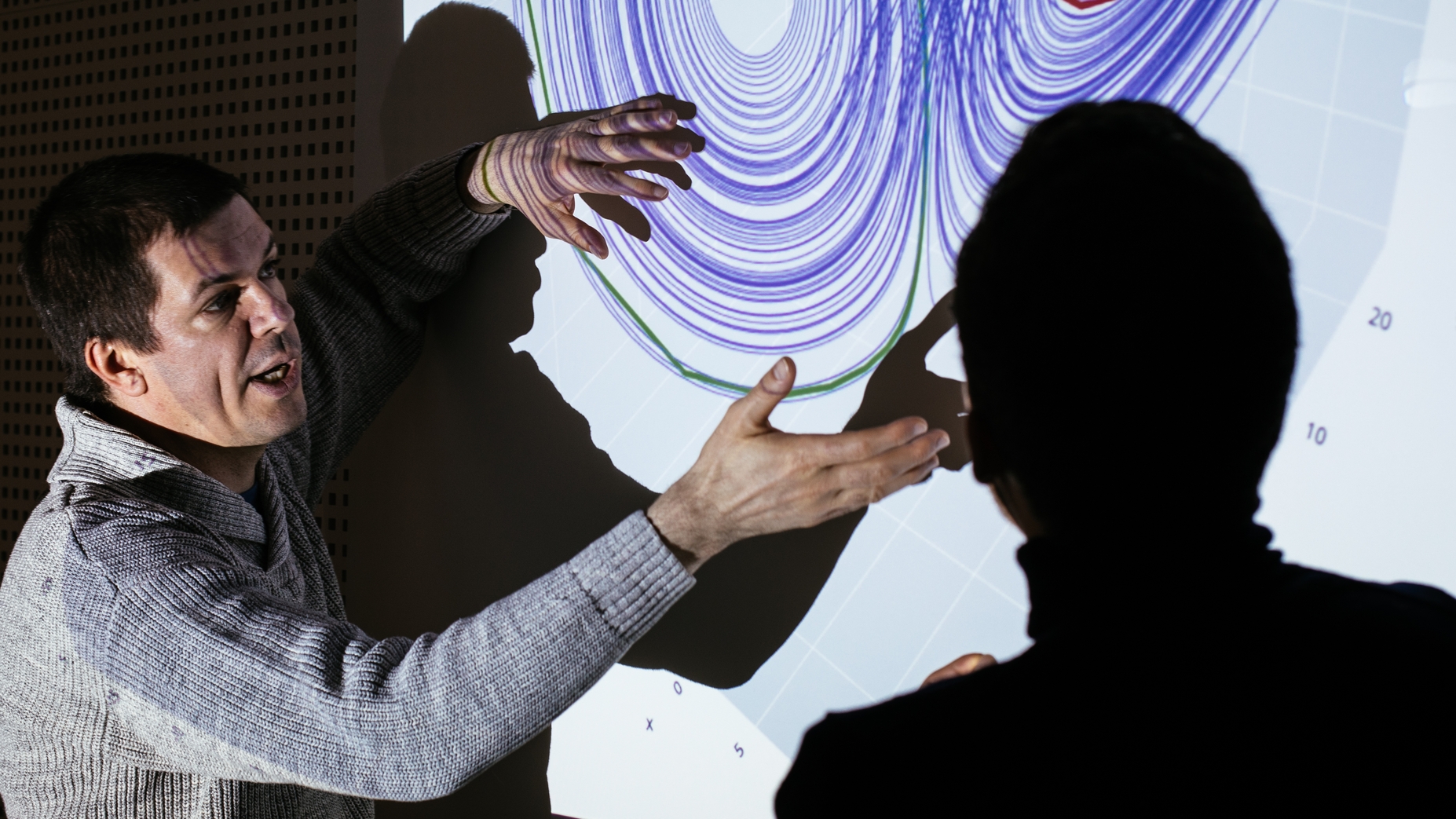 Take an example of a complex research object, such as a volcano emitting smoke. This behaviour results from interactions between several elements, each of which have their own temporality and weight within the system in question. Ideally, in order to understand this type of object, researchers should be able to monitor each element involved in the overall behaviour–the magma’s temperature, the percolation of rainwater, the network of fumaroles releasing smoke–and many other parameters that cannot be accessed or that we do not even know exist. Finding relationships between these elements, the repeating patterns, requires the creation of a model of the system. But the current predictive tools, based on deep learning, primarily function as black boxes: they use measured data to obtain a prediction about a system’s future development. However, this prediction is purely phenomenological or descriptive. In other words, it cannot be used to establish correlations between upstream and downstream data. To find the underlying causes, we must change the way the system is modelled. How can this be done? By injecting a minimum amount of physical knowledge and connecting the model’s dynamics with those of the mechanisms involved and the way they interact.

The search for causal relationships

Nicolas Brodu’s project aims to develop a new type of predictive model that will maintain this physical aspect and improve our understanding of how the system functions. This system would also identify the “causal” states. This refers to states that always lead to the same type of behaviour whenever the object is present. Modelling would involve describing the dynamics of these states probabilistically, based on the observed data. What are the relevant measurements? What do these states refer to? At which scales should the system be modelled? Whether for use in volcanology, the field of brain-machine interfaces, the modelling of movement in a crowd, or industrial maintenance applications, the answers to these questions all require close cooperation with specialists in the field. These discussions allow researchers to determine the parameters that must be measured to ensure the collected date is representative of internal states of the system in question. This is because the main objective is to provide researchers with new tools that help better understand the dynamics of the objects they study. And their only hope for competing with or even surpassing the current black boxes is to have well-constructed models, designed with support from specialists providing their knowledge of the field.

Being a pioneer, pursuing breakthrough innovation…

The idea of using a system’s internal states to predict its future behaviour is not new. This is Jim Crutchfield’s area of expertise. The researcher from the University of California, Davis, accepted to join the TRACME project. In the 1980s, he developed algorithms that are adapted to this modelling if the data are in series of countable, finite values. He proved that, in theory, the use of these causal states represented the best predictor of a system’s development. But while these models may be elegant, they are also very complex computationally. And using them to calculate causal states based on measured volumes in real systems often requires major approximations, which destroys a significant degree of their predictive power... In reality, better predictions can be obtained by using more simple models that can be calibrated using data.

The objective of the TRACME exploratory action (AEx) is to move beyond this state of affairs and model the internal causal states for continuous data. This will require the use of a new mathematical formalism to establish the causal states, which can be used to obtain completely different algorithms. Nicolas Brodu explains that to do so:

We must draw from machine learning, statistical physics, and equations that can describe a system’s behaviour in a probabilistic manner...

But also from the field of... finance. This is because the algorithms used to model the random aspects of markets are well-suited to the study of dynamic systems that are not deterministic in their development.

Therefore, in addition to finding applications based on knowledge from a wide range of fields, another major characteristics of the TRACME project is its broad multidisciplinary approach in terms of methodology.

Nicola Brodu’s experience is a major asset in the pursuit of this interfacing. After completing a thesis where computer science was used to understand the behaviour of complex systems, the versatile researcher went on to study the brain at a geosciences laboratory, the processing of satellite images, and the modelling and measurement of forces in granular environments. He then took on the role of physicist, publishing articles in this capacity in specialised journals. These experiences provided him with direct insights into the issues faced by researchers from several fields, and he was able to apply his knowledge of algorithms. This is a very productive scientific approach, from someone who believes that “a multidisciplinary approach does not mean being caught in the middle of an issue, but being able to understand the points of view of those on either side.”

So what are the industrial applications and possible social impacts of this exploratory action? For now, it’s too early to say. Although Nicolas Brodu developed an initial mathematical approach, which served as the basis for submitting his TRACME project, the project was only just selected at the beginning of the year. The first step is now under way, that of recruiting a PhD student who will start in October and spend six months studying at UC Davis (California) to receive training in the basic techniques of statistical physics, dynamic systems and complex systems with Jim Crutchfield’s team. The objective may not be reached for another three years, but in the long term, a new type of interpretable model with good predictive capabilities could prove to be a precious asset for numerous scientific and industrial applications. While competing models simply aim to predict a behaviour, without physical understanding, TRACME intends to provide an understanding of the system’s level of complexity, or at least its activity. This is the typical example of a high-risk research initiative with a major potential gain.

A programming enthusiast since the age of 13, Nicolas Brodu first worked as an engineer in the aerospace industry before defending his thesis on complex systems at Concordia University in Montreal. He was quickly drawn to the natural sciences and conducted post-doctoral studies with the ANR OpenVibe team at Inria Rennes, where he worked on electroencephalogram (EEG) signal processing to create brain-machine interfaces. He then joined the hydrogeology laboratory and went on to conduct two post-doctoral programmes on granular flow, first at IPR Rennes and then at Duke University in the United States. After returning to France, he conducted postdoctoral studies at Inria Bordeaux in 2014 focusing on image and signal processing, and was then recruited as a research fellow for the GEOSTAT project team in 2016.