Date:
30 Nov. 2017
Changed on 31/01/2020
The Larsen team from the Inria centre in Nancy is developing - in partnership with the Institute of Movement Sciences (CNRS & Aix-Marseille University) - miniature and semi-autonomous robots capable of exploring the inaccessible areas of monuments and leaving a minimum of traces behind. 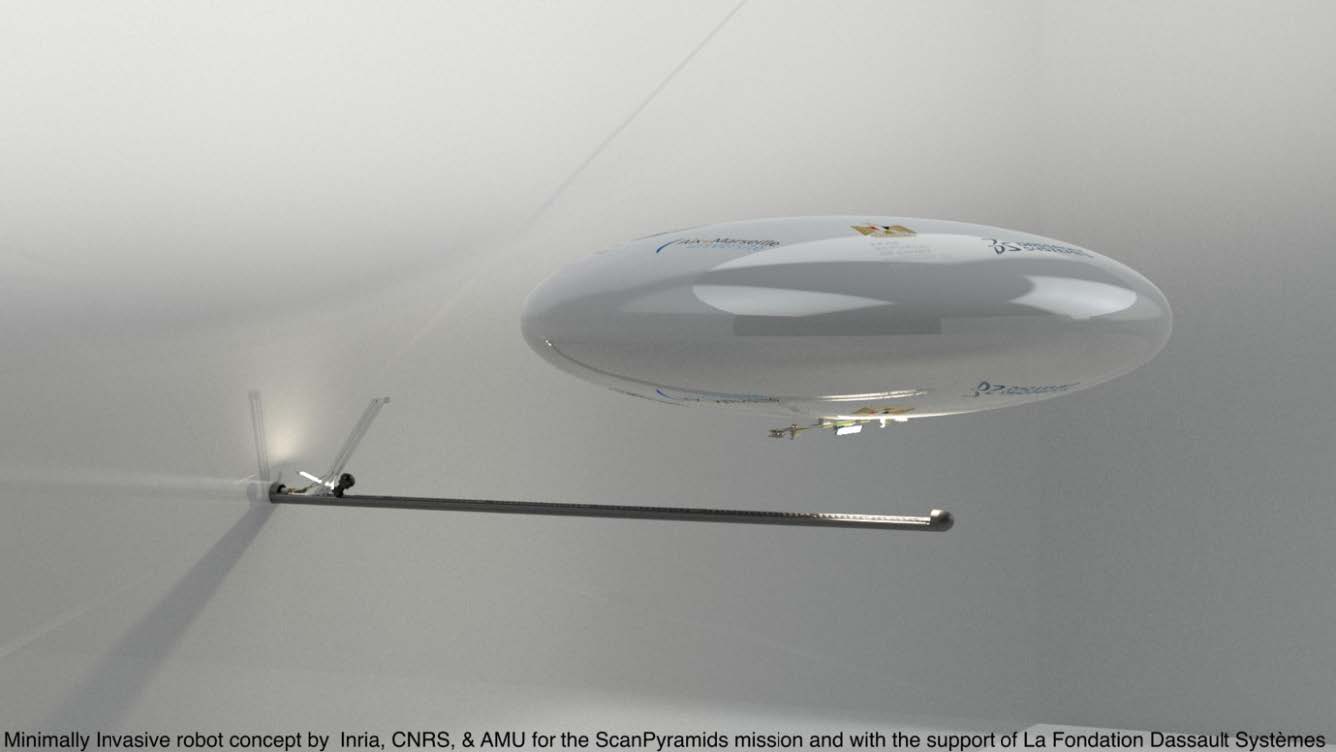 The ScanPyramid project recently caused a sensation: in the prestigious journal Nature, a team of researchers bringing together numerous scientific partners including Inria revealed the existence of a big void within the Khufu (Cheops) Pyramid in Giza. However, one question still remains: how can cavities of this kind in monuments (pyramids, painted caves, monuments from the Antiquity, etc.) be explored leaving as few traces as possible?

This is precisely what the robots developed by Jean-Baptiste Mouret (member of the Larsen project team) and his collaborators could be capable of doing: “They are minimally invasive robots, capable of getting inside holes of 3.5 cm diameter through stone several metres thick, with the aim of exploring inaccessible cavities or corridors”, the researcher summarises. An idea that was born during the ScanPyramids project, in which the Larsen team has been taking part since September 2016. “Even if we did not directly participate in the measures that enabled the identification of the famous cavity, the project made us aware of the type of environment and constraints in which these robots could evolve”, Jean-Baptiste Mouret who, in archaeology, has found an ideal testing ground, continues: “It is a fascinating application for any roboticist. It forces us to design an extremely reliable robot which is autonomous in the event of a problem and capable of evolving in a hostile environment...It is almost comparable to the robots sent to Mars!”

A remote-controlled mini-airship inflated with helium

The Larsen researchers are currently developing two further robots. The first, made up of a tube housing a rotating camera, will be able to conduct a preliminary inspection by providing a high-definition panoramic view of the cavity. If required, the second robot will then carry out the actual exploration. For this robot, the researchers are opting for the concept of a remote-controlled mini-airship which, after having been inserted through the same hole, could be inflated with helium in order to navigate around the rooms. “The fact it can fly makes it possible to overcome all of the obstacles on the ground that make exploration complicated, such as stairs or debris”, Jean-Baptiste Mouret explains. Tiny quadrotor drones are also conceivable; however they present serious challenges with regard to autonomy and stability in flight, compromising the taking of clear photos. “A mini-airship, on the other hand, does not require engines to keep it in the air, has good stability and better safety with regard to the monument as the risks linked to a collision are lower”, the researcher underlines.

Nevertheless, such an approach requires major challenges to be addressed, such as the integration of an array of sensors, mechanical systems and an inflation system in a capsule that is only three centimetres long. To overcome these, the Larsen team has already developed several prototypes and multiplied test flights. Using an interdisciplinary approach very dear to Inria, the robot and the sensors - essential for the semi-autonomous orientation of the robot - are developed in close collaboration with the Institute of Movement Sciences (CNRS - Aix-Marseille University). Franck Ruffier (Biorobotique team) and his colleagues have a solid expertise in 'bio-inspired' sensors, imitating the ability of flies and bees to fly in an obstructed space whilst using very low cognitive capacities. These sensors work by measuring the speeds of the objects on the retina, simple algorithms then making it possible to get into position depending on each of them without having to resort to imposing 3D processing. “Embedded in the drone, these sensors would enable them to find their way in space and to land accurately on the docking station, even in the event of a loss of contact”, Jean-Baptiste Mouret predicts.

In the medium term, these robots could become even more autonomous thanks to the artificial intelligence algorithms developed at Inria by Jean-Baptiste Mouret. In May 2015, he shared the cover of Nature thanks to his work on resilient walker robots, capable of rapidly 'improvising' new ways to move after having lost the use of one of their limbs. Even if no applications have been recorded within the scope of the ScanPyramids project for the time being, these new-generation robots bring hope for archaeology: “When these technologies are ready, it will be possible to investigate all types of historic monuments, and not only the pyramids, as soon as the opportunity arises and the authorisations are in place”, Jean-Baptiste Mouret predicts.