Date:
03 Apr. 2019
Changed on 11/03/2021
Built on cooperation between researchers in biological fluid dynamics, mathematical modelling specialists and doctors, the Reo project team came to an end in December 2018. This is an opportunity to look back on the research into congenital heart diseases and liver surgery that Irène Vignon-Clémentel, senior researcher at Inria Paris, conducted over more than 12 years in that multidisciplinary team. 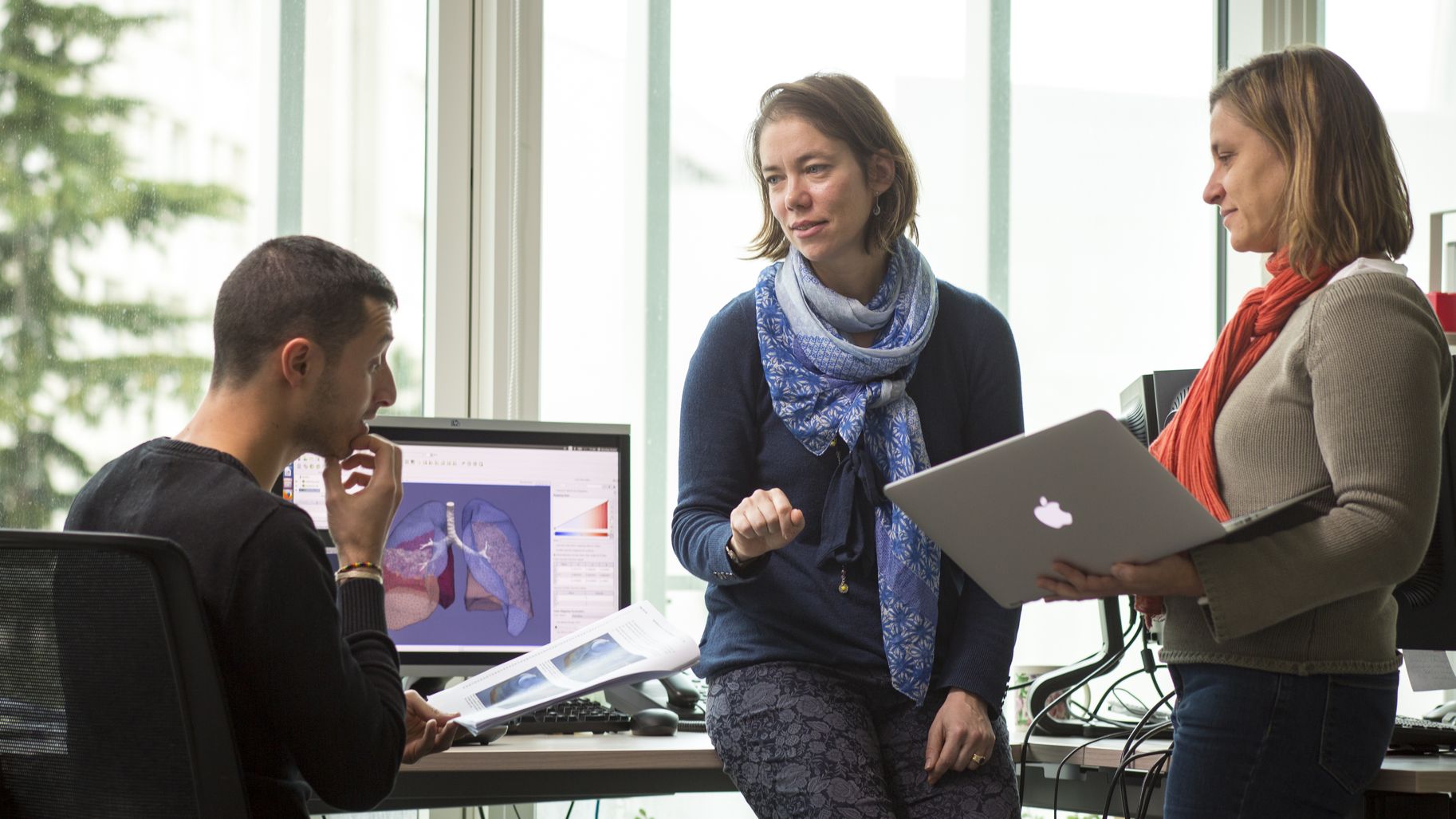 Understand and predict the impact of a surgical intervention using mathematical models and numerical simulations capable of precisely reproducing the procedure's impact on the cardiovascular system. That was the goal that Irène set for herself when she joined the Reo project team in 2006.

It was after completing her thesis in mechanical engineering at the prestigious Stanford University in America that she decided to join the Inria Paris project team. Since then, this specialist in biological fluid dynamics has formed fruitful partnerships with other Inria teams and foreign biomechanics laboratories with complementary expertise. Several surgeons and cardiologists receptive to the methods of numerical modelling have also launched partnerships with her team.

The scientific projects that I run in these areas always begin by asking a doctor about the potential effects a surgical approach may have on the vascular system.

Through a partnership begun during her thesis with Professor Jeffrey Feinstein, an interventional cardiologist at Lucile Packard Children's Hospital Stanford, Irène initially focused on single ventricle defects. This congenital malformation is the existence of a single ventricular chamber. It requires several early surgical interventions to restore circulatory function in the newborn. "By combining physiological data collected in young patients with mathematical models, we succeeded in simulating blood flow in the large vessels ," explains the researcher. "Even if the issue of confirming our predictions is still complex, they show that it is possible to anticipate changes in arterial or venous blood pressure due to the operation. "

IMPROVING THE DESIGN OF A CARDIAC IMPLANT

The tetralogy of Fallot accounts for around 10% of congenital heart malformations. To treat this disease which often leads to pulmonary valve insufficiency and right ventricular outflow tract dilatation, Professor Younes Boudjemline, then interventional cardiologist at Hôpital Necker-Enfants Malades children's hospital, came up with an innovative medical device.

It combines a reducer for the pulmonary artery at its origin in the right ventricle with an in-built valve. Given the risk of a fall in blood pressure associated with this interventional strategy, Professor Boudjemline turned to Irène and her team to explore the design of the implant so as to anticipate the risks of placing it in patients. "Using numerical models, we determined that it was better to perform pulmonary artery reduction and implant placement simultaneously, " observes the researcher. "Our simulations also showed that if the implant were to slip it would happen against the flow of blood. This might influence how the cardiologist needs to anchor the implant. "

AN EXCITING NEW FIELD OF STUDY

Since 2012, Irène has also launched a research project on liver surgery in tandem with the team of Professor Eric Vibert, a liver surgeon at Hôpital Paul Brousse in Villejuif. The goal of this new area of research is to understand the effect of partial liver resection on liver vascularisation and function. The technique is used in the treatment of diseases such as cirrhosis and liver cancer.

Currently, this surgical intervention mainly relies on empirical considerations, for example the need to preserve a minimal liver volume that equates to around 0.4% of the patient's body size. Irène's new area of research aims to predict changes in blood pressure and blood flow in the highly vascularised liver as determined by the surgical plan being envisaged.

Launched as part of a French National Research Agency project, the work will be carried on by a new Inria project team that the researcher is setting up.

"By using preoperative data from patients with cirrhosis or liver cancer and combining it with mathematical tools […], partial resection could be conducted based on the physiological characteristics of each patient, "she says. "Even though this new research topic is forcing me into unfamiliar territory, it is still just as exciting.  "