Date:
07 Nov. 2019
Changed on 25/03/2020
Experts in virtual reality celebrate 20 years of the Immersia platform.
Between 9am and 1pm on 7th November 2019, academics and financial backers came together at the Beaulieu campus to celebrate 20 years of the Immersia platform, a symbol of Rennesí excellence when it comes to research into virtual reality. 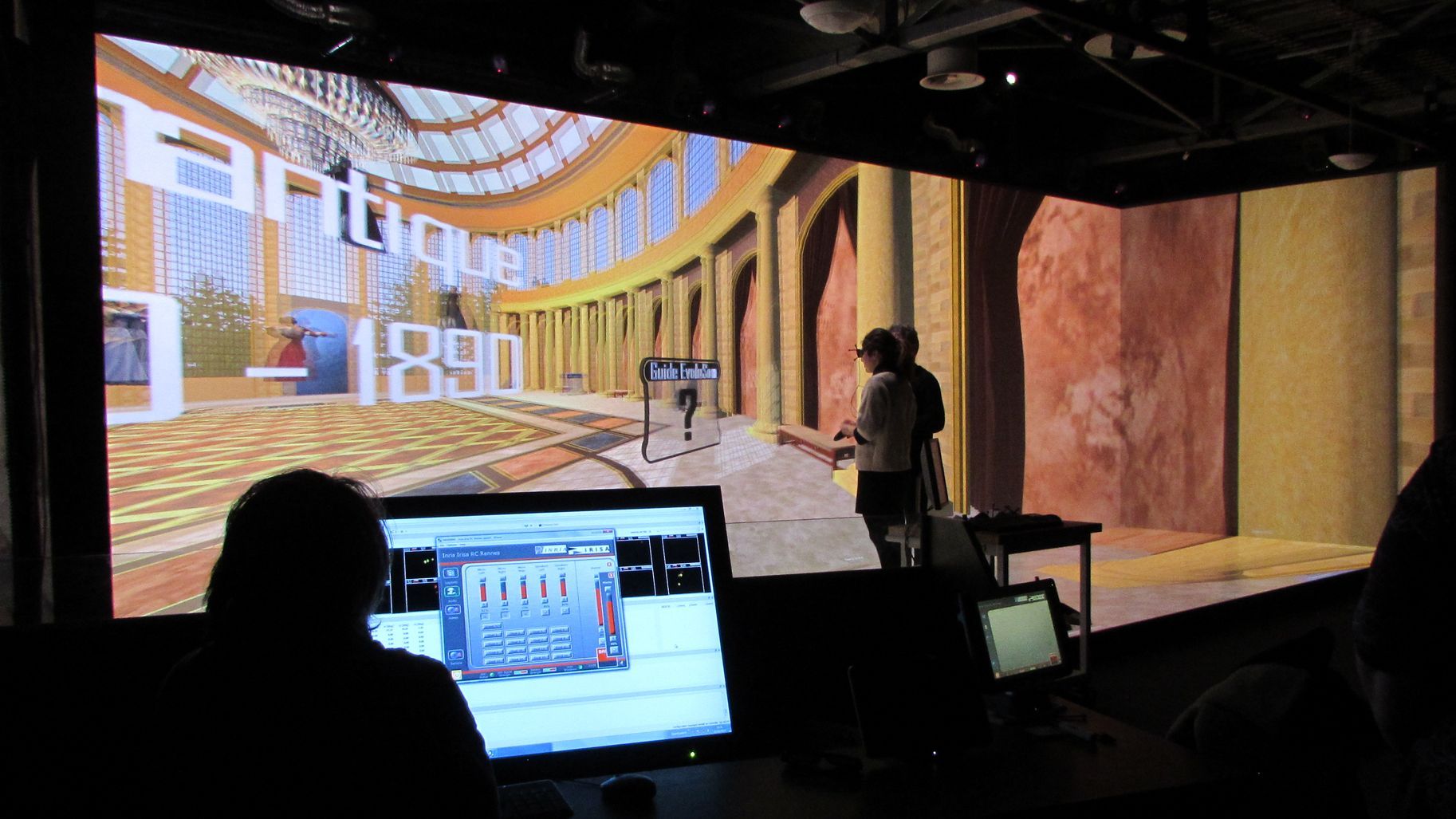 A pioneering platform in France

In 1999, Immersia became the first virtual reality room launched by a French research laboratory, the IRISA, working in collaboration with the Inria Rennes - Bretagne-Atlantique centre. A cutting-edge technological asset, this vast platform (10 m x 3 m x 3 m), installed on the Beaulieu campus of the University of Rennes 1, provides an experimentation environment to rival anything available worldwide, particularly in the context of immersive interaction, whether in real-time or multimodal (motion; visual, audio and haptic feedback; brain-computer interface), between human beings and a computer-synthesised 3D environment.

Since 2015, Immersia has been linked to Immermove, a motion capture platform, which has been extended through the addition of a virtual reality system. This platform, which has been installed at ENS Rennes on the Ker Lann platform in Bruz, is capable of capturing rapid movements (in sport for example) or groups of people in precise detail, the goal being to analyse movements of crowds.  Through Immermove and Immersia, Rennes now boasts a first-rate immersive and collaborative space named ImmerStar, which is targeted at the scientific and industrial community. Helping to boost the appeal of the region, Immerstar can be used to develop innovative projects on a scale ranging from the city of Rennes to the whole of Europe.

Applied in fields such as medicine, archaeology and cinema

In the medical sector, the LTSI and Rennes University Hospital, in partnership with teams from the IRISA and Inria, are assessing the organisation of teams of carers in learning situations (Labex CominLabs). What is needed to train theatre nurses immersed in a virtual reality brain surgery room? What happens when a real-life human being hands the virtual scalpel over to a virtual human being?  In archaeology, the sizeable community in Rennes, centred around the CReAAH laboratory and the Inrap, via its Grand Ouest interregional directorate, is able to benefit from the sheer size of the room when it comes to viewing full-scale reconstructions of historic buildings. The Cairn of Barnenez, the Temple de Mars in Corseul and the Jeu de Paume in Rennes have all been scanned by archaeologists before being modelled by teams from the IRISA and Inria. Being able to reconstruct virtual environments based on these scans is a real asset when it comes to verifying hypotheses made by archaeologists, while raising various different research questions for experts in virtual reality. In cinema, meanwhile, Immersia has also been used to test solutions for delivering special  effects directly to film sets. Through their research, we can imagine a future where actors no longer have to rely on the green screen, instead interacting in virtual reality with characters and special effects added to the film during post-production.

At the end of the 90s, Bruno Arnaldi, Georges Dumont and their team from the IRISA and Inria had already been studying virtual reality for a decade or so when they first became aware of the existence of a specific platform for this research at a university in the USA. They launched a project to set up a similar platform in Rennes, with support from IRISA management, the Inria centre, their parent bodies and funding partners, who would go on to support its development over the course of the next twenty years. In 1999, the very first version was fitted with a semi-cylindrical screen, lit up by tri-tube projectors (red, green, blue). Successive improvements were made to Immersia in order to ensure that the equipment on offer remained cutting-edge, the goal being to maintain the quality and competitiveness of the research carried out in Rennes into virtual reality. In 2011, the platform opened up a new, bigger room, enabling them to study user movements. Three glass screens (the biggest of which is 10 m wide) are backlit using projectors (laser technology has been employed since 2017). Images of virtual environments are projected at 120 images/second, more than four times the frequency used for cinema, in order to retain a degree of fluidity, even when users are in motion. Immersia has held on to its position as a unique asset in Europe, with two haptic arms capable of being used across the platform added in early 2019. New fields of research are opening up, as they seek to analyse reactions and human movements, in both real and virtual conditions. Multiple-partner projects and research excellence Since 2013, Immersia has been headed up by a committee made up of representatives from the CNRS, the ENS Rennes, Inria, INSA Rennes, the University of Rennes 1 and the University of Rennes 2. The platform operates through two research engineers. It plays host to the work carried out by around sixty researchers, engineers and PhD students from both the IRISA and Inria: primarily the Hybrid (analysis of human interactions, in multi-modal and 3D environments) and Mimetic (analysis of movement and interactions between real-life humans and virtual humans) teams. In this way, Immersia is able to serve a range of research subjects within partner laboratories drawing on virtual reality in the UK, Italy, Denmark, Germany and Switzerland. In return, this research provides specialists from the IRISA and Inria with ìuse casesî, enabling them to identify and overcome scientific and technological barriers in virtual reality.