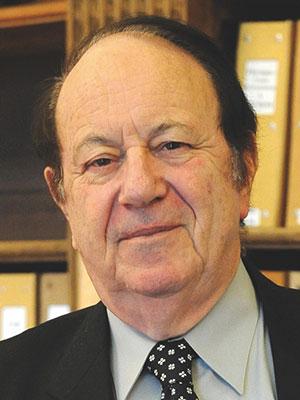 Born in Paris in 1937, the son of Polish Jewish immigrants hidden by French people in the countryside during the Second World War, Roland Glowinski showed early talent in various fields, particularly in mathematics and science. These skills led him to specialise in mathematics and to enter the École Polytechnique, from which he graduated in 1960.

However, it was not until the end of the 1960s that Roland Glowinski turned definitively to computer science and applied mathematics, following an advanced course at the École Polytechnique organised by Jacques-Louis Lions. He spent part of his early career working with Lions, who was head of the IRIA Laboria in 1970 (and who became the first president of INRIA from 1979 to 1984).

On the basis of his DEA work, Jacques-Louis Lions became his thesis supervisor; Roland then joined IRIA as a research director. In 1970, he obtained his PhD from the University Pierre et Marie Curie (Paris VI) with a thesis on the resolution of non-linear integral equations for the filtering of colour television transmission. After obtaining his degree, he was appointed professor at the University Pierre et Marie Curie and became scientific director of Inria.

He was someone I was extremely close to. He was a man with a lot of qualities, beyond his mathematical talents, he really had something extra.

"I am touched by his passing. He was someone who really meant a lot to me. I had really hesitated to go into research and it was the exchange I had with Roland that was decisive. He was very engaging," says Bernard Larrouturou, Chairman and CEO of INRIA from 1996 to 2003.

Concerned about the applicability of research results to technological problems, Roland was also a pioneer in the transfer between research and industry. His work on the approximation and description by finite elements of a shocked transonic flow around a fully configured Dassault Aviation Falcon 50 aircraft is an example of this, enabling an important and long-lasting collaboration between Inria and Dassault Aviation.

Roland was the soul of Building 16 (Inria Rocquencourt), he played a major role in the international influence of Inria and had a huge impact on our lives. He was the spiritual leader of many of us.

He remained at the institute until 1985, when he moved to the United States to take up a professorship at the University of Houston. "The most inspiring teacher I have ever had, he makes you want to study mathematics. It doesn't seem like he teaches undergraduates very often, but if he does, you should definitely take the opportunity to take his class," the RateMyProfessor website says of him.

At the same time, Roland maintains his secondment status at the Université Pierre et Marie Curie and is an advisor to numerous scientific institutions and agencies on both sides of the Atlantic. These include his role as a member of the scientific council of Électricité de France (EDF) from 1990 to 1996, as an advisor to IFP Énergies nouvelles (formerly Institut Français du Pétrole) from 1990, and as director of the Centre Européen de Recherche et Formation Avancée en Calcul Scientifique (CERFACS) in Toulouse, from 1992 to 1994.

During his career, Roland has written or co-authored nearly four hundred scientific papers, ten books, and has been editor-in-chief of more than twenty scientific journals and anthologies. He was invited to lecture at universities and scientific institutions around the world and was the keynote speaker at many scientific conferences.

Since the official announcement of his death, messages of sympathy have been pouring in on the networks. "A powerful and inspiring researcher for generations. Along with Jacques-Louis Lions and others, he also did a lot to promote links between research and business," says Armel de la Bourdonnaye, current director of INSA Hauts-de-France and former researcher at Inria. Quang Vinh Dinh, a research engineer at Dassault Aviation, said: "It is indeed very sad to learn of the death of Roland Glowinski. He was my thesis director and launched me into the first steps of HPC".

Inria sends its sincere condolences to his wife Angela Glowinski, whose unfailing support of Roland's career is well known in the scientific community.