The 2022 recruitment campaign for researchers is launched at Inria!

Date:
28 Jan. 2022
Changed on 07/04/2022
Would you like to participate in the advancement of research in the digital sciences as a civil servant or on contract throughout France? To take advantage of the variety of our research fields, our openness to innovation and our agile and partnership-based model, don't hesitate any longer: our 2022 recruitment campaign is open from 28 January to 1st March 2022. 57 positions open by competition (CRCN) or on permanent contracts (ISFP). Apply now! 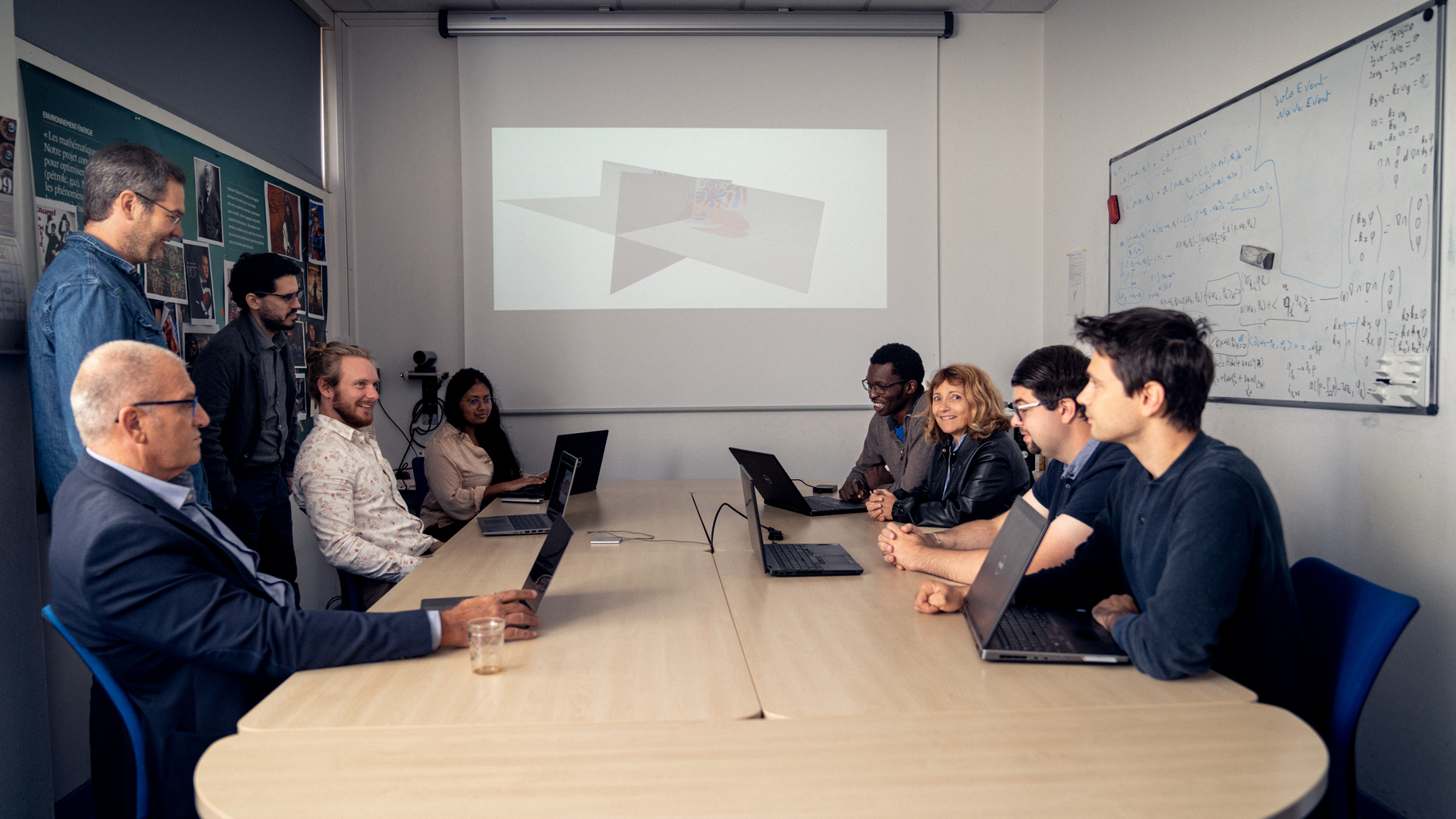 An agile and partnership-based institute

At Inria, we are developing a unique model, that of the project-team: teams on a human scale that are close to their hierarchy and to the institute's strategy, autonomous human and financial management, interdisciplinarity and an innovation policy that is integrated into research projects.

Composed of around twenty people, the project-team is organised around a scientific leader who sets research objectives in one of the Institute's fields. This original and effective group dynamic is supported by a network of services (IT, Inria Startup Studio, international relations, HR, logistics, legal and financial management, communication, scientific publishing, etc.). Thanks to the support available, each project-team is able to carry out its collective projects while encouraging the individual development of its members.

At Inria, we are also developing numerous partnerships and bridges for dialogue with society, whether it be the academic world, industry or our fellow citizens!

startups from our project teams

Startup Studio to accompany you on the road to entrepreneurship

nationalities within the institute

Inria Academy to train the engineers of tomorrow

Apply to the Inria centre at the University of Bordeaux

New Aquitaine is a dynamic region where it is good to work and live! Inria has been present in the region for 20 years and today employs more than 250 people at the university sites in Bordeaux and Pau, working alongside 180 people employed by our academic and industrial partners. The Inria centre at the University of Bordeaux groups most of these people around eighteen joint project teams with the university, Bordeaux INP, CNRS, Inserm, INRAE, ENSTA Paris and Naval Group. Inria also has a branch in Pau, attached to the Bordeaux centre, with two joint project-teams with the University of Pau and the Pays de l'Adour, the CNRS, Bordeaux INP and TotalEnergies.

The centre has three recruitment priorities in Bordeaux this year, notably in its newly created teams:

Grenoble, European Green Capital 2022, is located in a mountainous setting in the heart of the Alps. Surrounded by the massifs of Belledonne, Chartreuse and Vercors, Grenoble abounds in outdoor leisure and sporting activities. A city of history and culture, Grenoble is located, by train, 1h20 from Lyon and 3h from Paris. Its university, the Université Grenoble Alpes, is ranked among the 10 most beautiful European universities and welcomes more than 50,000 students.

The Inria Grenoble - Rhône-Alpes research centre's priority is to strengthen the following themes: computer systems, data and knowledge management, learning and applications, environment and responsible computing. The recruitment campaign is more generally open to all the research themes of the centre's teams, with priority given to recruitment in newly created teams or those in the process of being created.

Apply to the Inria Centre at the University of Lille

The Inria Centre of the University of Lille is located in the heart of the European Metropolis of Lille, a true crossroads of Northern Europe. This cross-border metropolis of more than 1.2 million inhabitants is at the crossroads of some of the most fertile European capitals for cutting-edge activities and digital science and technology. A City of Art and History known for its conviviality and festive atmosphere, its economy is also based on historic and innovative sectors of activity, whose heritage is now home to incubators for successful start-ups.

The centre has 15 project-teams located on two sites: at Haute Borne, a business park at the heart of the University of Lille campus; and at EuraTechnologies, within a pioneering entrepreneurial ecosystem in Europe. It interacts closely with local laboratories and research and higher education establishments (University of Lille, CNRS, Inserm, Centrale, Polytech Lille, Lille University Hospital, etc.) as well as with the economic players in the area. It is home to 365 scientists and research and innovation support staff, who together form an intercultural workforce of 30 different nationalities.

The research of our 15 project-teams covers a wide range of scientific topics (modelling, high-performance computing, robotics, artificial intelligence and human-computer interaction, etc.), with applications in fields such as health, aeronautics, the environment and education. As part of the launch of the new CRCN and ISFP recruitment campaign, we are looking for talents who will contribute to developing the scientific excellence of our centre, in four priority research areas: data science, software engineering, cyber-physical systems and digital health. The Inria Lille Nord-Europe centre has three recruitment priorities:

Apply to the Inria Lyon centre

Located at the confluence of the Rhône and Saône rivers, served by three train stations and an airport, Lyon, the ancient capital of Gaul, takes us back in time. Four of its districts have been listed as Unesco heritage sites since 1998. A cultural and artistic city, Lyon is also a major research centre in France, which has seen many historical figures pass through its doors, such as André-Marie Ampère and Claude Bernard, considered to be the father of experimental medicine. The University of Lyon has 36 member and associate institutions, 154,000 students and 172 laboratories.

The Inria research centre in Lyon has the priority of strengthening the following themes: digital health with the aim of developing new research areas in relation to hospitals in the city (applications from outside the team encouraged) and Artificial Intelligence in the context of distributed or embedded systems in the broad sense within existing teams. The recruitment campaign is more generally open to all the research themes of the centre's teams, with priority given to recruitment in newly created teams or those in the process of being created.

The Grand Est is a great place to live, with preserved landscapes and nature, and meaningful and valuable traditions. A true European crossroads and largely open to the international scene, its cross-border positioning contributes to its attractiveness. This region includes five historic cultural metropolises: Nancy, Metz, Reims, Mulhouse and Strasbourg.

Nancy, known for its architectural identity and its gastronomy, is a creative, cultural, sporting and student metropolis. Located near the Vosges mountains, it offers a wide range of outdoor activities. Resolutely committed to eco-responsible projects, it is ranked among the top 10 greenest cities in France. Situated 1h30 from Paris by TGV, Nancy is strategically located and offers quick access to major European cities. Finally, it is also one of the cities with the lowest cost of living.

Strasbourg, the Alsatian Eurometropolis, is one of the most attractive areas in France because of its economic dynamism, its mobility plan and its quality of life. With more than 600 km of cycling facilities, Strasbourg is a reference in terms of cycling!

Within this large region, Inria is represented by the Inria Nancy - Grand Est research centre, created in 1986. In 2022, the centre will have 20 project teams based in Nancy, Strasbourg and Saarbrücken. It brings together more than 400 people, scientists and research and innovation support staff, from 45 nationalities. Its scientific priorities are based on algorithmic intelligence and software-hardware interaction.

These priorities are chosen to be consistent with the "systems engineering" theme supported by the University of Lorraine as part of the I-Site "Lorraine University of Excellence". The centre also wishes to give priority to recruitment in newly created teams or those in the process of being created. The recruitment campaign is more generally open to all the research themes of the centre's teams.

The Inria research centre in Paris, in line with its site policy, has two recruitment priorities: quantum computing and artificial intelligence. The centre hopes that at least two positions open to competition will be assigned to teams working in these fields. The centre also wishes to give priority to recruitment in newly created teams or those in the process of being created. The recruitment campaign is more widely open to all the research themes of the centre's teams.

Apply to the Inria centre at the University of Rennes

Rennes is a must-see destination in Brittany because of its rich history and culture! It is also the largest student city in western France. With two universities and numerous higher education establishments and institutes, it is a major university and research centre. The Inria centre at the University of Rennes has 29 joint project teams. Its activities mobilise more than 600 people, scientists and research and innovation support staff, from 50 nationalities. The centre is also deployed in Nantes with the LS2N (Laboratoire des sciences du numérique de Nantes) and in Lannion.

The Inria centre at the University of Rennes is recruiting this software engineer for the DiverSE and STACK project teams!

STACK is a project-team specialised in software engineering based in Nantes, France. It is developing in an international and dynamic ecosystem located in one of the largest engineering schools in France. STACK is strongly involved in open source communities (Open Infrastructure Foundation, Cloud Native Foundation and Eclipse) and in relations with industry (joint team with Orange Labs, links with Ericson, Bull/Atos, Verizon, Orange, OVHCloud, Redhat, etc.). The project-team makes it a point of honour to guarantee a balance between scientific publications and practical contributions, by opening up to the international scene.

Created in 2008, the Inria Saclay Centre is located at the heart of the Paris-Saclay scientific and technological excellence cluster. The centre serves the development of the major world-class research campuses in digital sciences and technologies of the University of Paris-Saclay and the Polytechnic Institute of Paris. Located 20 kilometres south of Paris, the Paris-Saclay region brings together research organisations, grandes écoles, start-ups, universities and private companies; it is now the 8th largest cluster in the world and brings together more than 15% of French private and public research.

This privileged ecosystem greatly benefits the attractiveness of the region: the installation of large companies and start-ups, but also students who come from all over the world to take advantage of this synergy. The Inria centre in Saclay, together with its partners, the Université Paris Saclay and the Institut Polytechnique de Paris, has the following priorities: biology and digital health; AI and data sciences; cybersecurity, privacy, proof and verification; quantum.

In a few figures, the centre is also :

The centre wishes to give priority to recruitment in newly created teams or those in the process of being created. The recruitment campaign is more generally open to all the research themes of the centre's teams.

Apply at the Inria Centre at Université Côte d'Azur

Inria has been a key player in digital research on the Côte d'Azur since 1983. The Inria research centre at the Université Côte d'Azur has 35 project-teams and 8 departments, mobilising 560 people, scientists and support staff. The centre also has a branch in Montpellier, where it supports the development of the University of Montpellier and the dynamics of the Isite MUSE. In a privileged green setting, the Sophia Antipolis technology park is a place where science and technology meet, focusing on the quality of life and multidisciplinarity to federate energies to create the major innovations of tomorrow. Sophia Antipolis has become a true world reference in terms of innovation and R&D. Every year, more than 1,000 new jobs are created in key areas such as artificial intelligence, biotechnology, and autonomous and connected vehicles.

As a player in technological development and innovation, the Inria research centre carries out joint work with other academic players as well as innovation players (start-ups, SMEs, ETIs, large groups, local authorities, competitiveness clusters, incubators). The recruitment campaign is open to all the research themes of the centre's project-teams, around these priority scientific axes: