Date:
08 Mar. 2018
Changed on 27/01/2020
With a passion for probabilities, Coralie is a researcher with Tosca project-team at Inria. What she enjoys above all in her profession is the inter-disciplinary side of things. 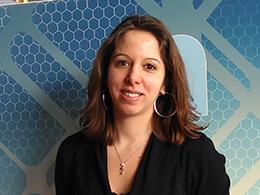 At 30, Coralie is now a researcher with Tosca project-team at Inria, which is located between Sophia-Antipolis and Nancy research centres. A team of mathematicians, based in fact at the IECL, the Lorraine Institute of Mathematical Research. Coralie particularly enjoys the interdisciplinary side of her profession. Just five months after joining the team, she is already involved in three huge projects.

Her first project, with INRA Champenoux, involves estimating (using statistics!) the rate of transmission of chalara, a disease caused by a fungus which mainly affects ash trees. To do this, she must consider various factors, such as the density of ash trees, the outside temperature and humidity levels.

A second project gives her the opportunity to work in the medical sector, alongside researchers from the Lorraine Institute of Oncology. Her passion for probabilities has led her to modelling cancer cells that are sensitive to targeted therapies – in other words, sensitive to treatments that target specific types of cancer cells with the aim of stopping their proliferation – and cells that are resistant to these therapies.

But probabilities have also led her to working on an even more surprising project, one which consists of modelling the spread of emotion in crowds, in particular in football stadia! Because, in the end, the type of model used is more or less the same as the spread of epidemics model! And for her research in this field, she’s working with a start-up from Lorraine.

The environment, biodiversity, medicine and football... at first glance it’s difficult to find a common denominator. But for Coralie, it is clear as day! For every case, she applies the same approach that she particularly enjoys: someone presents a problem to be solved, providing the context, and mathematics – in particular, probability – is what enables her to adapt the models to the problem in question.

What motivated you to get into science and, more specifically, digital science?

I had a keen interest in probabilities from an early age. After obtaining my Baccalaureate in Advanced Science in Metz, with a specialisation in physics and chemistry (for the applied mathematics side of things), and after completing the first year of my Bachelors in Maths, IT and Mechanics, I hesitated between maths and mechanics (the branch of physics concerned with the motion of bodies), but ended up choosing to continue with maths. One of my options for the future was to become a maths teacher, but circumstances led to me discovering other possibilities that I hadn’t even thought of! And so I decided to do the second year of my Masters in Toulouse in order to specialise in probabilities, with potential prospects in the aeronautics sector.

Back then, I hadn’t yet thought that there would be opportunities in the fields of biology or medicine, opportunities which I only discovered when I researched subjects for my thesis, but I really enjoyed aeronautics! I went to Montpellier for my thesis, which was funded by INRA. Using probabilities has enabled me to propose new chemostat and bioreactor models used to break down pollutants with micro-algae or bacteria.

Once I had completed my thesis, during which I spent three months in Helsinki working with an ecologist, I joined the Tosca team for a post-doc which took 16 months. I also tried my luck in the private sector, in a start-up that works in cancer research and was looking to have a modelling department within its team. Unfortunately, the firm let go of their biostatistics team for financial reasons before I joined the company.

I took part in the selection process for Inria researchers last summer. I really fought to get through since, out of all the positions I applied for, it was the one I wanted the most!

What do you think of the position of women in scientific professions? Have things changed at all?

Personally, I have never experienced discrimination for being a woman, but not everyone I know has been as lucky as me...

I have also noticed that more and more women are being employed in fields that were historically seen as masculine, and that is definitely a good thing! In my team, and to mention just the staff at Inria Nancy, parity has been achieved: the permanent positions are held by two men and two women. I work with the team BIGS a lot, which also has a lot of female members.

It is important to change people’s mentalities to allow women to play a greater role in the scientific world. But we also need to be careful not to fall into the other extreme and ensure that women are recognised above all as scientists!

Do you think that, even today, women tend to self-censor when it comes to careers in science?

I have never censored myself. It is true that when I started uni, I did think that maths was more of a masculine field, but that didn’t bother me. I didn’t have a specific profession or career in mind, I just wanted to study maths or a course related to applied maths. So that’s what I chose to do!

The mentality seems to be shifting in the right direction, and society is also changing to leave more room for women. But to do that, it’s important to communicate more with schools and students in order to avoid self-censorship and to inform about the opportunities that these pathways offer.