Date :
08 Dec. 2019
Changed on 02/01/2020
Explaining digital science in a simple way is not as easy as it might seem. We know that digital technology is everywhere. And yet, in order for people to understand how it actually works, they need to have it explained to them...which is where a scientific outreach specialist like Alain Couvreur steps in, the mathematics enthusiast and specialist in coding and cryptography who is making digital science fun! 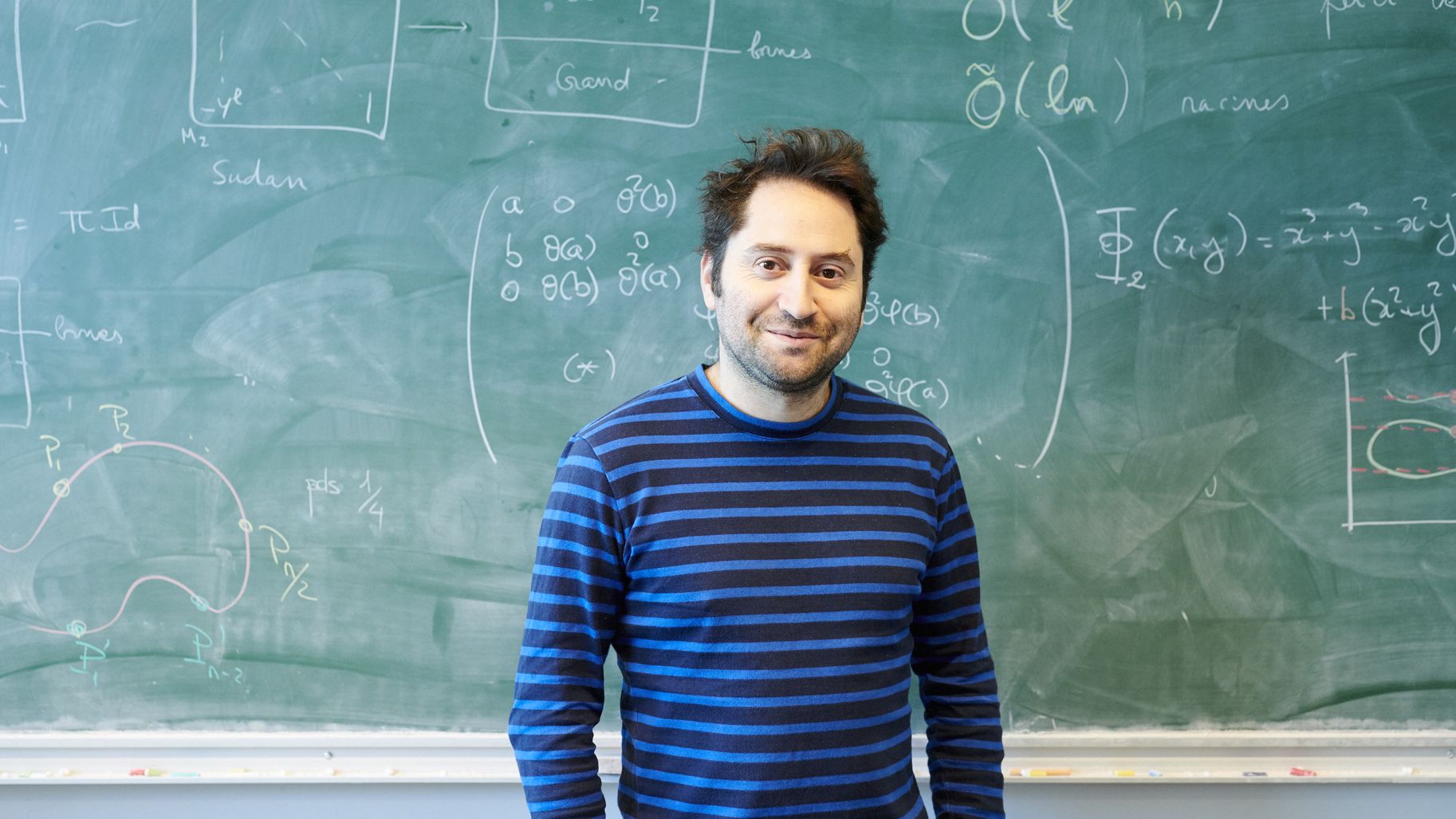 We arranged to meet within the glass and steel shell of the Inria Saclay-Île-de-France research centre, a stone's throw from the École Polytechnique. Alain Couvreur met us at reception, before taking us to his pared-down office, where the huge flat screen TV, various professional publications and a blackboard covered in equations all left us in no doubt that we were in the lair of an IT specialist.

Or should that be the lair of a mathematician? Because it was through Couvreur’s work in algebra and geometry that this former student of the École Normale and holder of an agrégationin maths gravitated towards coding theory. His aim? To identify mathematical solutions that would enable him to eliminate parasitic noise or disturbance caused by deficiencies in the physical medium used for the information and its transport infrastructure. With Alain Couvreur’s taste for practical experimentation , this was a match made in heaven.

Cryptography, the science of protecting information from malevolent attackers, would come later in his career. Meeting with Daniel Augot , the leader of his current team (Grace), and the person responsible for introducing him to the discipline, and with Jean-Pierre Tillich , a researcher at the Inria Paris centre working within the Secret team, would prove crucial in this regard, enabling Couvreur to develop two main areas of research, not entirely independent of each other.

The goal in both cases is to protect information, but while we have intruders on one hand, this is not the case on the other.

Although his research took up most of his time, he admits that he was “a bit sad to be working on a university campus without ever getting to interact with the students.” In 2014, he was given the opportunity to supervise the laboratory research programme of a 3rd-year engineering student at the École Polytechnique, an experience that would give him the desire to do more of the same. The École Polytechnique needed someone to take seminars in cryptography for 3rd-year engineering students and so Couvreur began a parallel teaching assignment, one which suited him and which encouraged him to change his ideas: “Often there is a lot of time spent on research without any progress being made. In teaching, at least a bit of progress is always being made: at the end of the lesson, the lesson is done” , he jokes.

From teaching to scientific outreach...to attract as many young people as possible

Less than a year ago, his colleague, Sylvie Boldo, who he had always known as “Madame Médiation” (“Mrs Outreach” ), was appointed deputy head of science, forcing her to give up her position as a scientific outreach specialist at the Saclay centre. With Couvreur’s experience in the field, having performed public lectures and made visits during La Semaine des Mathématiques, Boldo asked him if he would like to take over from her, following a period spent co-piloting outreach initiatives. Although he was hesitant at first, fearful of taking up time that could be spent on research, it wasn’t long before he would accept the offer - a choice he doesn’t regret making. “It gives me extra work to do, but it’s really quite refreshing.”

It is also, and perhaps most importantly, something he enjoys and which enables him to“break out of his bubble”.Couvreur is fully aware that his research is carried out in a highly privileged environment and that he teaches hand-picked students who wouldn’t be there if they didn’t have an interest in science.

Convincing secondary school pupils that mathematics can be fun and practical is another challenge altogether!

For Couvreur, who has three children of his own, trying to inspire young people, especially those who might be struggling, is a way of getting a bit closer to the real world. It also gives him the chance to contribute towards the wider aim of attracting teenagers towards the world of science. This sense of it being a vocation might stem from the first scientific outreach work he did for the the École Polytechnique in 2012, within the context of the programme Une grande école, pourquoi pas moi ?, (Why Shouldn’t I Go to a Grande École?) which saw him take young students from backgrounds far removed from academia on a visit to the laboratories, followed by an open discussion. The aim of this was to introduce them to the École Polytechnique, and to discuss science and career choices in order to boost their chances of continuing with ambitious studies in higher education.

Looking after what's already there and making the new sustainable

Since taking up the role, one of Couvreur’s biggest tasks has been to help organise the Fête de la Science 2019. He also carried out Sylvie Boldo’s very last scientific outreach project, which was to organise the first “Rendez-vous des Jeunes Mathématiciennes et Informaticiennes” event, held at the Inria Saclay Ile-de-France centre on 21st and 22nd October. The aim of this event was to encourage female secondary school pupils to consider taking up maths and IT, giving them the opportunity to work in small groups on open mathematical problems and to meet women working in these fields. The next big events on the horizon for Couvreur are La Semaine des Mathématiques and the Mathematical Olympiad, which are set to take place in early March and late May 2020 respectively.

Although his first events have proven successful, Couvreur still feels as though he has yet to properly find his feet. For the time being, his priority is to focus on making sure current initiatives are successful, as opposed to setting up new ones. This includes the major outreach project looming on the horizon for 2020, launched by Inria management in response to IT options being opened up in French secondary schools. The target set by Inria CEO Bruno Sportisse is to ensure that all fifth year pupils have the opportunity to meet a researcher in the flesh over the course of the school year. A gargantuan project, to which the scientific outreach specialists from Inria’s different centres replied “Chiche!” ("No problem!" in English).