Date:
05 Jul. 2019
Changed on 30/10/2019
Handling proteins, strands of DNA and carbon nanotubes at a nanometric level in order to create medications, materials or nanosystems ? This is now possible, thanks to the SAMSON platform developed by OneAngstrom, a young start-up with its foundations in ten years’ worth of Inria research. It already has more than 2,000 users in research centres and companies across the world. 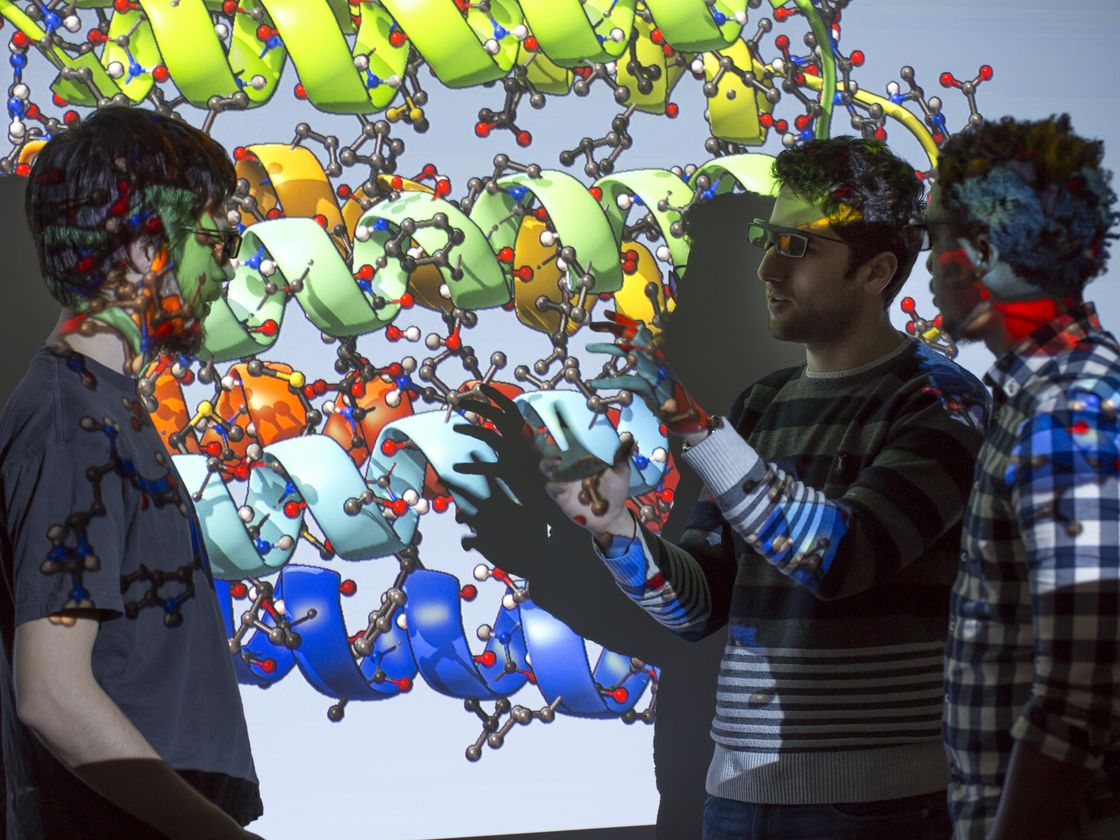 Molecular modelling is on the rise (+15% per year), proving particularly appealing to famous investors, including Bill Gates. Until recently, however, it had come up against one stumbling block: a lack of suitable simulation tools. Those working to develop them are experts in quantum mechanics, high performance computing or scientific visualisation. Their users are companies operating in the pharmaceutical sector, in biotech, in semiconductors, nanotechnology, etc. They are keen to develop new products, but have struggled to do so as a result of tools that are complex both to install and to use, with each one only handling part of the problem.

"OneAngstrom’s objective is to bring these two worlds together”, explains Stéphane Redon, the company’s co-founder and president. “On our SAMSON platform, all of the modelling tools are developed using the same kit, meaning they are compatible with each other. They are easy to use, displaying 3D images as opposed to lines of code. Gone are the days where you would need to be an expert to cut up a molecule, to stretch it until it reaches breaking point or to transplant antibodies: you simply download the required modules and launch your simulation.”

The innovation even goes one step further: SAMSON is capable of extremely fast simulation. In the best-case scenario, calculation becomes ten times quicker, an operation that previously took weeks. In other words, it makes it possible to carry out simulations that were previously impossible.

One single platform for users and developers

More than 2,000 users have already signed up to the platform. Research centres (MIT, Stanford, etc.), universities, specialist software publishers, companies, major international groups, etc. “At this moment in time, our goal is to validate this platform-based economic model. It has proved its worth in other sectors (flat sharing, modes of transport, etc.), but is a new arrival in the field of molecular modelling”

In this way, OneAngstrom brings two different groups together. Firstly, you have the users, who can choose to register for the tools they need. You then have molecular modelling developers keen to create new tools and services using SAMSON, before making them available on the platform. “Our model is similar to that of Android or iOS: it is necessary to supply a virtuous circle of satisfied users and developers seeking clients. OneAngstrom will thus be able to free up the revenue needed to continue to improve its technology.”

Ten years’ worth of research at Inria Grenoble Rhône-Alpes

SAMSON is the result of ten years’ worth of research carried out by the Nano-D team at Inria Grenoble Rhône-Alpes, a team that Stéphane Redon was in charge of. The team was awarded an ERC Starting Grant in 2012 - with more than 20 individuals working within the team at the time - and an ERC Proof of Concept grant in 2016.

Their research quickly turned towards this concept of an open platform and downloadable tools. To accelerate simulations, another key decision involved the use of so-called “adaptive” algorithms. Any modification made to a molecule results in the forces and energy levels between atoms being recalculated. With these algorithms, these calculations are only carried out on the areas affected by the changes made to the molecule. This is what makes SAMSON so time-saving.

“An institute focused on the creation of start-ups”

Over and above the scientific aspects, Stéphane Redon was supported by Inria when it came to making his corporate project a reality.

I was keen for the progress we were making to have an impact - I wanted to be able to break down barriers between disciplines. I was fortunate enough to be part of a research institute focused on the creation of tech start-ups.

From a practical point of view, Inria Grenoble Rhône-Alpes contributed to the direction taken by the Nano-D team in their research, providing much-needed administrative support for their ERC applications in both 2012 and 2016. The centre also funded the recruitment of an engineer in 2014 and 2015 for the purposes of designing the first version of the SAMSON Connect site. They drafted the contract for the transferral of software patents and repositories. Furthermore, they gave Stéphane Redon, a scientist with no background in business, the opportunity to study a course on strategy, marketing and accounting at the EM Lyon.

“Inria is a high-growth, stimulating environment, both before and after creation”, explains Redon. I regularly receive invitations to events where I have the opportunity to forge new business ties.”

OneAngstrom are also able to count on the dynamism of their market. By 2024, molecular modelling, a profession dealing with the infinitely small, is expected to be worth one billion dollars in terms of its global turnover. Companies within the sector are changing hands for astronomical sums: Accelrys, an American company, was bought out by Dassault Systèmes for 800 million dollars! Stéphane Redon is setting his sights a little lower. If the company are able to achieve a 1% market share in five years’ time, he will consider the launch to have been a success.