Date:
24 Oct. 2019
Changed on 03/01/2020
Winner of the Inria – Académie des sciences – Dassault Systèmes Award for Innovation, Marc Pouzet is a specialist in synchronous languages. His research concerns the design, semantics and implementation of programming languages to be used in embedded systems. Among other things, his research has led to the development of SCADE KCG 6, a language and environment used to make critical software for aircraft and trains.

“I discovered computer science more or less by chance at the end of the 1980s. I wasn’t at all what you would call a geek. I didn’t have a computer at home. ” Marc Pouzet was keen on science and thought he might become an engineer, although he wasn’t firmly decided. After studying science at the University of Lyon, he applied for a place on the newly created Master’s degree programme in Computer Science at ENS-Lyon. He very soon developed a real enthusiasm for this discipline, a combination of the abstract, the concrete, fundamental research and modelling. His interest grew even keener after reading Douglas Hofstadter’s works on calculability and programming languages. “I was fascinated by the idea of thinking up and building a program or making virtual objects with no tools other than a computer screen. ” 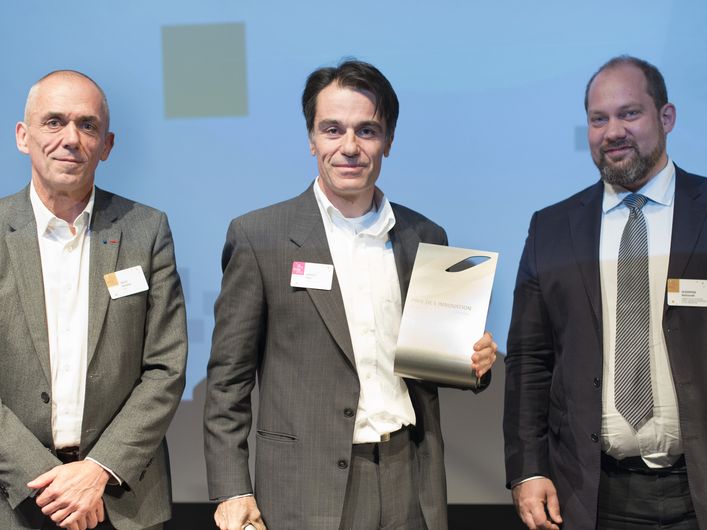 A career built on encounters

Marc Pouzet discovered programming research during an internship at Digital Equipment Corporation’s Paris Research Lab (PRL). That first experience convinced him to seek more discoveries further afield. He left Lyon to study basic computer science at Université Paris-VII. He completed his research internship with Jean-Jacques Lévy, head of the Para project-team at Inria at the time, and then went on to study for his PhD at the Inria Paris-Rocquencourt research centre, again under the supervision of Jean-Jacques Lévy. “My career was guided by a number of decisions, such as going to Paris and then to Grenoble, as well as a series of encounters and opportunities that I put to good use. ” Another important influence was Paul Caspi from the Verimag laboratory in Grenoble, where Marc Pouzet did his postdoc work. Paul Caspi was interested in the extensions of the synchronous language Lustre, that he had invented with Nicolas Halbwachs a few years earlier, and which led to the SCADE environment used to develop the Airbus flight control software.

Fruitful collaboration between researchers and engineers

Programming languages fascinate Marc Pouzet as they crystallise basic computer science issues and lead on to the development of concrete visible applications.

In 2000, he met Jean-Louis Colaço, in charge of the SCADE compiler at Verilog. “As time went on, we built an increasingly close working relationship. We tried out our ideas and published them in research articles. This collaboration is still going on and has advanced further with the arrival of Bruno Pagano. It has taught me that the boundary between research and engineering is porous and makes a precious contribution to science; I learn from engineers as much they learn from me. ”

Marc Pouzet’s intellectual and scientific adventure continued when he met Gérard Berry, one of the pioneers in synchronous language research and Chief Scientific Officer of Esterel Technologies, a start-up that developed a completely new compiler, called SCADE-6, in 2006, building on all the research carried out until then. Marc Pouzet admits that this success is his greatest source of pride: “Today, more than 250 airlines use SCADE for a variety of critical applications on board aircraft, including flight controls, graphical interfaces for alarm management, engine control and braking. ”

While Marc Pouzet is pleased to have been through “some exciting scientific adventures ”, he also admits to having met with some disappointments. He remembers his experience at Philips/NXP in Eindhoven in the Netherlands, where we worked on high-definition television. Working in the “holy of holies ” of applied research was a tremendous opportunity for him. But then came the 2008 recession. NXP’s software department closed down and the adventure came to an abrupt halt. “You can take risks, you can be ambitious and have hopes, but you can’t control everything. ”

The main thing for Marc Pouzet, who says he “has had a really good time ”, is never to lose sight of the impact of research on concrete applications. He reminds the young people he supervises that they should be “guided by considerations of practical applications. ”

He nevertheless insists on the difference between the engineer’s and researcher’s roles. The researcher can develop fundamental research on topics that come from industry. By working closely with industry, he or she can publish research results or write prototype software. Marc Pouzet also sees in this Award for Innovation a message to young researchers: “their research can have a real impact on development in their specialist field and gain recognition, because there is a genuine transfer of skills or knowledge. ”

Director of Research at CNRS in the Verimag laboratory, which he directs, Nicolas Halbwachs is, with Paul Caspi, the co-inventor of the Lustre programming language.
“I have known Marc Pouzet for more than twenty years, since he joined our Verimag laboratory in Grenoble as a post-doctoral researcher in 1994-1995. Then began a long and fruitful period of scientific cooperation on synchronous programming, in particular on a higher-order extension of the programming language, Lustre, that Paul Caspi and I had defined. Marc Pouzet works with great scientific and theoretical rigour. But, unlike many other researchers, he looks beyond the theoretical level. He takes his research to its practical applications, finds solutions to the problems that these applications might pose, and develops transferable tools. This blend of research and focus on applications is very rare.”

President and CEO of Esterel Technologies, a company specialising in development tools and software for embedded systems.
“Marc Pouzet is a scientific advisor to our Research and Development teams. When we launched SCADE 6, a new generation of our products, we turned to Marc Pouzet and his laboratory, as he was already a prominent figure in French computer science research. We needed to push back the boundaries of the state of the art. Marc Pouzet brought us his expertise, especially in the fields of compilation and theory of languages. Marc knows them all! He is perfectly at home not only with theory, but also with the practical side. Our collaboration with Marc Pouzet has contributed to the success of Esterel Technologies.”