Date:
01 Oct. 2020
Changed on 09/03/2021
Each year, the L'Oréal-Unesco Awards recognize talented young women researchers. Cécile Patte, a doctoral student in the MΞDISIM team, a joint venture between the Inria Saclay - Île-de-France center and the Solid Mechanics Laboratory of the École polytechnique and the CNRS, is one of the 35 winners of the Young Talent Prize "For Women in Science" awarded each year by the L'Oréal Foundation and UNESCO to promote women in science. 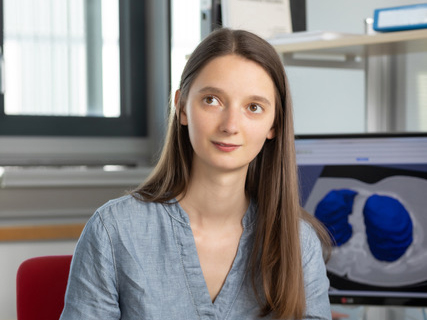 The L'Oréal Foundation and UNESCO's "For Women in Science" award recognizes young scientists working on exemplary and promising research topics. A true international recognition, this prize rewards Cécile Patte for her work on poromechanical modeling of the lung applied to pulmonary fibrosis, but also for her ability to transmit her passion for science.

A concrete problem for doctors

During her thesis, Cécile Patte studied the lung, and more particularly a pathology that can affect it: idiopathic pulmonary fibrosis. This subject was born following the questioning of doctors at Avicenne Hospital (AP-HP) who treat this serious condition characterized by lung tissue damage.

To assist them in the diagnosis, prognosis and understanding of this disease, the doctors called on the MΞDISIM team, whose specialty is to formulate and analyze innovative numerical models and methods in the field of tissue and organ biomechanics, based on clinical data, such as medical imaging for example.

"I chose to study biomechanics so that I could contribute at my own level to medical progress and be useful to society. After discovering the significant advances made by the M3DISIM team in cardiology, I immediately wanted to join them."
Cécile Patte

Towards a digital lung twin

Cécile Patte first worked to develop a mechanical model of the lung, a kind of digital twin, which allows to virtually reproduce the deformations of this organ during breathing, by integrating the mechanical characteristics of tissues related to their porosity or intrinsic rigidity. This model was then enriched and customized for each patient based on his or her clinical data.

As pulmonary fibrosis leads to a rigidification of certain areas of the lung, the objective with this digital twin is to estimate the mechanical properties of the different zones (healthy or diseased), in order to perform regional measurements of rigidity, necessary to diagnose and monitor the evolution of the disease. In the longer term, it is also conceivable that this monitoring could be used to test the impact of drug treatments that ideally cure, or at least slow down the disease.

Doing science and disseminating it

Cécile Patte began her scientific training at the Mines de Saint Etienne where she chose to develop her knowledge in mechanics and materials with a biomedical specialization. She joined the M3DISIM team in 2017 to complete a thesis supervised by Dominique Chapelle, Inria research director, and Martin Genet, lecturer at the École polytechnique.

In parallel to her thesis work, Cécile has been involved in several scientific mediation actions to give a taste of science to young people, such as the Fête de la Science organized at Inria or the Rencontres des jeunes mathématiciennes et informaticiennes (meetings of young mathematicians and computer scientists) led by the associations Animath and Femmes & mathématiques.

"This prize is a true recognition of my thesis work, but also of my career path which I hope will inspire many young women to go beyond prejudices and to embark on scientific careers."   Cécile Patte