For Jean-Baptiste Mouret, robotics is fantastic

Date:
16 Dec. 2016
Changed on 07/04/2020
Specialised in artificial intelligence and robotics, Jean-Baptiste Mouret joined the Inria Nancy - Grand Est centre in May 2015. As a member of the Larsen team, he is brilliantly putting in place the project that earned him an ERC grant. Here is a look back at the success story of this young 35 years old researcher. 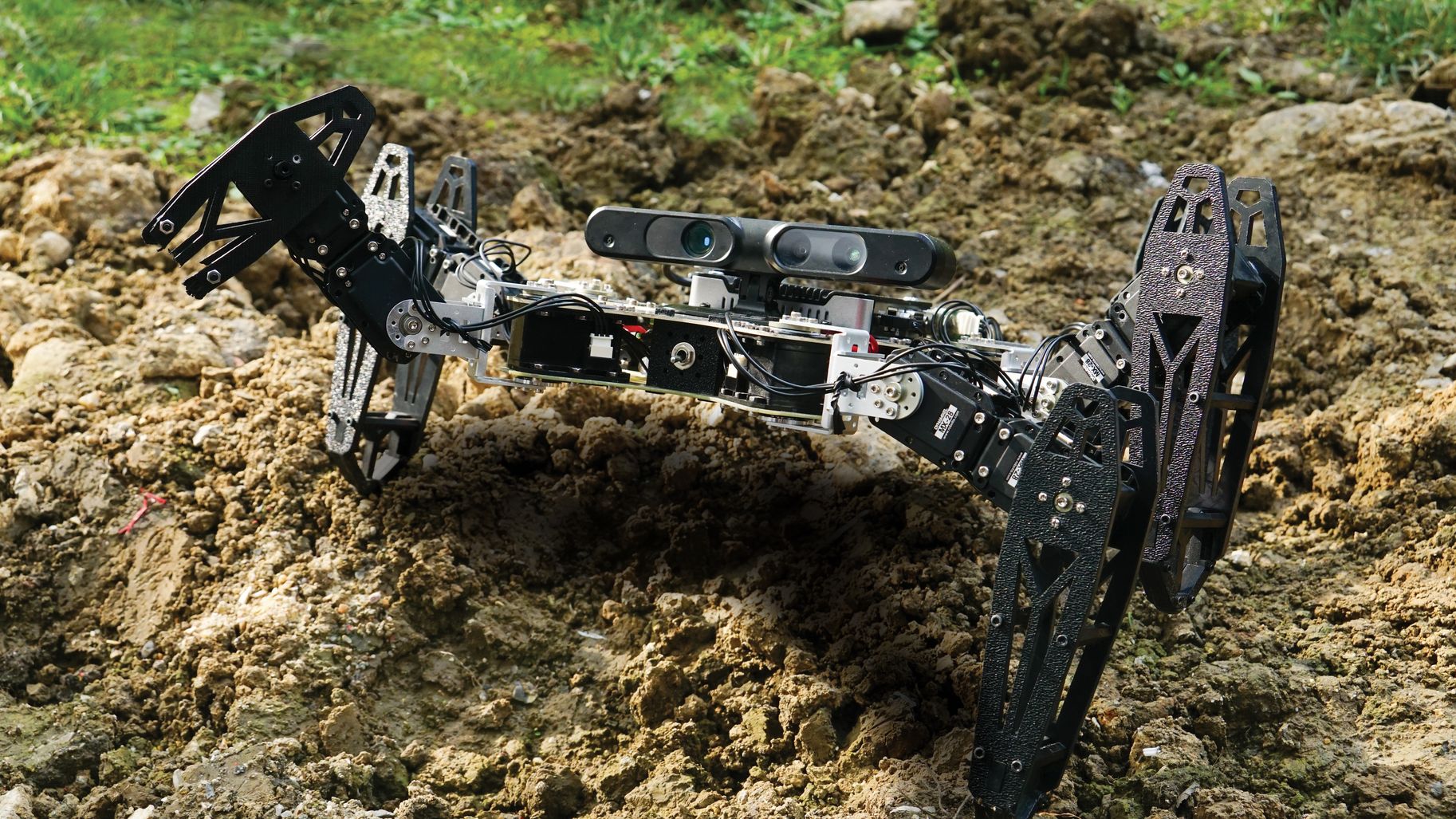 A career guided by passion...

His career began in Paris. He first attended the graduate school EPITA, a reference in computer science, where he affirmed his interest in the computer sciences. Driven by a passion for building robots, sustained since his secondary school years through robotics competitions organised across the whole of France, he continued his studies at the Université Pierre et Marie Curie (UPMC). There he completed a Master's before embarking on a thesis on bio-inspired artificial intelligence, more specifically about how to take inspiration from natural selection to make computers more "creative". He was then recruited by the UPMC as a lecturer, following the creation of the Institute for Intelligent Systems and Robotics (ISIR) in 2009.

Alongside a series of visits to the University of Vermont and Cornell University in the United States, and the Technische Universität of Darmstadt in Germany, in 2015 Jean-Baptiste received an ERC grant to support his research project. With a view to benefiting from an ideal working environment for this project, he decided to join the institute, renowned for the excellence of its work in computer science and mathematics. But what does this project consist of? What are the ins and outs of it?

The ResiBots project: tackling a classic problem from a new angle

Besides a few controlled situations (e.g. manufacturing industries), current autonomous robots are both fragile and unable to continue their mission as soon as they break something. This fragility limits their use outside of factories.

When a damage happens, the traditional approach would be to diagnose what is broken and apply the appropriate treatment.

Problem: performing an “auto-diagnostic” is challenging for an autonomous robot, but also it requires adding many internal sensors, which, in turn increases the complexity (and therefore the price).

His ERC project proposes working from a new angle: using a trial-and-error learning algorithm to find a way to offset the damage. "Careful, it is not a question of the robot repairing itself", Jean-Baptise warns. The aim is more the management of the problem than its complete solution. A form of breakdown tolerance that allows the robot to continue to function in damaged mode without having to identify the source of the problem. These are referred to as "resilient robots".

This ERC is the result of a long process. Firstly, questions specific to the research field: where can robot learning make a difference? "Everybody wants to make robots that can learn, but other techniques are actually often more appropriate", Jean-Baptiste emphasises. Then there is the desire to help robotics to be adopted in many contexts.

In 2006, Josh Bonguard published an article (in the journal Science ) on resilient robots. Inspired by this publication, Jean-Baptiste decided to assist this professor of the University of Vermont for three months in his laboratory, in order to familiarise himself with the problem. 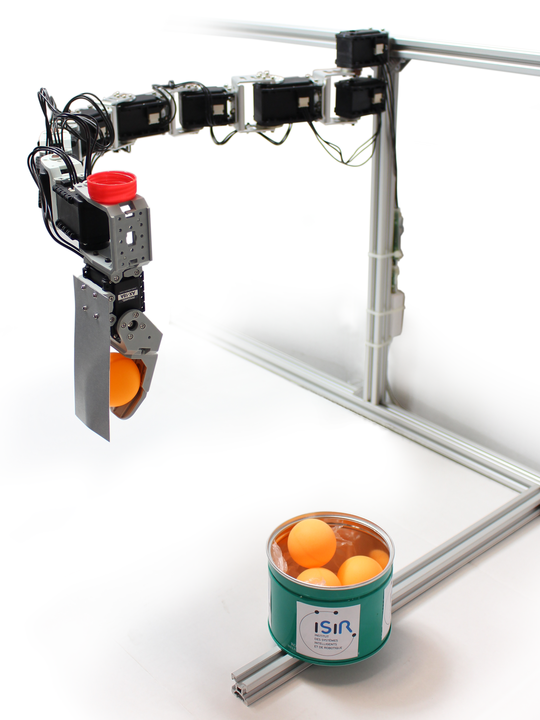 A major scientific issue lies at the heart of Jean-Baptiste Mouret's work: how can we enable the robot to learn with only a few trials? For example, if a natural disaster should strike any area, the robots sent there must be capable of adapting as quickly as possible, despite being in a situation that for which it is unlikely to be perfectly prepared, in order to perhaps make it possible to save lives...

Today, with his team of two PhD students, two post-doctoral students and an engineer (soon to be two), Jean-Baptiste Mouret is working on three types of robot: a hexapod robot, equipped with six legs and potentially adapted to post-disaster situations; a mobile manipulator, built on wheels and which has an arm, useful in warehouses and industries for example; and finally, the iCub, a humanoid robot, more complex but which offers more possibilities.

On the cover of Nature 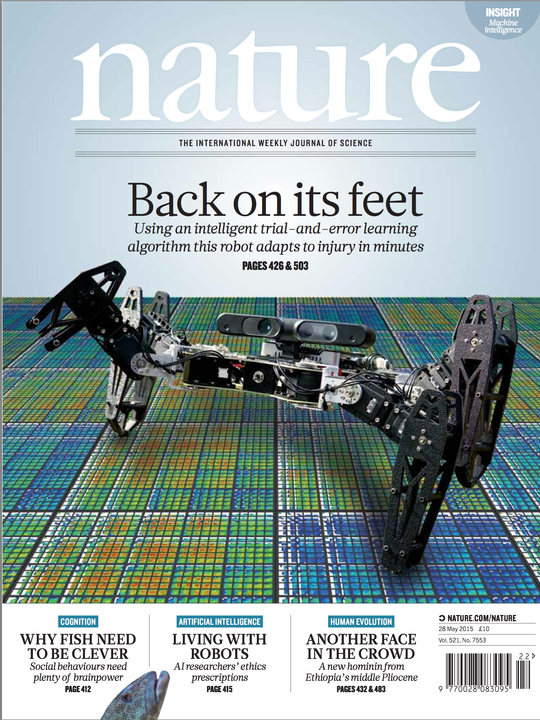 In 2015, the promising researcher was revealed through his ERC and by the cover of Nature . Since then, he has been in high demand by the most prestigious media, Le Monde , The Times , and also The Washington Post ... A real opportunity for Jean-Baptiste to get his work known, so that others may perhaps use it in their own projects.

His daily motivation lies in an intuition: that the majority of robots, whether devoted to assistance, exploration or military applications, will increasingly need to adapt to unforeseen situations. There is still a long way to go, but what is at stake is exciting!